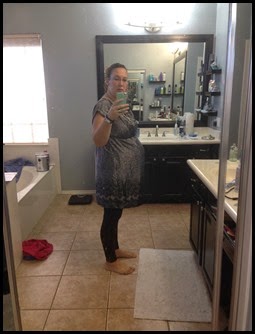 Size of Baby? About the size of an eggplant

Maternity Clothes? Yup, still wearing them..  This question is irrelevant until I’m like 8 weeks post partum now because I can guarantee I’ll be wearing maternity clothes until at least then.

Sleep? I tend to sleep pretty well right now – probably because I’ve been so busy that I crash when I go to bed.  Sometimes I get up to pee around 1-2am and sometimes I make it until 6-7am before I wake up.  However, whenever I do wake up, I’m roasting and have to kick off all my covers.  Still have pain, but it’s manageable.

Best Moment This Week? Hearing his heart beat again at my appointment last week, and feeling him move a bunch.

What I am loving? Nothing specific, I just like being pregnant in general.  Sure it has it’s not so fun aspects, but in general, I really like it.

Movement? I’ve been feeling him more and more on the top of my belly and on the sides.  He moves quite a bit now.  When I get really busy sometimes I don’t notice him move much, but typically as soon as I focus on him, I feel him move quite a bit.  A lot of times I wake up and I’m kind of on my belly/side and he’s kicking away, kind of like he’s telling me to get off of him.  And if I wake up and don’t feel him kick then I worry and don’t fall asleep until I feel him again.

What I’m looking forward to: Having him.  And having the damn 3 hr glucose test behind me so I can quit worrying about it…  And starting to get his room/clothes together.

Other Updates…I had my 1 hr glucose test this last week.  I was dreading it because I knew I got 139 at my last one around 28 weeks and this office’s cut off was 140.  So I figured it would be close.  I got 141….  Grrrr…  I’m really annoyed and frustrated and now I have to go take the 3 hour one and spend 3.5 hours at the dr’s office and pay for childcare and find the time to do that.  So I can’t even take it again until Friday, which is over 8 days from when I took my 1 hr one.  I’m too busy to deal with this stuff, and if I do end up having GD, that’s REALLY going to put a wrench into things.  I already have to start going to the OB every 2 weeks from now until 36 weeks and then it’s every week.  If I have to start going in for growth scans and fluid checks and NST’s all the time, I just don’t know how I’m going to fit all of that into my busy work schedule right now.  Not to mention taking Ben to all of those sounds like a special version of hell.  It stresses me out but I would put money on me flunking the 3 hr glucose test also.  I know this baby will be worth it but I just don’t have the time, ambition or desire to deal with sticking to a diabetes diet right now.  It was HELL for the 2 weeks I had to deal with it during Ben’s pregnancy, let alone doing it for 3 months.  Ugh.