So I finished my first quilt at the end of November and it’s been sent to the States to be given to my grandma for Christmas.  Originally, I had made it for Abbie, but I decided to give it to my grandma instead.  I know it’ll bring her much more joy than it’ll bring Abbie right now, and it’ll have more meaning for Abbie when she eventually inherits it after her great-grandma used it.

It was a huge learning process and if you look at it closely you can see numerous mistakes, but I’m okay with that.  It was my first try, and I wasn’t expecting it to be perfect. 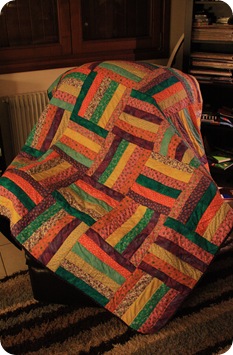 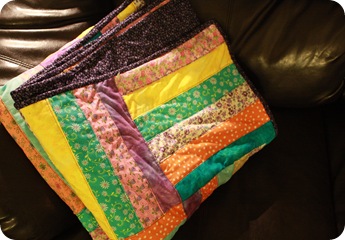 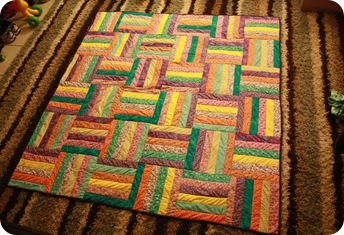 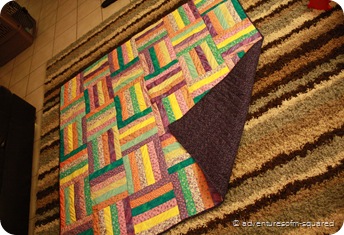 I haven’t done any quilting since I finished it and I’m excited to get back into it after the holidays.  I’ve been eyeing a bunch of fabric online that I’d love to turn into something, but I have a bunch of fabric here that I need to figure out what to do with also.  It’d be much easier if I could just go to the store and find fabric that coordinate with what I have already to make a quilt, but they really don’t sell quilting fabric over here.  They do, but it’s like half of one shelf, and mostly prints instead of solids.  I heard an Italian quilter speak at a luncheon I went to last month, and she said that they order all their fabric from the States because nothing is available in Italy.  My mom gets lots of phone calls asking her to get me stuff from Joann’s and Hobby Lobby.  (Thanks mom!)

Anyway, I think my first quilt is pretty and I like it.  I hope my Grandma does too!

That is great! So, when are you going to come over and teach me?

That's beautiful, Monica! I talked to Grandma yesterday and we talked about how one of the nicest gifts a person can get is a blanket. She sounded great and she'll be so moved that you gave her something that will eventually transfer her touch to Abbie's hands. Love your Amsterdam photos, too :)