I started this quilt back in 2010.  Originally I was going to give it to Abbie, but then I decided to go a different route with it.  It was the first quilt I pieced together by following a pattern.  I learned a lot making it.
My cousin had a baby in September.  She didn’t find out the gender until the baby was born, but her husband knew so I contacted him and asked him if girl colors were okay for the quilt, and he said yes.  This was in July or August I think, so I knew there was no time I would be able to make a full quilt by September, so I decided to give this one to little Zaley.  Even though I had the quilt top done, I still just finished it in December.  Mark being off for a few holidays and us not traveling during them make it SO much easier to spend time quilting.  Ben is in to EVERYTHING now, and since I quilt at our kitchen table, it makes it tough to concentrate on anything but him for more than 30 seconds.  Hence Mark being home helping a LOT. 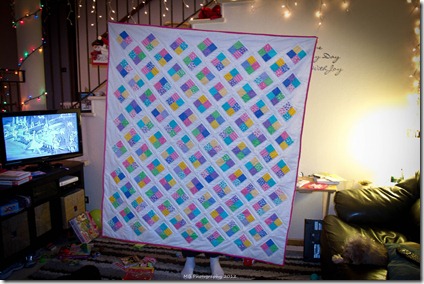 I love the pink binding.  I think it really makes the front of the quilt pop, and I like that. 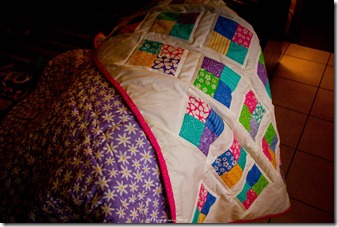 I decided to quilt this by just outlining the squares.  My free-motion quilting still leaves much to be desires and I wasn’t sure how to FMQ such a symmetrical quilt anyway, so I did the outlining.  This quilt was a little bit big for my machine though, and trying to get it to fit into the neck of my machine to quilt was a bit challenging at times.  I think I would probably pay someone else to quilt a quilt this size next time and stick to quilting the smaller baby quilts on my machine.  This one was pretty big for a baby quilt, since I had originally intended it for Abbie. 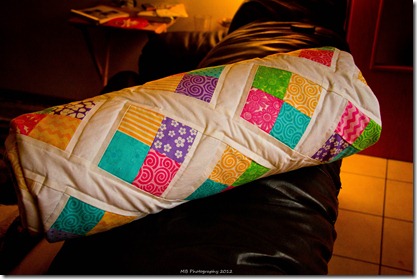 I hope they get lots of use out of this quilt!  I’m happy with the way it turned out and I learned a lot quilting it.  Hopefully I can pick up speed a little bit on my quilting where it doesn’t take me so long to finish them!  In our house in AZ I will have a much better quilting space so I think I will spend more time quilting than I do now. 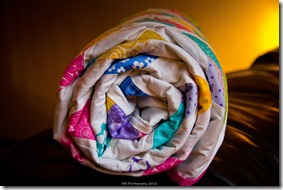 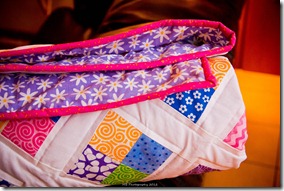 BEAUTIFUL! Great job, Monica! I really like the pattern and the pop of color...I'm sure your cousin and her daughter will be super blessed by the handmade gift and it will become an heirloom item in their family.

That's really cute Monica! I'm usually not super big on quilts but i really, really like all those colors and patterns!!

Fun!! It's a neat size too. Bigger then the baby quilts I've done, but not too huge. I think I could still get something that size thru my machine to quilt it myself. YAY for being done!! :)

Monica, you did an awesome job on this quilt. Way to go!