We’re having a baby tomorrow! (Take 2) 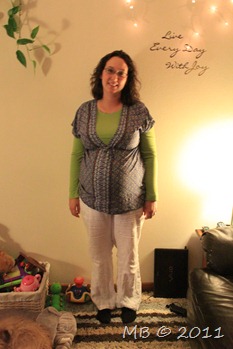 I’m being induced tomorrow.  I was looking back on my blog at my account of Abbie’s birth and how I was feeling the day before I was induced with her.  (You can read that here.)  It’s kind of amazing how differently I feel this time around.  I really wish I felt the same way I did with her, but I don’t.  Honestly, I’m scared.  I feel guilty because everyone is asking me if I’m excited to meet my little boy, and I am, but I haven’t even thought about meeting him much.  I’m so focused on getting him out and all the problems that I could have with that, that I haven’t really thought much past the actual birth.  I’ll probably be so relieved to actually get him out okay that I’ll pass out after he’s born.  I did that once with a tetanus shot.  I was SO worked up about it that I passed out after I got it because I was so relieved it was over with.

Monday I had another NST and I met with the doctor who will be delivering our baby for the first time.  They have three doctors and a midwife on base, and I’d met the other 2 dr’s and the midwife, but not this dr.  I wish I had met him a long time ago.  I’d typically be nervous about having a male ob/gyn, but I REALLY like this guy.  He has a very calm, soothing demeanor about him, and he almost immediately put me at ease.  He was easy to talk to and smiled a lot and threw in a few jokes where appropriate and he knew when to be funny and when to be serious.  I pretty much drilled him with questions and he answered all of them honestly and without delay.  I didn’t feel like he was trying to beat around the bush at all, or sugar coat things for me, but on the other hand, he was very reassuring at the same time.  I told him all of my concerns, what I was afraid of, my experience with Abbie, what I was hoping for this birth and he was agreeable with everything I said.  He told me that he doesn’t see why there’s any reason I won’t be able to deliver vaginally and if that’s what I want, then he’ll do his best to make that happen.  I told him how people have me all freaked out about a shoulder dystocia with this baby and he said part of that is because on of the doctors here had a shoulder dystocia when they were in their residency and they lost the baby.  So that person is extra sensitive to shoulder dystocia’s and takes a very cautious approach to them.  But this doctors approach was that he thinks everything will be okay.  He said it’s his job to worry about that if the time comes and that he will be prepared for the worst but planning for the best.  There are a whole list of maneuvers they can do if a baby does have a shoulder dystocia and he said he’s never had to go past the fourth maneuver in his 10 years of being an ob/gyn.  So all of my chat with him was pretty reassuring, but I’m still scared.  I just want the birth to be over with, so I can start focusing on my baby boy and not worrying about the birth.

I had an ultrasound on Friday.  I was 38w1d and he was measuring 40w5d and weighed 9lb5oz.  My dr was laughing because the cut off for them offering me a primary c-section was 4250g, and baby boy was like 4232g, so he BARELY missed the cut off for that.  But it’s a moot point anyway since I don’t want a primary c-section at all.  If it comes to that, eventually, then fine.  But I’m just happy they’re going to give me an opportunity to have him vaginally.

I’ve been having some contractions lately.  They’re not consistent, but my whole belly gets as hard as a rock and it gets a little hard to breathe and is just kind of uncomfortable.  They don’t necessarily hurt, but sometimes I have to breathe a little funny through them.  I was timing them a few nights ago and they were coming about every 10 minutes and lasting about 2 minutes.  If I’m out and about, I have them pretty regularly, but if I lay down or put my feet up, they usually go away.  I had one of them wake me up last night, but it was mainly because I had to pee and the contraction made that even more noticeable.  Hopefully that means I’ll be more than 3-4cm dilated tomorrow when they induce me.  A few of my friends have said I look like I’ve dropped quite a bit, but I have no clue.  I can’t tell if I have or not.

So tomorrow is the big day.  I’m hoping and praying that everything turns out okay and that he doesn’t get stuck.  I’ll be very glad once the birth is over with.  Abbie is pretty excited about having a baby brother.  My friend, Jennifer, is going to come over early tomorrow morning to stay with Abbie for a day while Mark is with me at the hospital.  Then he’ll come home to be with her and he might drop her off with other friend later on so he can spend more time with us during the day without having to chase Abbie around.

Time to go get a few more things done and ready around the house! 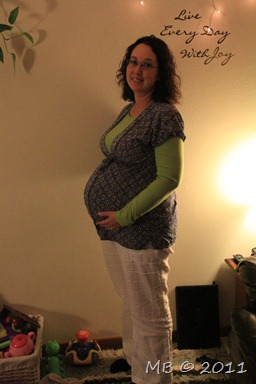 I'm thinking about you Monica, and sending you all the positive vibes I can muster across the ocean. Relax, my friend. All will be well. I"m so happy that you love your doctor. It's too bad it took so long to meet him, but I'm thrilled you found him afterall.

You do look like you've dropped in your side-shot pic. I can't wait to hear about allthe details, I know you'll get through today just fine! You are such a brave woman as ot is, that this will be a breeze. Lots of love from Iowa!!

I am so excited for you! I am sure everything will be wonderful. You're having a baby!

Congratulations! I will be thinking/praying about you all. You look beautiful! Your doctor seems great, and even though you're nervous I hope talking to him put you a little at ease. I can't wait to hear about the birth and see pictures of him. You're going to do great and everything is going to work out fine. Hugs!

I am glad you got a good Dr! Everything will be perfect for you, congratulations! Enjoy the time with the new one, they grow up quicker than the first (so it seems!)

Sending you our love and prayers! I'm sure everything will go very smoothly for you. Just relax and enjoy the experience as much as possible. Can't wait to hear all about your new little boy!