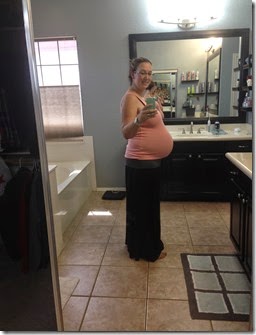 Size of Baby? I’m not sure, but he feels big…

Maternity Clothes? My maternity clothes are starting not to fit..

Weight Gain? I’ve been losing weight these past few weeks.  I think I’m around 14-15lbs up now.

Sleep? These past few nights I’ve actually slept almost all the way through the night.  I wake up around 5-6am sometimes to pee and then go back to bed until 8:30-9am.  Yes, I’m lucky Ben lets me sleep that long and Mark takes Abbie to school…

Food Cravings? To just eat normally.  We ate at Smashburger the other day and I had 5 teaspoon fulls of a chocolate oreo milkshake which made my blood sugar spike big time.  It was around 160 at 2 hrs.  (Supposed to be under 120…)  Speaking of my sugars, they’re a bit all over the place.  My after dinner numbers have consistently been higher lately – in the 140’s – 170’s.  I’m currently taking 3.75mg. of Glyburide before breakfast and before dinner.  Sometimes by after breakfast numbers have been a little high too (130-140’s).  They’re all supposed to be under 120 after 2 hrs.  Things that I can eat sometimes that give me decent numbers make them high the next time I eat them, so I’m not sure how to deal with it.  A lot of it is that I don’t have the energy to make food – specifically cooking proteins – right now.  All I know is that someone better bring me a chocolate oreo milkshake, or Cold Stone’s Chocolate Devotion, and a fountain Pepsi in the hospital.  I’m over this diet.

Best Moment This Week? He passed the NST and BPP’s these past 2 weeks fine.

What I am loving? Being out of the hospital…. Landed myself in the hospital for 3 nights with yet ANOTHER kidney infection just before 35 weeks.  I’m not sure how I keep getting these, but it wasn’t fun.  I went in on a Thursday night because I had a slight temp and some back/ flank pain, so I went to triage and they said I had another infection.  Thursday night I got worse and had a temp up to 103 and kept getting chills and then sweating and that kept up for all of Friday.  Friday night I finally got rid of my fever for good (like around 4am), but I had to be 24 hrs fever free before they’d let me out so I didn’t get out until Sunday afternoon around 1pm (Easter Sunday).  I was prepared to spend the night in the hospital this time, but not 3 nights, but I know I wouldn’t have been able to rest like I did in the hospital if I was home around the kids.  Now I’m on a low dose antibiotic until I deliver to prevent me from having another one.

Movement? Yep… he moves all the time.  And sometimes it hurts because he’s kicking and stretching or something.  He’s running out of room in there for sure.

Other Updates…  Dr Colwell checked me at my 36 week appt and I was 3cm dilated, 80% effaced and he was at –1.  We were supposed to go to CA to check out our new base/area and she told me not to go, so we cancelled the trip.  I’ve been having some decent contractions.  They don’t hurt, but they make it hard to breathe.  I’ve had a few back contractions also, which is a first.  Today I had a contraction that was both front and back, for the first time.  I am really hoping that I have him next week.  I’m going to start walking more, which typically gives me pretty good contractions, so hopefully it’ll be enough to kick of labor.  I’m having more pelvic pain also so I feel like he’s dropped even more.  Cooking dinner is a pretty big chore now and I have to sit down a few times, at least, when I’m cooking to catch a breather.  All this while keeping our house clean for showings… Not sure life will be much easier with a newborn though, but at least my mom will be here to help next Thursday!!

This pregnancy has felt like it's gone SO FAST!! And your babe could potentially share Charlie's birthday of April 30th!!!! Can't wait to see your little one and excited for you to decide on a name :).