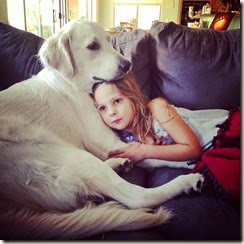 I’m not the only one that would have a hard time leaving Sammer.

It’s that time of year for us again, or every few years, I guess.  We are due to find out our next assignment any day now.  When we moved here in March of 2013, they told us we’d be here at least 3-3.5 years.  Well, if you’re math is decent, you realize that was 2 years ago and we are already finding out our next assignment.  Liars.  Good thing we bought a house….

So the best possibility would be that Mark gets chosen to transition to the F-35 and we get to stay here for the next few years.  This would be amazing for many reasons – mostly because we’d get to stay and not have to move shortly after having our 3rd baby.  We finally have amazing neighbors right next door and the kiddos love running back and forth between our houses.  I could keep my real estate license active and continue working.  Abbie would be able to stay in a great school and not have to switch schools for the 4th time in 3 years.  Our house could appreciate more and we could do the upgrades to it we’ve been wanting to do.  Mark would pretty much be non-deployable and flying the F-35 would open up more possibilities for jobs after his AF career is over.  We wouldn’t have to try to find a place to rent with 3 dogs and 3 kids.  I could go on and on.  However, this could be a slim chance of him getting this.  I think quite a few people on this VML (Vulnerable to move list) put transitioning to the F-35 as their top choice.

The worst possibility would be that Mark gets assigned to Kunsan, Korea, and go there for 12+ months by himself.  It’s not really feasible to take 3 kids to Kunsan since they don’t have schools over there for Abbie and we wouldn’t be command sponsored.  Mark would be working a lot and he could have to live on base so he might not be able to live with us anyway.  When guys get stationed there and they just have a spouse, it’s a lot easier for the spouse to go as kids complicate everything.  I wouldn’t 100% rule out trying to go with him, but Mark has said if he gets Kunsan, he would prefer us to stay here than go with him.  He didn’t even put this on his ADP (his dream sheet) so he’s a non-volunteer for any Korea assignment but the most openings out of any move we could do would be to Kunsan.  They need pilots there and they said your best chance of staying in the jet is to go to Korea.  Luckily Mark doesn’t necessarily care if he stays in the jet.  He would like to but not if it means being away from his family for a year, including a newborn.  He’d miss pretty much the entire first year of this baby’s life.  And thinking about raising 3 kids, including a newborn that doesn’t sleep, along with 3 dogs for an entire year is enough to give me a panic attack.  I seriously don’t know how I would remain sane doing this for a year by myself.  I don’t have family nearby.  Most of my friends will be moving in the next year or so.  I would pretty much be on my own as a single parent and that scares the absolute shit out of me.  If this wasn’t at all a possibility, I wouldn’t be half as nervous about getting another assignment, but it is.  I am just praying to God he doesn’t get it.

Mark basically put after on his ADP that he is willing to go anywhere, as long as it’s an accompanied assignment.  Even if that means not flying the F-16 anymore, his preference is to be able to have us come with him.  A good possibility would be going to Holloman in Alamogordo, NM, which is in the middle of freakin no where.  The schools are crappy, the area has pretty much nothing except a Wal-Mart, the housing market isn’t that great, but at least we’d be together.  I could handle any place for 3 years as long as I’m with Mark.  I wouldn’t even mind going to Osan, Korea if he could get an accompanied tour there.  I’d just have a hard time leaving Sammer and the other dogs behind.  I’d just have to keep myself busy with crafts or something, but it would be do-able.

There are a bunch of other possibilities, although the chances of getting them are quite a bit less than getting Kunsan or Holloman.  We could go anywhere from Alaska to Nevada to Utah to South Carolina to Mississippi or Texas to Japan to Germany to Italy again plus more that I probably don’t even know about.  I would love to go back overseas but Mark isn’t so sure he wants to go back into the CAF (combat Air Force).

We found out months ago (November??) that we’re going to be on the spring VML and we probably won’t find out until March what our next assignment is.  I wish there wasn’t so much time in between when we found out we could move to where we’re actually moving because I get more and more anxious as time goes on.  Mark is usually the calm one about all of this but I think this time he’s just as anxious as I am.  I do love moving and love meeting new people and seeing new places and we’ve gotten really lucky with our assignments so far.  I just hope our luck hasn’t run out!

Can I cross my fingers for Eglin or Hurlburt? ;-)

I hope you guys get an assignment that works for you all. I can't imagine how hard it's going to be deciding what to do with everything!!

You guys are still waiting, aren't you? :( I'm late to reading blogs...I hope you find out soon for your sanity's sake, and I'm praying it's not Korea for him; I appreciate you being honest and saying how much that assignment would suck (to have to go at it alone—I think too many military wives put on the Super Woman front that they can do it all. Um...no!) Thinking of you!

(And if you go to Alamogordo I'll hook you up with several friends I know who live there!)