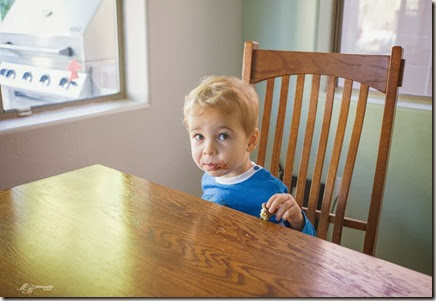 One more month until the big 02!!  This little guy is changing almost daily now.  He’s hard to keep up with at times! 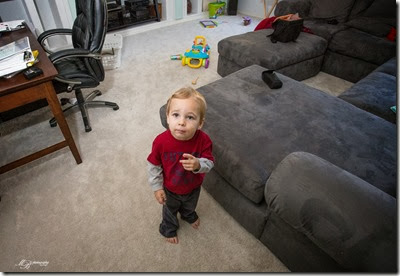 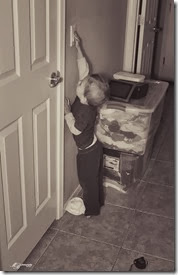 Ben is in to everything and anything now.  If he can reach it or somehow get to it, he will get into it.  This month I was going to the bathroom and he, of course, as in there with me and got underneath the sink and got into a bathroom cleaner and sprayed himself with it.  Thank God it wasn’t in his face, but it left a nice bleached spot on his shirt.  (See picture of him running outside below.)  So I locked it so he couldn’t push the trigger any more and the next thing I know he’s sucking on the end of it.  Ugh.  That bathroom has a lock on it so he can’t get into it, by the way.  The next day was my first call to Poison Control, since he found grill cleaner underneath a cabinet on our grill (I didn’t even know it was there), and sprayed it all over himself and ate some of it also.  If I get gray hairs, it’s going to be from this boy, for sure.  Luckily they said it wasn’t any big deal and that if he wasn’t throwing up or coughing, he was fine.  He also tripped over Ollie and went head first into the front of the toilet and got a HUGE goose egg on his head.  Of course it happened right before bed, so we were nervous to put him to bed incase he had a concussion or something.  Again, he was fine, except for a huge black and blue lump on his forehead for a few days. 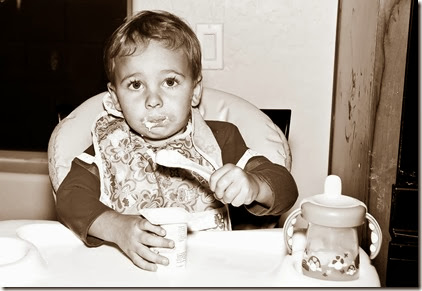 He’s able to put 3-4 words together now, and repeats pretty much anything you say, at least the last word anyway.  “Ben, do you want milk or juice?”  “Juice?”  “Ok, you want juice?  Or do you want milk?”  “Milk?”  “Yeah, juice or milk.  What do you want to drink?”  “Drink?”  You get the idea.  He’s to the point where he knows exactly what he wants, and he’s starting to be able to tell us, although sometimes it takes us a while to decipher exactly what he’s saying.  If you don’t understand him right away, he gets frustrated and then screams.  Great fun.  I love the 20 month to 3.5 year ages…  They are great. 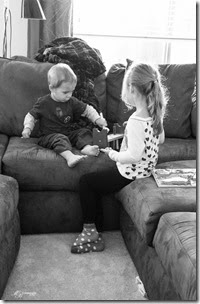 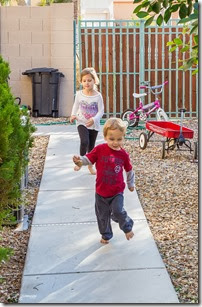 He is CONSTANTLY watching Abbie to see what she’s doing and then trying to copy her.  If Abbie does something, you can guarantee Ben will be doing it along with her shortly.  If Abbie plays with something or wears something or does something, Ben is her little side kick.  They are actually starting to play together now, but he’s also starting to throw his weight around a little bit, which is kind of funny to see.  There have been a few times where he hasn’t liked whatever Abbie did and he grabs on to her shirt and yanks and pulls and yells and won’t let go.  One time he was doing it because he was frustrated about something, and between him grabbing her shirt and trying to pull it and not being able to pry his strong little fingers off of it, and the look on Abbie’s face when he was doing it, I just started to laugh.  Abbie laughed with me but Ben didn’t find it quite as amusing.  Abbie is getting a lot better with him for the most part and I can see them being good friends in the future.  He really looks up to her right now and hopefully it’ll stay that way.  She’s a good person to look up to. 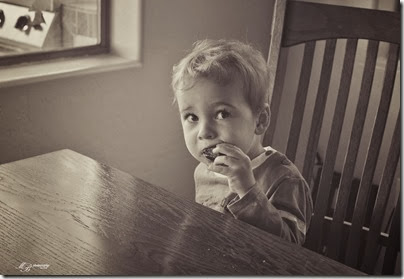 Ben is usually happiest when he’s eating.  Although the other day, Sarah and I went to Chick-Fil-A for lunch with him and he saw the play area and threw a HUGE fit because he wanted to play and not sit and eat.  It took BOTH of us a good 3 minutes to get him in that stupid high chair.  He’s a strong little turd when he wants to be and I still haven’t figured out how he can arch his back, kick his feet and go limp as a noodle so you can’t hold him all at once, and scream at the top of his lungs on top of it.  Ugh.  Abbie didn’t do that very often at all, but this little guy does.  He can be so sweet and charming, but he can also be a little hellion and he varies between the two extremes constantly all day.  We were hiking in Sedona this past weekend and he wanted to walk in the worst way and was not happy that we were carrying him. 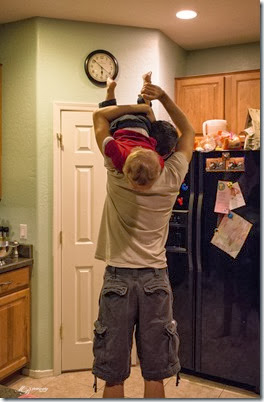 He’s all boy and loves to rough house and be chased.  And he is constantly dirty.  Constantly.  I could wipe his face 300 times a day and it’s still dirty most of the time.  He loves to play in the dirt and he typically has a snotty nose, and it’s just not a good combination.  He loves pushing toys around outside and riding the tricycle and his favorite is throwing rocks into the pool.  Yay.  He still loves his paci and lovey and I don’t see him giving those up any time soon, although I only let him have them when he’s in his bed or on long car rides (for my sanity).  He’s been getting up before 8am every day, usually around 7:15am or so, and I miss the days when Abbie would sleep until 10am.  But now he wakes her up and then she comes in and wakes us up, so I guess those days are long gone now, until they’re teenagers anyway.  Then the roles will be reversed I’m sure. 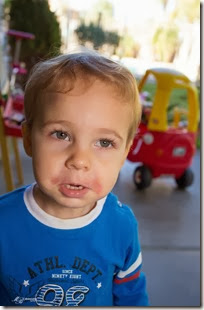 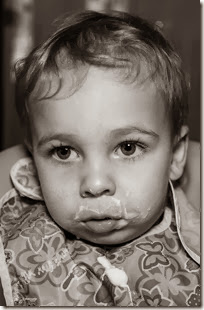 Overall, Ben is a pretty easy going kiddo and we’re so in love with him.  He’s the perfect addition to our family and we couldn’t imagine our lives without him.

The pictures of him eating the cookie is hilarious. He has that look on his face like he knows he shouldn't be doing that or something. Too cute.

Boys ARE crazy Monica! Just be glad he has a big sister to help keep him in line! LOL Wilson is constantly doing stuff, with Callie copying.

Are you doing a birthday party??