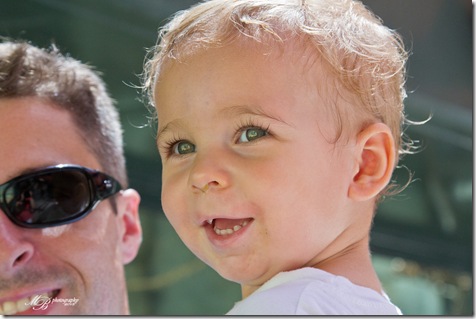 I feel like Ben is changing daily lately.  He’s definitely getting a mind of his own, which is fun, but then not so fun at times too.  His vocabulary is probably up around 200 words now.  He’s still way behind where Abbie was at this age, but he’s rapidly improving.  He’ll say things like “daddy go bye-bye”, “open/close it”, “more cereal please”, etc.  Sometimes he says things and we had no clue he could say them – like elephant.  We saw an elephant statue and a Thai restaurant today and he was pointing at it saying “eh-fant”.

Another thing new for him this month is that he says your name to get your attention.  “Daddy.  Daddy!  PAIN!!!!”  I was sitting on the couch the other day reading a magazine and he was sitting on the floor near me.  He said “Mommy!” a few times and when I looked up he clapped his hands and said “YAY!!” for himself.  He wants you to do it with him, which is ADORABLE! 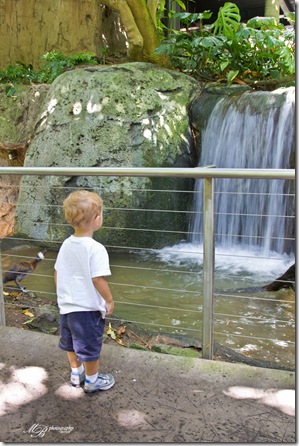 Ben can jump easily now, with both feet off the ground.  He can feed himself with a spoon fairly well and he gets mad if everyone else at the table has eating utensils and he doesn’t and he’ll say “poon peas”.  He’s learning how to drink from a cup and he will ask for water, milk or sometimes juice.  He knows when he poops and will go bring you a diaper so you can change him.  (Maybe I should potty train him soon?)  When we’re leaving the house, he almost always goes and finds my sandals for me and brings them to me without me asking him to.  He starting to boss the dogs around, which is funny and he’s starting to fight back when Abbie starts bugging him.

He’s VERY attached to his lovey and paci and while he was sick this month, I let him have them downstairs since he was sleeping on the couch where I could keep an eye on him.  So then he wanted to have the things with him ALL the time, and it was a bit rough breaking him of that.  Now he knows that paci and lovey stay in his bed so he’ll go throw them in there before he leaves his room and say bye to both of them.  I don’t really want him to get older. 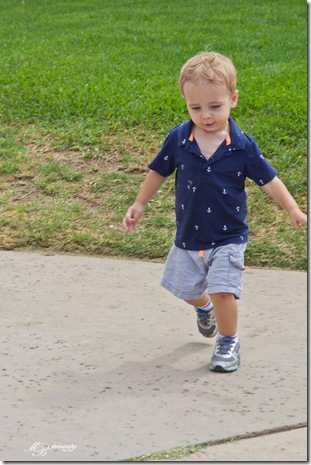 I have Ben in swimming lessons right now.  He goes twice a week for 30 mins each time for 4 weeks.  This week is his last week and he still SCREAMS during the lessons the whole time.  I think part of it is that he’s cold.  Little dude doesn’t have much body fat on him since he’s built just like his daddy.  And although he’s crying the whole time, he is learning.  He will reach under the water by himself now to get the rings on the bottom.  He can kick his feet, which he didn’t do when he started.  And if she drops him in the water by the edge of the pool, he’ll bob up and knows to turn around and grab on to the wall and then monkey himself over to the stairs to get out by himself.  He didn’t do any of that when we started.  The other day I was watching him and he monkey over to the stairs by himself and I smiled at him.  He was crying, but he still clapped for himself when he saw me smile at him.  It was so cute!  And he’ll cry but he’ll still reach for Ms Kasie (the teacher) and then give her high five’s and fist bumps, even through his tears. 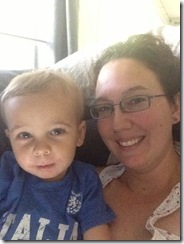 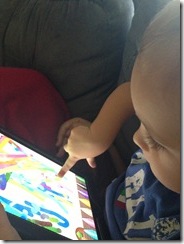 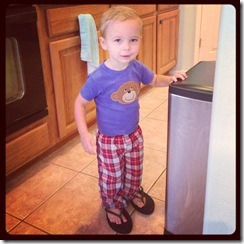 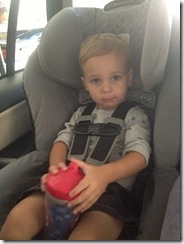 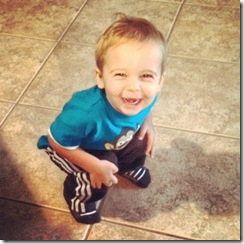 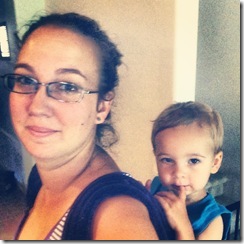 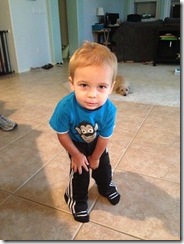 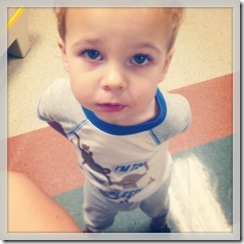 I just can’t get enough of this little guy sometimes!  <3<3

Such a cute little man!