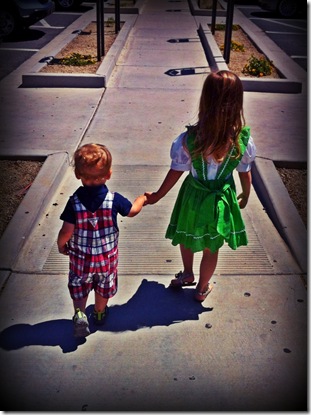 We’re slowly getting settled into a routine here.  Mark went back to work on Monday and is now going through the IPUG (instructor pilot upgrade) at Luke, Abbie’s going to preschool Tuesdays and Thursdays from 8am-1pm and I’m doing a little more work from home now that things have settled down a bit.

We had thought we might have turned a corner with Abbie and her “difficult-ness”, but I’m not sure she’ll ever be “easy”.  That kid throws me for a loop numerous times a day.  She can be so sweet and so good, but then there’s the other 70% of the time.  She is bugging Ben CONSTANTLY.  It doesn’t matter what that poor boy is doing, Abbie is bugging him.  He’s fine when she’s at school and he’ll play with the hundreds of toys we have and go outside and explore and push his push toys around and do his own thing.  However, Abbie never has been, and I’m not sure if she ever will be, like that.  If Ben has a toy, Abbie wants it and will go take it from him.  I must tell her 58 times a day to give him his toy back, and she never just does it, it’s always a fight with me threatening her before she’ll give it back.  When she’s not taking toys from him, she’s literally dragging him all over the place.  She grabs his hand and just pulls him along to get him to where she wants him, and he screams the whole time while trying to stay on his feet.  And now he’s doing the preemptive screams when she even gets near him because he knows she’s going to do something he doesn’t like.  It gets SO old.  I don’t know what I’m doing wrong.

Today we were outside and Abbie came up to me and said, “You need to get me a drink right now.”  I told her that I wasn’t going to do anything for her when she talked to me like that.  So then she said, “I told you to get me a drink and you need to get it now.”  I ignored her.  Then she started getting in my face and poking me while demanding that I get her a drink.  I grabbed her arm to get her to stop, she pulled back, I let go, and she fell on her butt.  She didn’t get hurt, but she got MAD.  And then it just got worse from there until I took her upstairs to her room and told her to stay there until I came and got her.  She screamed and threw her fit for a good 10 mins and when she was quiet I went back up and we had a discussion about why she was up there and she apologized and then asked nicely for a drink, which I got for her, and that was the end of it.  Well that round anyway.

That is one of the many examples I could give you of her behavior this week.  I don’t know why she does things like this.  She knows we’re not going to do anything for her when she acts like that, and yet she still does.  I will ask her politely to do anything 3 times and then after that I will say you are going to do this right now or __fill in the consequence here__, so I know she’s just skipping the first 3 steps and going straight to the fourth, but holy cow.  It’s EXHAUSTING.  I feel like I spend a good 95% of my waking hours arguing with a 3 year old, or disciplining her, or refereeing between the kids – aka protecting Ben.  She’s great when she’s getting attention 100% of the time, but I just don’t have the time or energy to constantly entertain her, even though that’s exactly what she wants.  She’ll ask to paint, so I will drag out all of her paints, she’ll paint for 2 mins and then say she’s done with it and then I clean it all up.  I would say on average, my set up and clean up time is at LEAST twice as long as whatever it is I’m setting up or cleaning up holds her attention.  Is this normal?

I feel a bit guilty because I read blogs about how parents are outraged that schools aren’t offering half day kindergarten anymore since they want their kids at home with them.  I think I could sign her up for 10 hour a day “kindergarten” 6 days a week and be perfectly fine with it.  She is much better for other people than she is for us, I think.  Kids usually are.  She does better in a group setting and loves being around her peers also.  I don’t let her get away with misbehaving and because of that, I am spending a good 75% of her waking hours disciplining her.  I just don’t know what I’m doing wrong at this point, but it’s obviously something.  Next year she’ll go to preschool 5 days a week for 3 hours a day and I’m hoping that’ll help her.  She’s also in a stage right now where she thinks she doesn’t need to nap and getting her to nap is a huge fight, but if she doesn’t nap then she’s an absolute bear to deal with by 4-5pm.  It’s great fun.

All you parents out there – anyone have any tips?  Suggestions?  Recommendations for good boarding schools?  Ha, just kidding.  Kind of.

Seriously Monica, I feel your pain. Except that Wilson is not anywhere near as verbal.

I wish I had some good advice to give to you instead of just telling you, I'm in the same boat. CRY.

No advice!! I'm not qualified. But THANK YOU for taking the time, effort, patience, hard work, etc. to care enough to discipline your child. There is a family we know, and like, but they are too lazy to do any of that. Their son does whatever he pleases all the time and he is a terror for everyone!!! I'm sure all the work you're putting in now will pay off! :)

I think this really is normal Monica. My kids fight almost nonstop. Actually, they've been up this morning for 2 hours and not fought yet and that must be some sort of record. My kids pick on each other equally though. Emily can hold her own now and also knows if she screams, brother gets in trouble even if he didn't do anything. He went through a really hard phase the first 6 months after our move. School was making him exhausted and he wasn't eating good at school and would come home tired and hungry. He finally has found his grove and is being a nicer kid and better brother. I'm not sure I have much good advice but with Brian at least, he really responds to praise. So, although it is unnatural for me, I constantly praise him for when he is being nice to her and tell him he's such a good big brother, even if sometimes it feels fake and what I really want to say is that he's a little shit and that I shouldn't have to get all gaga over him being nice, that being nice should be automatic. I also am extremely consistent in consequences for bad behavior. That helps with my kids, Emily especially. I've found that when things feel really bad, it's just a phase and in six months, the problem will be better and there will be some new problem. Oh and in the the not too distant future Ben is going to start fighting back and she'll start thinking twice about messing with him. Also, sounds like she does need to get out of the house and see other people and kids and you need it too!

I only have one child, but have you thought about part-time daycare? I know you are a stay at home mom, but perhaps she needs more stimulation and it would give you a rest? Thanks for blogging. :)