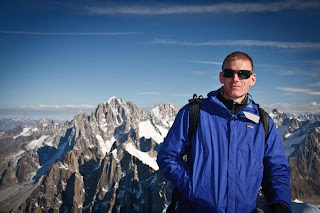 Luc's memorial service is tomorrow.  I told Abbie I would be picking her up from school early because I was going to a memorial for a friend who died.  She immediately asked who died.  Our conversation went something like this:

Me:  Do you remember big, tall Luc?  (Side note:  Abbie has always called Luc "Big tall Luc" because she has another good friend her age, Luke.  So to distinguish between the two, that's what she called Luc.)
Abbie:  Yes, did he die?
Me:  Yes, he did.
Abbie:  How did he die?
Me:  He had an accident with his plane.
Abbie:  Where is his plane now?
Me:  Probably still in the water.
Abbie:  His plane is in the water?  Who got him out of the water?
Me:  Yes, his plane is probably still in the water.  The police got him out of the water.
Abbie:  The police aren't on the water.
Me:  Sometimes they are.
Abbie:  Why did he die when his jet went in the water?
Me:  Because he had too many injuries, I think.
Abbie:  Because he was going really fast.
Abbie:  I think Miss Cassy is very sad.
Me:  Yes, Abbie.  I think you are right.

It's still hard to believe that Luc isn't here anymore.  He was just so full of life and energy and always had a smile on his face.  He was one of those people that you just instantly felt comfortable around and he was so easy to talk to.  He made you feel like what you say really mattered and that he really cared.  I remember seeing him numerous times in the parking lot at the BX and we always found something to talk about for a few minutes.  He always gave you hugs when you saw him.

Luc taught me a lot about photography.  He showed me quite a few tricks and gave me more than a little advice on the subject.  He also gave me Lightroom 3 and a huge instructional book to go with it when he upgraded to Lightroom 4.  It's pretty much because of him that I got interested in photo editing.  Even though he had a busy life, like everyone else here at Aviano, he would always respond quickly to my emails with photography questions.  Both of the photos in this post were taken by him.  He really was an amazing photographer.  And because he was so outdoorsy, he got so many great shots of places some of us can only dream of seeing.

I remember the first time we met Luc and Cassy.  We were in Phoenix and our mutual friend, Chris B, introduced them to us since he knew we were going to be stationed at Aviano together.  They came over for dinner at our house and my mom did most of the talking, drilling them with questions, and Mark and I kind of sat back and listened.  But they were fun to be around and easy to talk to and Mark and I liked them a lot right off the bat.  We moved to Aviano within a few weeks of each other and we were disappointed when they chose a house in Maniago and we chose a house in Sarone since the two were about as opposite of base as you could get.

Luc loved kids.  Sometimes he would spend more time talking and interacting with the kids than he would the adults.  I think that says a lot about a person.  He loved asking them questions and keeping them involved, and in turn, they loved him.  Abbie absolutely loved "big tall Luc".  Every time we would see him she would talk about him for days afterwards.  We actually discovered Abbie knew a little Italian from the asilo because Luc was fluent in Italian and he started talking to her in Italian and she was able to respond.

It absolutely breaks my heart that Luc died 20 days before his daughter was due.  He would have made the most amazing dad, and just asking him about the baby and Cassy's pregnancy made him light up.  The fact that Cassy is going to have to give birth so soon after losing her husband is something I couldn't even imagine.  It makes me so sad that she is having to go through every pilot's wife's worst nightmare.

If you are the praying type, please say a few prayers for Cassy as she is going to have to attend her husband's memorial service tomorrow.  They had an undeniable bond that you don't see in most couples and they both had that special look in their eyes when they looked at each other.  They never, ever said a bad word about each other either, not even sarcastically.  I'm so glad that they had 15 years together (they were high school sweethearts), but I wish they would have had 55 more. 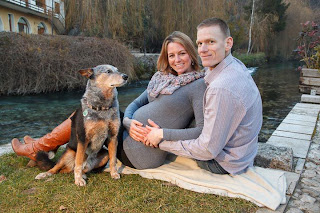 Monica, I was sorry to read about your friend's death. I know must hit really close to him for you. It sounds like the world lost a really wonderful man. His family has been in my thoughts this week.

This story absolutely breaks my heart. I am so sorry for your loss, Monica. It sounds like Luc touched many people and I know your pilot community must be crushed. And I cannot imagine what your friend Cassy is going through - having to experience the birth of their first child alone. I wouldn't be able to do it. Hopefully her daughter will be a great source of comfort during her healing process.

This is a beautiful tribute to Luc! Praying for everyone involved, especially Casey and Serene.

Be sure to write all of this in a card for their daughter to read when she is older. It sounds like her daddy was a wonderful guy. It will bring her comfort knowing more about him from others. Hugs to you again!

Wonderful words, Monica. I didn't know him near as well as you, but every time we did meet and talk I was just blown away by his grace and politeness. He was always willing to help me out when Kenny was away and seeing Cassy and Luc together at all of our baby meetings/appointments always made me smile, because you're right—he was already so involved. It still just breaks my heart.