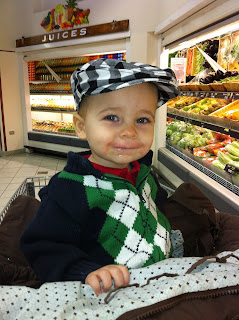 Our little man is 14 months old today!!  Hard to believe!!  This month has been interesting for us, for sure, and I am still amazed daily by this little guy! 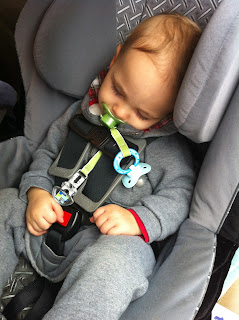 Ben still has quite a bit of baby in him, but he's rapidly emerging into a toddler, and it makes me so sad!  I just want him to stay little!  He had 2 ear infections this month, and I discovered that my sign that he has an ear infection is that he gets eye goobies.  He didn't really have a temperature, isn't super fussy, doesn't pull at his ears, but he does get eye goobies.  So now I know when he wakes up with those, to get him to the doctor, although hopefully he won't have another ear infection for a long time. 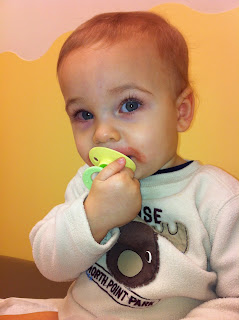 He still has that horrible paci rash, even though he hasn't had his paci for over a week.  I'm hoping once this round of it goes away, it'll stay away for good since he's not using a paci, although that's not his decision at all.  I owe Brittney a big thanks for starting that process for us.  While we were back in the States, Abbie decided to try to pick Ben up and he fell teeth first into the tile, knocking both of his front teeth out in the process.  He wasn't allowed a paci for a week while he healed so we're just going to run with what was started and ditch the paci now.  He is MUCH more attached to the paci than Abbie ever was, so I do feel a little bad for him.  And I'm going to feel really bad for me when we go on the 12 hour flight back to the States in less than a month with no paci's for him... 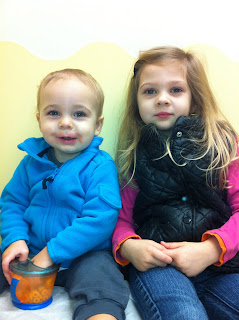 Due to him not having the paci, he's been more difficult to get to sleep lately too.  He'll cry/fuss/scream for 5-20 mins at bedtime now before he goes to sleep, but he'll sleep until at least 8:30am if not later.  He's still taking a 2-4 hour nap in the afternoon and he's still drinking 20+ ounces of whole milk a day.  He eats like a champ and typically eats more than Abbie does at any given meal, but he lets you know if he doesn't like something... or if he does.  I made the mistake of giving him a teeny tiny little piece of a Girl Scout Thin Mint, and now he goes nuts every single time he sees them. 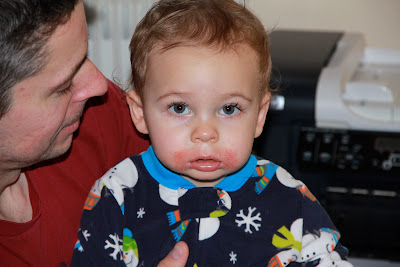 Ben gets SO excited when he sees Mark for the first time in the evenings.  It is adorable.  I remember Abbie getting excited, but not quite this much and not this young either.  Ben about turns inside out.  He screams and claps and kicks his feet and does everything he can to get Mark's attention (all while Abbie is doing her best to get his attention too) and if Mark doesn't go over and say hi, Ben crawls to him and pulls up on Mark's pants and stands there until Mark picks him up.  He loves it when Mark crawls around with him on the floor and he LOVES to crawl under Mark.  I have a few videos of it.  It's really cute. 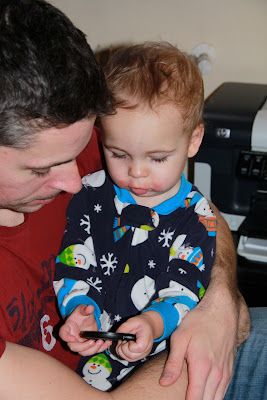 This little guy is all boy.  He seems interested in different things than Abbie was at this age.  He gets a kick out of throwing things.  He is absolutely fearless of stairs.  He likes to turn things upside down, especially his bigger toys like the push ones or this musical table things.  He loves picking things up and putting them away and he loves "chasing" Abbie while pushing his little push toy. 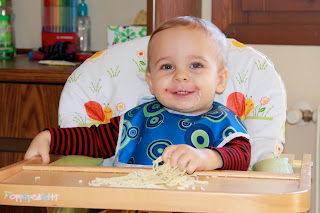 Ben probably could walk by himself if he tried to, but he's not quite brave enough yet.  He's walked across the living room a few times, but it's not a regular thing.  He can bend down and pick something up if he's hanging on to the wall or his push toy or something.  He's really thinking about walking though.  You can see him staring at something a few feet away and he inches towards it while hanging on to something.  Then he'll take a few tentative steps towards it before he purposefully drops to the ground to crawl the rest of the way.  However, if I'm in front of him with my arms out, he will walk all the way across the living room and kitchen without falling.  That makes him so excited when he does that.  So he could do it, he's just choosing not to right now. 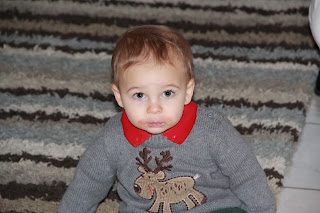 He's such an easy going little guy.  I am so thankful I have at least one easy going child, since Abbie is about anything but.  Ben is very quick with his smiles, and when he wants your attention, he crawls over to you and pulls up on you and waits for you to look at him.  He doesn't get mad when you redirect him.  He's an expert at noticing if one of our lower cabinet child proof latches isn't hooked.  He immediately bee-lines for it and then opens the cabinet, all while watching you.  But you can go close the cabinet and he doesn't get mad at all.  It's super easy to get him belly laughing, which has got to be one of the best sounds in the world. 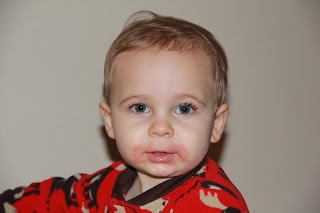 Ben is getting much better at doing the signs he knows.  He still doesn't say many words, although this month he added "Uh-oh" and "thank you" to his vocabulary, and he's also starting to sign thank you.  Abbie was much further advanced in her language skills by this point, but I'm not too worried about Ben catching up to her.  He's much more of the "slow and steady" type. 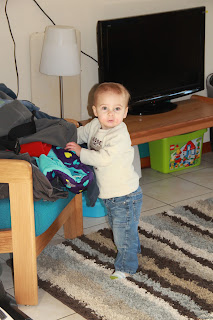 He's still in size 4 diapers and 12-18 month clothes.  He still hates having his diaper changed and loves to turn the TV off by the buttons on the side.  (Thank you, Abbie, for teaching him that...)  He loves playing with Abbie and doesn't throw quite as big of a fit when you put him in to his car seat now.  He's getting more interested in the dogs and likes to go over and beat on them every once in a while.  (His petting is more like smacking at this point, but they don't mind.)  He's fascinated with remotes and phones and the buttons on the stove and microwave.  He really is just a joy to be around. 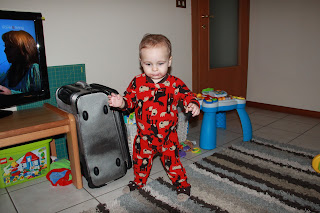 I am glad you explained the redness around his mouth. I had no idea pacifier rash could happen (though it makes sense). Neither of the girls took to a paci. I love that picture of him on the carpet in the moose sweater. :D