It’s a weird thing, watching your entire house be packed up before your eyes.  I’d be lying if I said it wasn’t at least a little bit hard.  It’s very exciting, for sure, but it’s also a little scary saying goodbye to all your things. 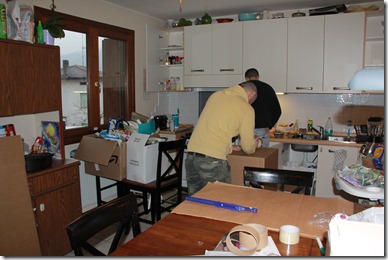 So we’ve traveled a lot since being in Europe.  We’ve been to Switzerland, Austria, Germany, Czech Republic, Slovenia, Slovakia, The Netherlands, England, Ireland, Spain, Croatia, Greece, Turkey and of course all over Italy.  Our main souvenirs at most of these places have been magnets for our fridge, and we have quite the collection of them now.  We also got t-shirts from some of the places, especially for the kids.  Some day I will cut them all up and make a quilt from all of them.` 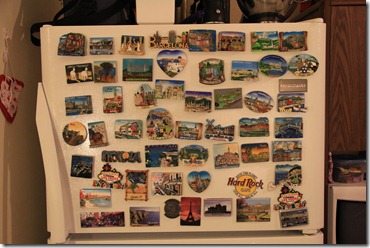 Some of the places we went, we got vases, in hopes to some day have a place to display them.  The ones on the left are from our squadron and Burano.  The one on the right is from Turkey. 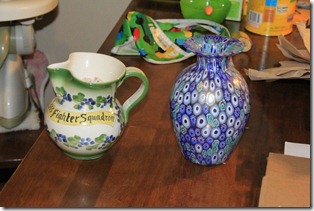 The vase below is from Ravello, Italy on the Amalfi Coast and the platter is something from Nove, Italy that I won here.  (I took pictures of all of this stuff before it was packed to prove that it was in one piece when it left here.  Hopefully it’ll all arrive in one piece in AZ.) 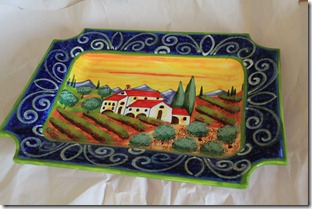 Our one huge souvenir from our time in Italy is this table that we got at the bazaar this past fall.  It is an antique table, supposedly made from floorboards in a monastery in France.  It is a HEAVY table, and made without the use of nails or screws, so it couldn’t be taken apart to be shipped.  The table has a ton of character, which we love, and is obviously not something we can replace once we get back to the States, since I don’t think there are a whole lot of these floating around the US.  I am very nervous about how they packed it in the crate and I argued with them about putting as much stuff as they did on top of it, but Mark, the packers and the TMO lady all assured me that it would be fun.  Hopefully they’re right because I’m going to be majorly P.O.’d if we get there to find it’s broken. 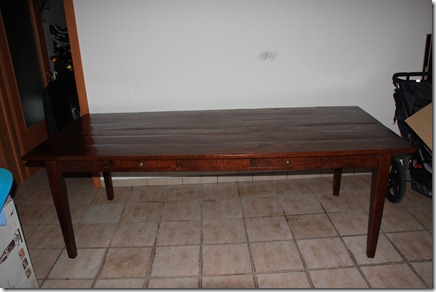 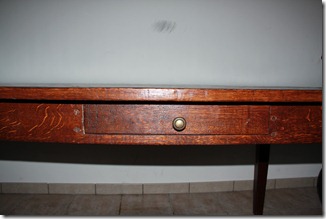 I also didn’t get a chance to see how they packed up my demijohn’s either, so I hope that these all make it one piece too. 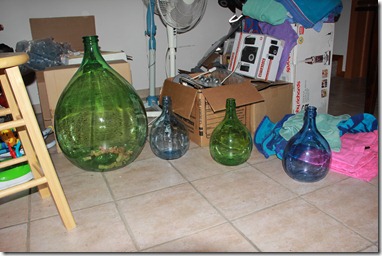 Giuseppe Pino is an artist that sells his paintings in the BX area a few times a year and every time we’ve seen them we admire them.  I love his work, so at the last bazaar, Mark and I bought one, and we love it.  Again, this is not easily replaceable either, unless I can get him to paint us another one and ship it to the US.  I would love to have another one of his paintings, but they’re pretty darn expensive. 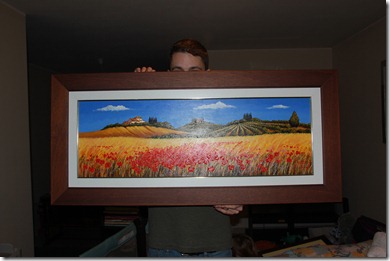 We also got these paintings of Venice and Rovinj, Croatia and had them framed.  They’re original artwork, and the framing/matting cost us a pretty penny, so hopefully the arrive undamaged also. 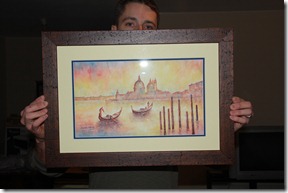 The painting on the left is painted on an antique roof shingle.  We also got this at the bazaar, although I am fairly certain that we picked out a different one and somehow the one we picked out got switched with this one, so when we went back to pick it up, it was already boxed up with our name on it.  I thought we’d picked one out with a painting of Venice on it, not giant mushrooms….  A little disappointed about that, but by the time we opened it and figured out that it was the wrong one, we couldn’t do anything about it.  Boo.  And the big wooden bowl is an antique bread bowl – again, from the bazaar. 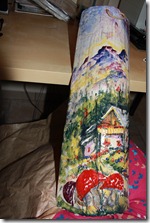 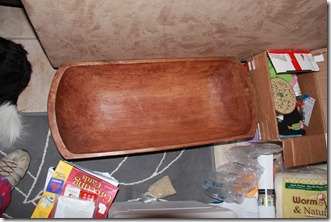 Overall, we had 10 crates full of the things we’ve shipped so far.  They estimated it to be between 10k-11k lbs.  We are allowed another 1250 lbs to go in our unaccompanied baggage shipment at the end of February, so hopefully all the rest of our things fit into that.  We’ll see!!  I’ll be happy to see our stuff on the other side, for sure. 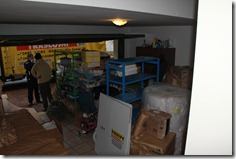 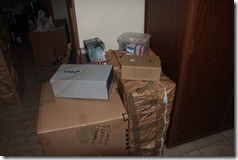 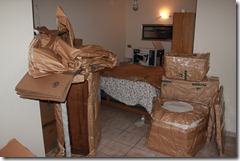 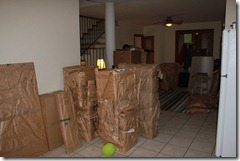 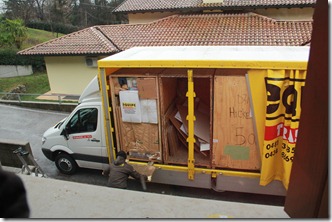 I have to say, I like this house much better without all of our stuff in it.  We have so much more space and it seems brighter and more open.  We kept the things we use the most, so it still feels like home, just without all the clutter, which I love.  We might have to do this minimalist living once we get back to the States too, although by then I’m sure I’ll be happy to get all my junk back and to not be sleeping on an air mattress anymore.

Ahhhh, you have collected some really neat stuff! The table is awesome, and I love the painting of the fields. Where are you moving when you back to the US?

Good luck with the move! :)

The items you picked up in Europe are beautiful. I can understand why you are nervous. I really love all your vases.