This year has started with a bang.  It seems like it’s one thing after another for us right now and it’s a tad bit exhausting.  I’ve been busy, but I like it that way.  The first Saturday in January, I went to Venice with 4 of my good friends from here and we had a great time shopping and eating at the Hard Rock Café.  It was my first time going to Venice with the girls, and I wish I had done it more often while we lived here.  It was a lot of fun spending time with them, and I got a cute purse from Venice also.  Over the next 8 days, I had a meeting and a luncheon to attend, but couldn’t because Ben had pink eye so I couldn’t put him in the childcare for those events.  Good thing I took him to the doctor since he had his first ear infection also, but after the first dose of antibiotics, his ears and eyes both cleared right up, thank God.  I also helped host 2 baby showers for good friends here, and that was a lot of fun.  I managed to finish their quilts for them and I’ll post about those soon.

Last weekend we were supposed to get the house ready for the movers to arrive on Tuesday, but Mark was sick with pink eye, a cough, a cold and a fever and I wasn’t feeling the best due to this stomach bug I’ve had off and on since after Christmas.  I felt queasy, had diarrhea and had no appetite what so ever.  The upside to it is that I’ve lost 6 lbs due to not feeling the best, but I think a lot of it has to do with the stress of the move and the anticipation of what’s to come.

Last weekend I also managed to drop my laptop off of my lap while I was in bed, and it landed on our hardwood floor and ruined the hard drive.  I sent it to a computer guy here and he couldn’t get anything off of the hard drive, so any of the photos you’ve seen on the blog since August are not gone.  I’ve lost my copies of all of them and the ones on here aren’t print quality.  I could have cried.  I’d spent hours working on editing pictures of a friend that I took for her in December, and I was almost done with them.  Lost all of those also.  (I still have the originals, just not the edited ones.)  I had just emptied my phone pictures and videos on to my computer and I lost all of those too.  I am heartbroken by it and I really hope that someone can figure out how to get the pictures off of it.  I lost all of my saved recipes on it, all of my favorite saved websites, everything.  I can’t access anything that I had on that computer anymore.  It completely sucks and I feel bad that I ruined the computer.  Not a good way to end one year/ start another, that’s for sure.

So the movers got here today and we had very little prepared for them.  We had to get everything separated that we want to keep with us here for the next 6 weeks while the majority of our stuff is shipped to AZ.  We managed to get the majority of it done today while the movers worked, but we still have some to do tomorrow and the movers will be here all day tomorrow also.  They think they’ll be able to get the rest of the house done tomorrow but I’m not holding my breath for that one, unless they stay super late, which I really hope they don’t.  It’s hard enough with the kids when they stay until 6pm, but any later than that is infringing on dinner time and the start of our night time routine.  We’ll see how it goes, I guess, but I wouldn’t be too surprised if they came back on Thursday also.

I’m already worried about our stuff being shipped.  I have my new stainless steel pots and pans being shipped and I told the guy packing them that they couldn’t be touching each other at all or they’ll scratch each other up by rubbing metal on metal.  He threw a bunch of them in a box, all piled on top of each other, but luckily I saw it and told him to redo it.  I wanted him to wrap them all individually but he just shoved packing stuff in between them, and that was only 3 of the 7 of them.  So hopefully the other 4 aren’t packed on top of each other.  We have a bunch of vases and plates and other very breakable things that we’ve gotten during our travels and I’m really hoping that those will arrive in one piece.  I’ll be pretty upset if they don’t.  And I’m worried about our antique table that we bought at the bazaar too.  I just really hope it gets there okay.  I would have preferred that they packed it differently than they did, but everyone assured me that it was okay.  I hope they’re right.

The next few weeks are going to be pretty busy.  I’m going to Slovenia with my friend Brittney for the weekend this weekend.  I have a Bunco game night this week, dogs vet appointments and a squadron coffee next week  and then we leave to go house-hunting in AZ for a few days.  February will be fairly laid back, but it’s the calm before the storm for sure.

This is our 6th military move in our 7 years in the military, so it isn’t our first rodeo, thank God.  I feel a little more laid back about this one (obviously, since we didn’t really do ANYTHING to get ready for it), but I’ll be glad when it’s behind us for sure.

I’ll post more once our stuff is gone and I have more time on my hands, which might not be until February!! 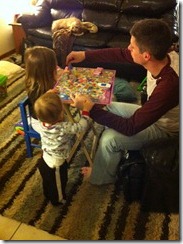 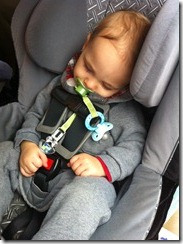