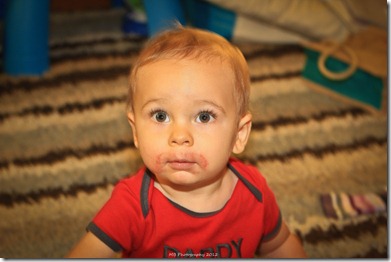 One more month and Ben is a year old!!  And he is changing by leaps and bounds this month!!  He’s still pretty darn laid back, although he’s getting a bit more fussy since now he wants to hold on to your fingers to stand up 95% of his time awake.  As Abbie did, in one week, he went from just rolling to being able to sit up from laying down by himself, pulling himself up and moving his feet when he holds on to your fingers, pulling himself up to his knees on his own, and getting in to the crawling position and moving forward a little bit.  And he spins on his butt all the time now – just twirls in circles in the middle of the floor. 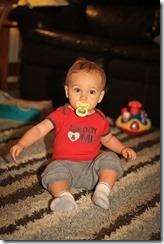 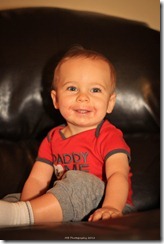 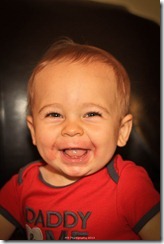 This little guy eats more than Abbie does.  He can pack food in like none other!  For example, last night he ate one slice of cheese, 2 slices of thin sliced ham, a handful or two of yogurt melts, 3 cracker sandwiches, a jar of baby food, about 15 spoonfuls of fried rice and one of his baby mum-mums.  And he would have eaten more but I cut him off.  He is a little oinker!!  I pretty much feed him little bites of whatever I’m eating, and he LOVES meat.  He hated baby food meat (who can blame him) but he loves “real” meat. 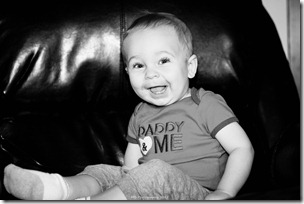 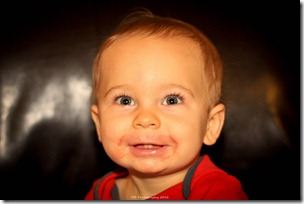 I moved him up to size 4 diapers at night since he was leaking through size 3 ones.  As soon as I run out of the size 3 ones, he’ll be in only size 4.  He’s still in 9-12 month clothes, although I’ll probably be switching that over to 12-18 month stuff soon.  I’m also going to have to move him out of the infant car seat soon because he’s getting really long. 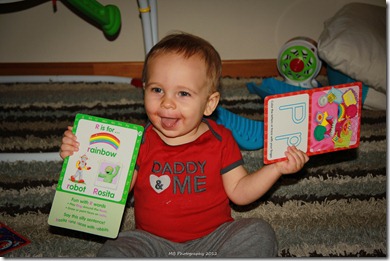 Ben LOVES Abbie.  When she actually plays with him instead of just taking toys from him constantly, they have SO much fun together and he laughs so much at her.  It’s really neat to see their interactions together.  She wants to “spot” him by herself when he’s practicing his standing, or she wants him to hold on to her hand when he practices walking.  I’m sure soon enough he’ll be chasing her all over the place and she’s going to miss the days she could just move away from him.  Although right now he’s pretty darn good at following her around and he loves to get into whatever she’s playing with.  (So they don’t ALWAYS get along….) 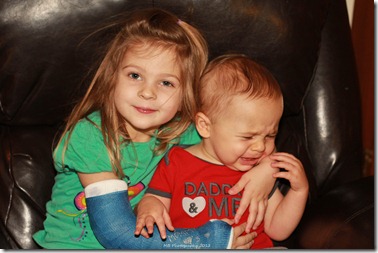 He’s still drinking around 24 ounces of formula a day, and he can feed himself a bottle now when he’s laying down, which is nice.  He kind of uses sippy cups although he’s still figuring that out too.  He’s usually in bed by 8:30pm and up around 8am.  He seems to be almost to the point where he could do one nap in the afternoon, but if we put him down for a nap in the morning, he’ll sleep for about an hour and not have any trouble falling asleep.  And he sleeps for 2-3 hours for his afternoon nap too.  He also has 2 of his molars on the bottom!!  He has his 2 middle teeth on the bottom and then his 2 molars, but nothing in between the 2.  He’s had a rash around his mouth for MONTHS on and off now, and I have no clue what’s causing it.  It comes and goes about once a month, but gets really dry and flaky at the worst of it and then goes away.  He had it last week when I took these pictures, and now it’s completely gone.  But it’s been going on for quite a while.  I’m going to ask them about it at his 12 month appointment, although I already talked to them about it at his 9 month appointment and they just said to keep putting stuff on it. 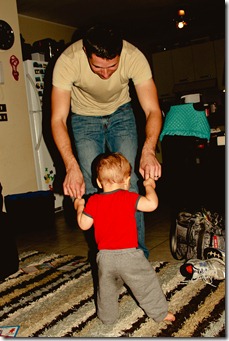 Everyone that watches Ben for us comments on what a good little boy he is.  He really is just a joy to be around and such a happy little guy most of the time.  He is just SO different than Abbie was at this age!  You would tell Abbie no at this age (well, and still, I guess), and she would look you in the eye and do it again.  If you tell Ben no, he actually stops doing whatever he’s doing.  He doesn’t really have any separation anxiety, but he doesn’t like it when you walk away from him so he cries sometimes.  He gets SO excited when he sees Mark or me come in the room – especially Mark when he gets home from work. 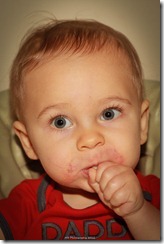 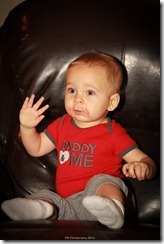 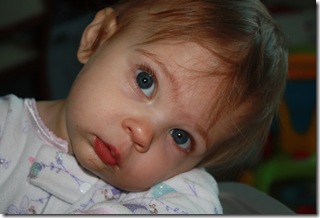 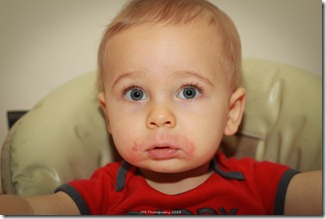