Our poor Abbie can’t catch a break lately!  I feel like the Pordenone Hospital is our second home.  It seems like within a week of us getting back from a trip, we are in the hospital with our little pippers.
Friday, November 2, Abbie was outside riding her bike (with training wheels) and managed to tip it over causing her to fall off the bike.  I wasn’t outside to witness it, but I was told that she didn’t fall very hard and she also had a thick winter coat on.  She did some of her normal screaming when she gets hurt, but when she was still whining/crying about it 20 mins later, I knew something was up and I called the base clinic to see if I could get her seen, but of course, that wasn’t possible.  So then I called the nurse advice line to see if there was some way I could help her at home, and they basically said to have her seen by a doctor immediately.  So that left us with the only option of heading to Pordenone.
My mom and I took Abbie to the hospital, and Mark met us there, while my dad stayed with Ben.  Abbie was doing very well considering her last experience there.  She got upset when the doctors wanted to get near her and she didn’t want to sit on any of the tables, but other than that, she did really well.  We waited about an hour or so to be seen by the peds doctor, who immediately sent us down for x-rays.  Mark was able to go back with Abbie while her arm was x-rayed, and she screamed bloody murder during that part for a minute because they were trying to move her arm, but then she was okay.  The x-rays showed that she had what they called a very minor fracture on the humerous bone of her right arm, above her elbow, so they put a cast on it.  It took 2 doctors and 2 nurses to put this cast on her, while she sat in my lap.  She was really nervous at first, but then she calmed down when she realized that it wasn’t going to hurt.  It took about 2.5 – 3 hours from the time we got to the hospital until the time we left. 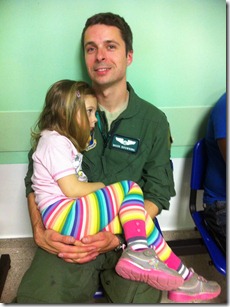 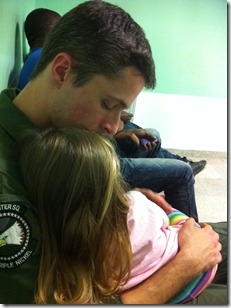 Abbie was exhausted when we got home, and even though it was 6pm, I let her go to sleep for a bit before she ate dinner.  I’m fairly certain she would have gone to bed at 6pm and slept until the morning, but I didn’t want her waking up super early, so I got her up and made her eat something.  The first few nights she woke up 4-5 times saying her arm hurt or it itched, so I was up with her a lot.  But after 3-4 days of keeping her on pain meds, her arm wasn’t hurting as much, although it was itching quite a bit. 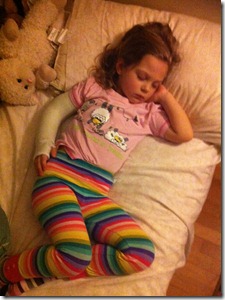 I had called base on Monday morning to see if we could get the follow up appointment to have the cast removed and they told me that normally the base wants to see people as soon as possible after they get casts in Pordenone.  I was thinking that we would just get the cast taken off on base, 2 weeks later, since the Italian doctors said she needed to keep it on for 2 weeks.
We ended up going to see the orthopedic doctor on base on Thursday morning.  They took more x-rays of her elbow/arm and the doctor told us that her bones were now 1mm differentiated now, and that if we had brought her in there originally, he would have put pins in to set her arm, instead of just a cast.  Since she had had her original cast on for almost a week though, if he had fixed it then, he would have had to re-break her arm in order to “fix” it, so he didn’t want to do that.  He said that her bones not lining up perfectly now wouldn’t cause her any issues later on, so he left it like that.  They put on a different, much lighter and thinner, cast though.  And the doctor and the tech who put the cast on were SO good with Abbie.  She actually enjoyed being there and talked about how nice the doctors were and how they didn’t hurt her at all for 2 days after the appointment.  I’m annoyed that they don’t make exceptions for little ones and get them seen by an orthopedic doctor immediately, instead of sending them to Pordenone and then redoing everything.  The doctor said that the Italian doctors tend to not be as thorough as US doctors are since they don’t have to worry about lawsuits, and also they don’t have as advanced equipment in Pordenone as they do on base, so it’s possible that they couldn’t see the break as well as he could on the x-rays taken on base. Oh, and this cast has to stay on for 4-5 weeks, making the total time 5-6 weeks, not 2… The situation is frustrating.  I am SO thankful we’ll be back in the States in a few months. 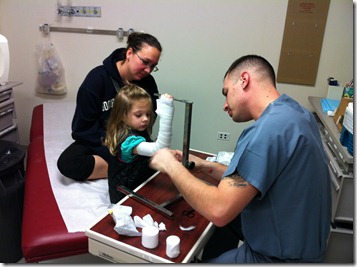 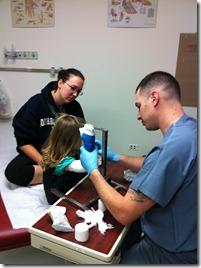 Abbie is doing great now.  She can’t do ballet for 4-5 weeks, but other than that, she’s using her arm fine and since this cast is much lighter, she’s more comfortable with it.  She told Mark that the other cast was too tight and that this one is much better.  We have a follow up appointment on base on Wednesday where they’re going to take more x-rays, so we’ll see what they say then.  I REALLY hope that was our last encounter with the Italian healthcare system!
Oh, and Ben was there for the appointment too.  He was a good boy, as usual! 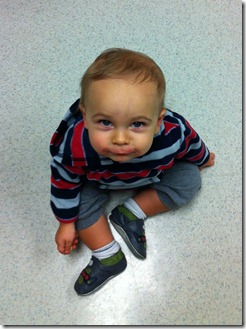