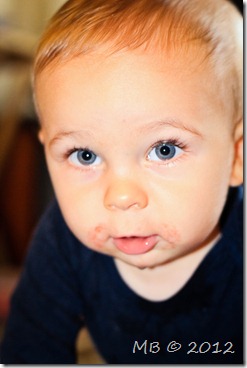 Two more months and our sweet little boy will be a year old!!  Where the heck has the time gone?  I know I say this every single month, but truly this little guy is about the easiest baby on earth.  He’s almost always happy and if he’s not, his fussiness is usually pretty easily fixed. 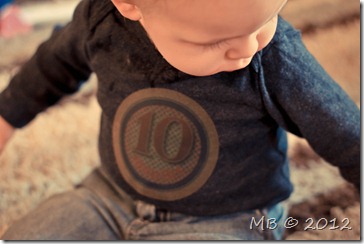 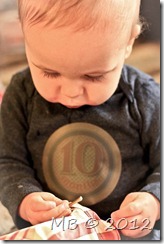 Ben eats like a champ.  This boy can pack it in.  He will basically keep eating whatever food you put in front of him, and when he gets full, he starts throwing it on the floor.  Nice.  But I give him little tiny bits of whatever we’re eating and he loves it.  I still feed him 3 bottles a day, ranging from 4-8 ounces, and he averages about 20oz of formula a day.  Plus I feed him at least one container of baby food per meal, usually 2 at dinner time, along with yogurt, cheese, lunch meat, bananas, ripe peaches, avocados, peas, (he LOVES peas), yogurt melts and baby “cheetos”.  He’s a really good eater and he’s 100% happy when he’s eating. 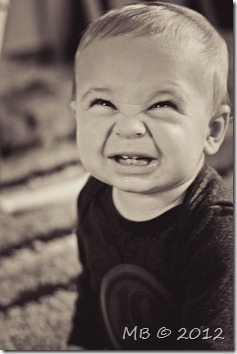 Ben has 6 teeth now – 2 on bottom and 4 on top.  He’s had a rash on his face for a couple months now that comes and goes, and we originally thought it was from his paci since it’s only in the paci area, but now I’m not so sure.  I don’t know why it comes and goes, and we’ve been putting Aquaphor on it to help protect his skin but it doesn’t seem to do much good.  It doesn’t seem to bother him or hurt him, but it looks terrible and I feel bad for him.  Hopefully we can get it to clear up soon. 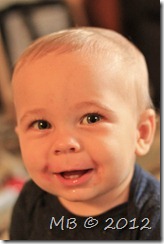 This boy sleeps pretty darn well too.  He’ll still take an hour morning nap and a 2-3 hour afternoon nap, and he goes to bed around 8:30pm and gets up around 7:30am usually.  He’s still in size 3 diapers, although I’m going to bump him up to size 4 at nights because he’s been soaking through the size 3’s over night.  All of his 9-12 month clothes still fit, but I’m sure he’ll be on to 12-18 month soon. 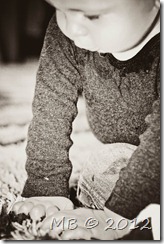 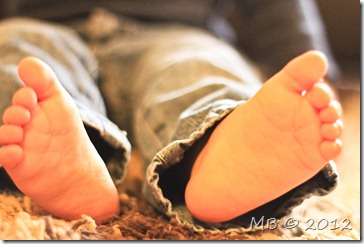 Our little guy still doesn’t crawl, but he rolls like a champ and also kinda scoots on his butt in a sitting position sometimes.  He’ll pull himself up if you offer him your hands to hang on to, and he’s still figuring out how to move his feet forward to walk.  He will take a few sporadic steps sometimes, but mostly he likes to stand there and bounce or sway.  I’m perfectly find with him not being mobile yet.  He’s said mama twice when I prompted him and dada a few times, when Mark has been there, but we’re not too sure he’s putting those 2 together yet.  He loves to play peekaboo and every time you say “Where’s Ben?” he puts his arms over his eyes.  And you can say “Yay Ben!” and he’ll clap for himself.  He likes to clap for himself. 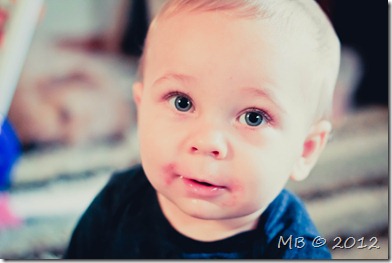 I can’t wait to see what changes we’ll see in the next month, but I wouldn’t mind if he stayed this way forever either.  I love my little man!

Those cheeks and those little baby feet are to die for!

He's such a cutie and a very happy little boy! :)