Here’s another reason I’m more than ready to move back to the States. 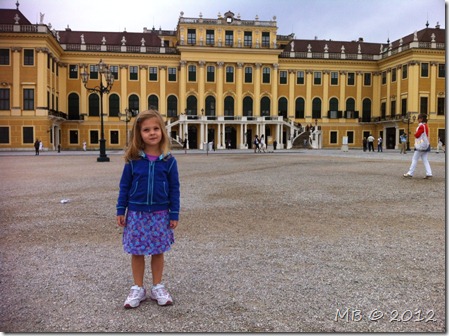 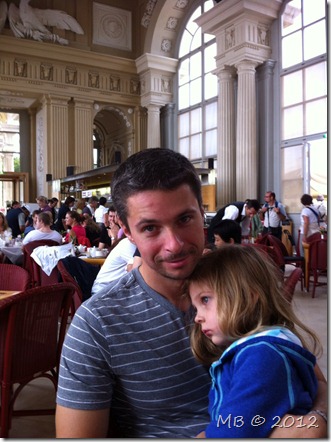 We gave her Ibuprofen and Tylenol to make her more comfortable, but she was complaining of her neck hurting, which was sending off more than one alarm in my head.  I told Mark that I knew that fever and stiff necks were two of the main signs of meningitis and I effectively freaked him out too, to the point where we were walking around the palace searching for other symptoms of it on our iPhones.

She kind of acted like she felt better for a bit, and the meds would bring her fever down to under 100, but then it would be back up in the morning.  I was still worried on Monday and didn’t sleep well the night before from constantly checking the monitor to see what she was doing.  I got her in to the pediatrician on Monday morning, and she said that meningitis wouldn’t even be on her radar for Abbie at that point, which was good.  Abbie stayed about the same through Monday night, but she definitely didn’t seem to be getting any better.

Today (Tuesday) she seemed to be getting worse.  She was holding her head at a slight angle to the left and she’d barely turn her head in any direction at all.  She’d just turn her whole body instead.  She wasn’t eating much, her voice sounded a little funny (it reminded me of when I used to get strep throat all the time and my tonsils would swell up and make me sound funny), she was SUPER cranky and lethargic.  I called base more than once and talked to more than one person and finally I got ahold of a nurse who suggested I take her to the Pordenone ER (about 35-40 mins from our house.)  I REALLY didn’t want to, especially by myself with both kids since Mark was at work, but I was also tired of worrying about her, so we went.  And the nurse freaked me out by saying it could be an abscess or something equally bad.

So I have both kids in the double Bob and I go in to the ER triage area and start looking for someone to help me.  The hospitals over here are SO different than those in the States.  There is nothing warm, nor inviting about them at all.  Nothing.  There is no welcome desk or any obvious area to check in so I’m wandering around a few rooms trying to figure out where to go, or to see if I can read any of the signs, most of which were in Italian.  I finally loop back around and see a few people standing in line, so I go wait in line for 5 mins and notice a sign that says something about all military dependents from Aviano need to check in with the command post and it gave a number.  So I called the number and the guy had no clue what to do.  At about the same time, I finally have the “half attention” of the idiot Italian sitting at this computer desk and ask him in Italian if he speaks English.  He shakes his head no, motions for me to leave and goes back to his computer.  Seriously?  What the eff?  What if my kid really did need to be seen right away?  The jackass wouldn’t even look at me.  Luckily I still had the American on base on the line and he said that he had no clue what to do, but he’d call his boss and get back to me.  Great.  So I stand in this waiting area for a few minutes and the guy calls back and says that since it’s 4:40pm, the liaison office at the hospital is still open and I need to go there to have them translate for me.  But they weren’t answering their phone and he had no clue where the office was.  Again.  Great.  I was about ready to knock someone out at this point.

We’d been to the ER shortly after we got to Italy with Abbie so I decided to head over to that building and hope to God that I could find someone to help me.  These hospitals are so different that most of the time, they don’t have lights on.  Like you walk down dark halls and in to dark waiting rooms – it’s REALLY odd.  Luckily I saw some guy following another guy in a military uniform and his wife and I asked him if he was the translator and he said yes.  Thank GOD.  Unfortunately, in the end, his shift was over and the other guy taking his place never made it up to the peds floor so we didn’t even end up using them.  The doctor spoke enough English for me to understand him.

The doctor finally saw Abbie and just felt her neck a little and looked in her mouth and ears and said (after he asked what the base doctor said) that he, too, thought it was just a virus and a strained neck.  At this point, every ounce of my being was telling me that no, this was not a virus and a strained neck.  I know full well she didn’t do anything that would have caused a strained neck, and the kid sleeps in the craziest positions all the time and her neck has never hurt before.  Plus she’s never acted this sick with just viruses.  He said we can do blood work but was really advising against it and wanted to wait another 24 hours to just observe her and see if she got better.  I texted Mark, who also said we could just wait, and I gave the doctor plenty of dubious looks because if it had been just up to me at that point in time, I would have opted to have blood drawn.  Since the doctor seemed fairly certain it was just a virus and didn’t want to cause her “un-needed pain”, we decided to wait.  And now I really wish I hadn’t but hind-sight is always 20/20. 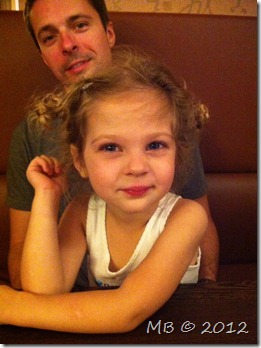 Long story short, Abbie was admitted to the hospital Thursday afternoon and will be there until at least Monday, possibly longer.  I’ll blog about it more later when I have time, but my lesson learned through this whole ordeal is that mother’s should ALWAYS trust their gut.  No one knows our children like we do, not even doctors.  Sure they have medical degrees and years of experience, but they don’t personally know our children most of the time.  Next time I will be much more of an advocate for my child since he/she can’t advocate for him/herself.  I knew something else was wrong, and I was right.

Oh no! I'm so sorry and hope she is better soon.

Thinking of you guys. Hope she gets better soon!

Oh no! I hope she's feeling better! I have yet to hear a positive experience from someone's who's had to deal with the PN hospital.

What a nightmare! Live and learn. I hope that little Abby is well on the mend by now. My prayers are with you and the family. What are you doing with little Ben?