Our final stop was near Olympia, Greece.  The actual port town was called Katakolon, and Olympia was about a 30 min bus ride from the port.

To be honest, at this point I was kind of “ruins’d” out.  Don’t get me wrong, they are very cool and fascinating, but this was our third day in a row of seeing them in super hot weather and I was kind of done with it all.  I’m glad we saw it, but again, I don’t think I’m dying to go back to Olympia any time soon. 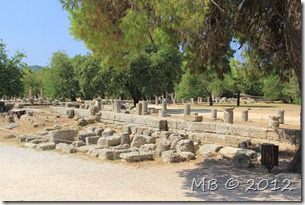 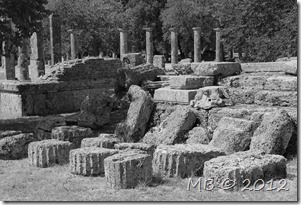 The Olympics date back as far as 776 B.C. and were originally in honor of Zeus.  There were also remains of a species of man found at the site of Olympia dating back to the 10th century BC. 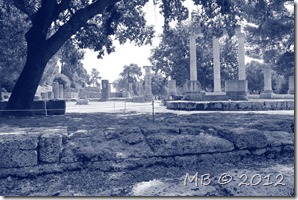 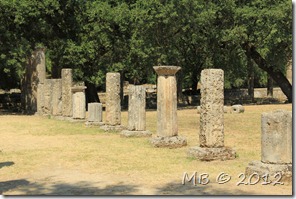 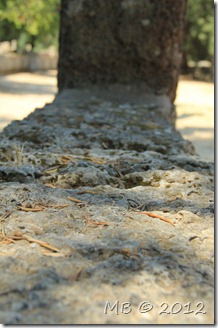 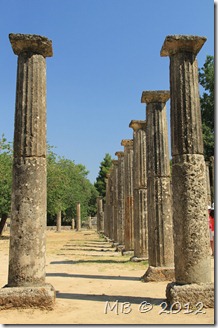 Mark had his nose buried in a Rick Steve’s book as we wandered around and he was pointing out to me what things were and I has half paying attention.  The columns above were part of the wrestling arena.  (I must have been more than half paying attention since I’m writing this over a month later and I still remember it.) 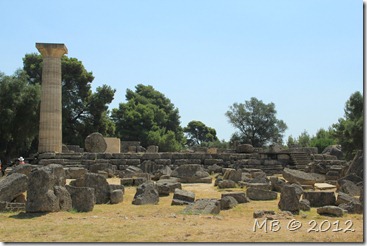 Below is the sculpture’s house that made the giant statue of Zeus, that is no longer on the site.  But this is where we made that statue. 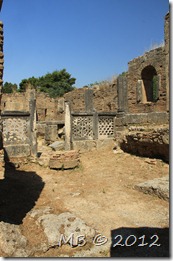 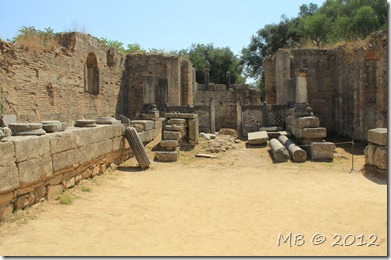 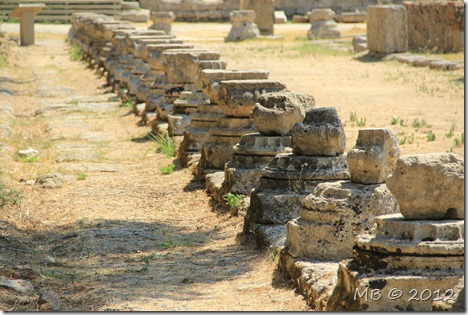 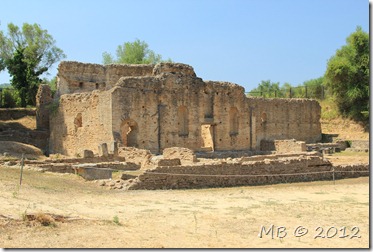 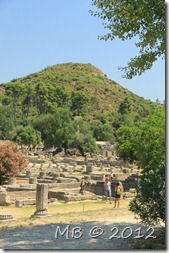 Here’s a close up of what the rocks looked like.  Olympia was very near a small stream, which at one point could have been much large, so maybe that would explain the shells. 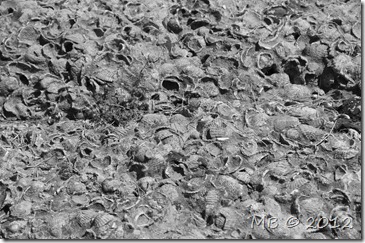 The site was rediscovered in 1766 and was thought to have been covered by repeated tsunamis in the area.  They thought at one point it was buried under over 26 feet of dirt. 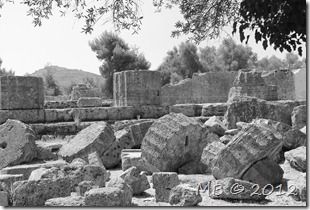 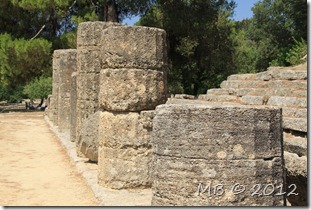 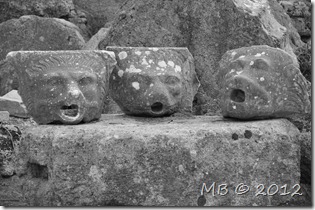 Looking at the ruins above, those fallen column parts don’t look that big, but some of them are.  I’m just under 5’9 for comparison. 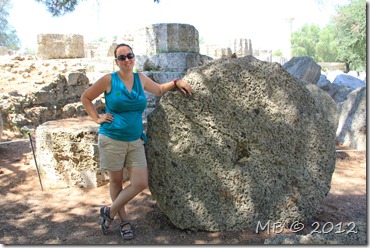 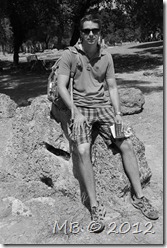 These are steps leading up to the ancient temple of Zeus. 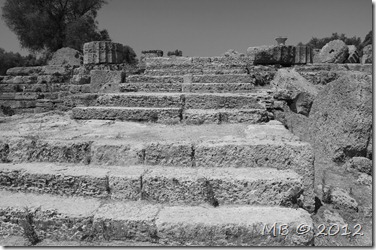 Here is the crypt, or the entrance to the old stadium.  Athletes used to put their stuff into the holes in the side of the walls while they competed.  Also a little bit of history Mark told me on our tour – athletes back in the day used to drink bull’s blood as kind of a “Red Bull” type of drink to give them a competitive advantage.  To test the athlete’s for this, which drinking it was illegal, they would have people drink the athlete’s urine to taste for it….  How would you like that job?  The official Olympic pee-drinker.  Ew. 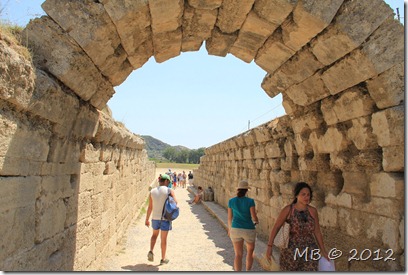 Below is the stadium.  You can see the starting line by where those people are standing.  The stadium could hold 50000 spectators. 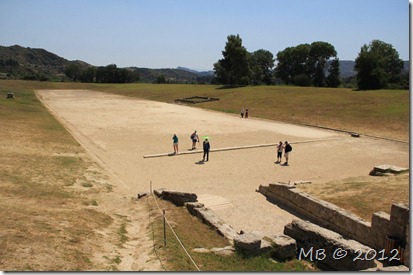 Mark is standing by where they light the Olympic torches in current day, to be carried to wherever the games are being held that year. 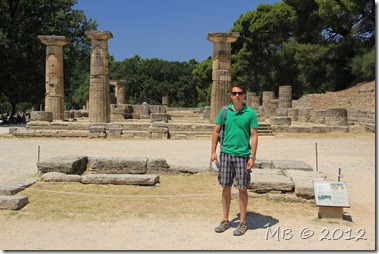 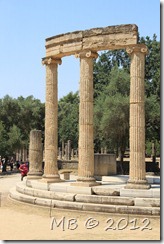 After we wandered around the Olympic grounds, we headed over to the museum that held a lot of the artifacts that they’ve found in Olympia. 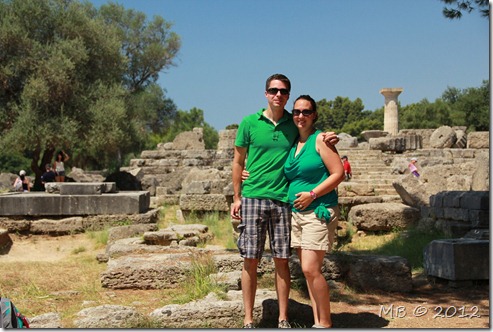 Our last day on the cruise was spent at sea, which was really nice.  We spent most of the day reading by the pool and that was just what we needed after all the sight-seeing of the week.

I cannot believe it’s taken me an entire month to write about this cruise.  I’ve really fallen off the blogging band wagon, it seems.  We just got back from Vienna and Bratislava and we’re heading to Milan and some place else this coming weekend.  (We haven’t decided where yet.)  And then we’ll be taking a break from traveling until the beginning of October when we’ll head to Rome and the Amalfi Coast with Mark’s family and then later in October we’re going to Ireland with my family.

In much more current news, Abbie is pretty darn sick right now.  I’m not sure what’s up with her and I’ve had her at the doctor, but she’s had a fever ranging from 100-102.7 since Sunday morning and she said her neck hurts.  So of course we’re all freaked out about meningitis, but the doctor said that she didn’t think that was the case, and Abbie’s neck hurts on the side (possibly her glands??), not on her spinal cord.  But she’s just not being her normal spunky self at all.  She’s super whiny and just lays around all day and doesn’t want to eat much.  I really hope she feels better soon.  I hate it when she’s sick.

I want to live in your pictures. lol

Wishing your Abbie a quick recovery! It's so awful when our little ones are miserable and we can't make it better.