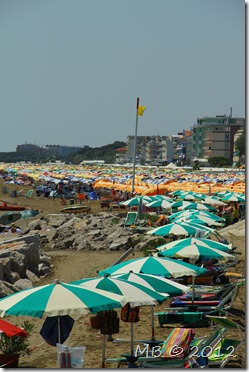 Mark’s mom and cousin arrived in Venice at 11:30am and decided they wanted to hit the ground running and do a bit of sight-seeing before we headed home so they could rest.  (More power to them – I think if you want to flip your system quickly to get on to this time zone, that is the way to do it.)

Caorle is just east of Venice on the Adriatic.  We had been there in March of 2011 and I took pictures of Abbie in this exact same spot.  It’s amazing how much she’s changed in less than a year and a half. 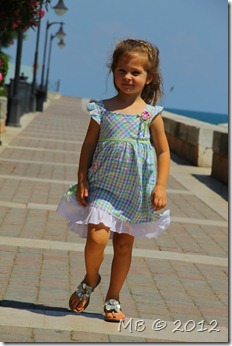 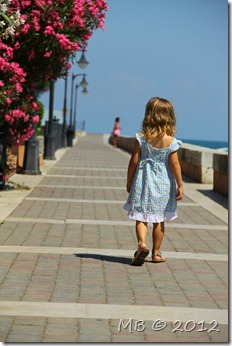 In my previous post about Caorle, I’d said that I didn’t think this tower was leaning, but now I think it is.  Or it sure looked like it was anyway. 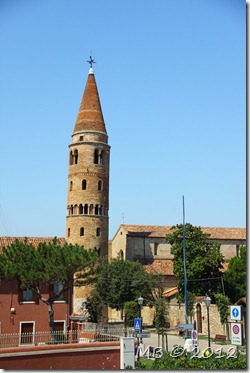 We wandered along the walkway by the water, admiring all the carved rocks.  There were people swimming (for exercise I think) on the other side of those rocks, which I thought was interesting.  We saw three old guys climb over the rocks with their goggles and swim caps on.  Seems like that would be a good way to get exercise, but I’m not sure I’d be brave enough to do it. 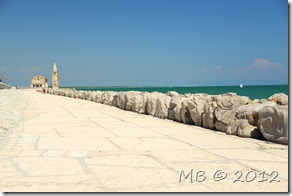 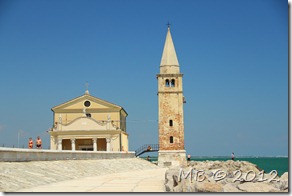 There was a surprising amount of people at the beach for a Wednesday.  I would love to come down to this beach and hang out some time.  We’d better pick a date soon since our hot days are dwindling rapidly. 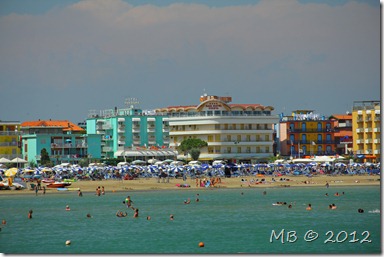 I love the colorful downtown area of Caorle.  Like Burano, it seems like it would be a happy place to live. 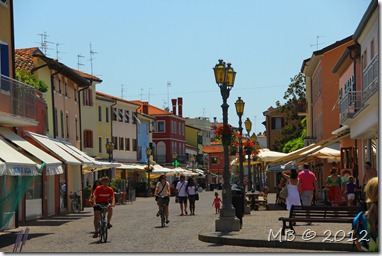 After eating lunch at a place overlooking the beach, and wandering around the town for a bit, we headed home so I could start dinner and they could rest. 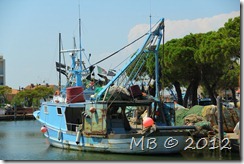 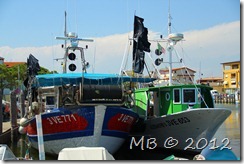 On a side note, I normally love blogging, but right now it’s turning in to more of a chore than being fun.  I think it’s because I have a lot of blogging that I want/need to do about where we’ve been and what we’ve been doing, but I just don’t have the time lately to side down and do it.  We took over 3000 pictures on our cruise and I haven’t even started going through them to decide which ones I want to use in posts.  And I don’t want to wait too long to write about where we’ve been because I’ll forget things in the meantime.  August and September are going to be really busy for me, so hopefully I’ll get caught up on these soon!

Beautiful little lady! Congrats. I am glad you enjoyed your vacation!

The downtown is really colorful. It's a pleasure to take a walk there. So glad for you!