**I had read somewhere that sometimes if you tell kids that if they poop in the potty they’re feeding the fish.  And kids want to help feed the fish so this makes them want to poop in the potty.  Abbie is an animal lover, so I figured maybe this tactic would work on her, so I gave it a try.  Went something like this:
Me: So Abbie, you know if you poop in the potty, you feed the fish!  …  Yeah, if you poop in the potty then we flush the toilet and it goes down to the river to feed the fish.  <Abbie is eyeing me suspiciously.>  I’m sure there are lots of fish down there that are hungry so let’s go poop on the potty!
Abbie:  …. Mommy, fish don’t eat poop! <in a completely disgusted tone of voice>
Me:  <thinking, crap, well that just backfired big time>
Abbie:  What do fish eat, mommy?
Me:  Ahh, well they eat grass and stuff and so your poop fertilizes the grass, so your poop does indirectly feed the fish.
Abbie:  Oh, okay.  But I don’t want to poop on the potty.
So she didn’t buy that unfortunately.  And she still hasn’t pooped in the potty.  I need to come up with something else. 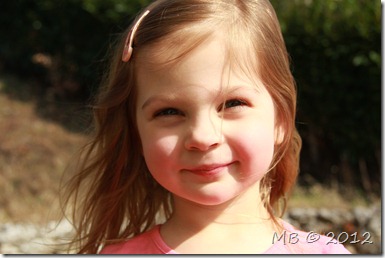 **Often when Abbie is misbehaving, we take away her TV watching privileges.   Many times she’ll do what we ask her to do after she’s already been given three chances to mind and her privileges have been taken away and then she’ll ask if she can watch her shows and I’ll tell her no, that’s not how it works.  You have to mind the first time I ask you, not after the third time.  The other day I had told her no TV shows for the rest of the day since she wasn’t behaving.  And picked up all her toys and then asked me, “Mommy, does that work?” (Since I often times tell her, that’s not how it works.)  She catches on pretty quickly to the way I phrase things.

**Abbie was watching a show about a rocket ship that took off and she decided that we were going to make the couch be our rocket ship.  Mark and I were sitting on the couch with her, with our feet up (at her direction) and she was counting backwards 5,4,3,2,1 Blastoff!  She did this a few times and then said, “The couch won’t blast off!!”. 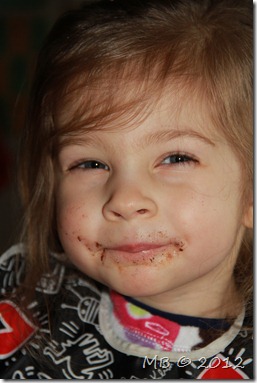 **Abbie has actually peed in the potty a few times.  The first time I told her that I was so proud of her and the second time she told me that SHE was so proud of her.  “I’m so proud of me, mommy.”
**Mark’s been working some crazy hours lately and Abbie is very aware that her daddy isn’t around much right now.  The other night we put her to bed and told her that daddy was leaving so he wouldn’t be there in the morning.  She said okay and seemed fine with it, until about 10 mins later when she was calling for us asking if daddy was gone yet.  =/ 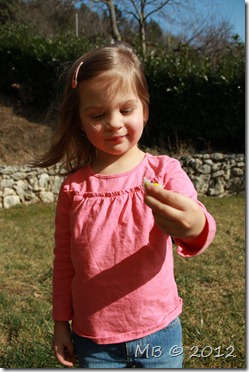 **The Taco Bell here gives out these little junky instruments in their kids meals.  Abbie loves the stupid things and she loves the cheese roll-ups from there even more.  Anyway, she got this little guitar from one of those meals and we were sitting in the BX food court and she’s pretending this guitar is a phone.  The people there probably thought she was nuts because she was holding this little guitar up to her ear yelling “Hello?  Hello?!  I can’t hear you!!  What?  I can’t hear you!" at it.  =)
**Abbie has been a TERRIBLE napper lately and she may be somewhat ready to give them up (although that’s debatable), but I’m DEFINITELY not ready for her to give them up.  She’s usually very good at staying in her bed during naptime, even if she wakes up.  She lays in there yelling for me non-stop, which is almost just as bad as her getting up.  The other day, I had already gone in twice to tell her to lay down and go to sleep.  She was downstairs in her room rolling around and jumping on her bed and calling for me on and off and I was upstairs with Ben asleep in the bassinet next to me watching her on the monitor, trying to relax a little.  I must have drifted off to sleep for a few minutes because I woke up and looked at the monitor and couldn’t see her in it.  (Sometimes it’s hard to see her since it’s an infrared monitor.)  I was holding the monitor close to my face trying to see if I could see her in it, when she walked into my room and said “Can I get up now mommy?”.  Needless to say it scared the sh*t out of me because she’d never gotten out of her room before without permission, let alone come upstairs and find me.  Lesson learned on my part… 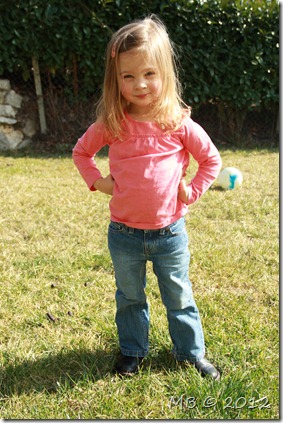 Oh my she is getting smarter and smarter! You are going to have a lot of fun on your hands when that little miss is older!

I have to say, I love waking up and seeing a new post from you. I check every morning (my time). Maybe we'll be able to get together when you and the family are back. Take care and talk to you later!