We took Ben in for a weight check today.  It’s been 7 days since his last weight check and he gained 12 ounces in those 7 days, which is terrific.  Babies usually gain 15-30g per day, and average around 20g per day.  In the past 7 days, Ben gained almost 42g/day, so he’s doubling the average, which he needs to do since he has some catching up to do.  He now weighs 9lb14oz and he should be up around 11lbs.  I have no doubt he’ll catch up soon since he’s eating a LOT right now.
Gaining weight was the good news.  Here’s the bad news:  Ben basically refuses to nurse.  He nursed fine the first month since he was gaining weight.  He’s never been a great nurser, but he got the job done.  We would feed him one 2 oz bottle of formula at night so he would take a bottle and Mark could feed him some.  But while Mark was gone and especially after he got back, right before Ben turned two months old, he started to get really fussy when I tried to nurse him.  He’d nurse for about 8 mins on average, and then he’d be super fussy and I couldn’t get him to latch on anymore.  I took that as a clue that he was full, so I would wait an hour or so and try to nurse him again.  We’d go through the whole routine again where I’d try to get him to nurse and he would get fussy and after 8-ish minutes he’d refuse to feed anymore.  Apparently he wasn’t full, he just didn’t want to nurse, which I didn’t even know could happen to babies once they know how to latch on.  I thought he instinctively knew that he got his food by breastfeeding.  And maybe he does know that’s where his food is, but he still doesn’t want to nurse.  It’s to the point now where I can barely keep him “interested” (aka – from completely losing it and just screaming at the top of his lungs) for five minutes before he’s done, let alone nursing from both sides.  He basically full on fights nursing now for the most part, and the more I try to get him to latch on, the harder he fights me and the more pissed off he gets.  I’ve even tried to use an SNS (supplemental nursing system), and he still refused to nurse.  I know I have milk because I can hear him swallowing and I can see it in his mouth when he pulls off to scream, but he just won’t stay latched on.  Now he’ll suck 2-3 times, swallow and then pull off and fuss.  I get him back on and we basically do that for 4-5 mins before he just won’t go on any more and is arching his back and pushing off against me with his hands and screaming.  So now I’ll nurse him for as long as he’ll let me, then feed him a bottle of expressed milk (2-2.5oz) then feed him a bottle of formula (2-3oz) and then go pump.  I can usually only get 2-2.5 oz out per pumping session, but I know I have the wrong size flanges for my pump.  I ordered new ones but they’ll take a while to get here.
I am frustrated by all of this.  I feel really guilty that I was basically starving him and I’m sad that breastfeeding isn’t working out this time around.  I can’t force him to nurse.  I know BM is better for him than formula, and I want him to get as much of it as possible, but I don’t know how feasible it will be to pump exclusively either.  They’ve been telling me that in order to keep my supply up I need to try to nurse him, then feed him a bottle and then pump – every 1-2 hours, around the clock.  That’s just not possible.  If he was my only child, I might be able to keep that up for a while, but I have Abbie to take care of also, and I need to be realistic as to how much time I can dedicate JUST to feeding Ben.  I’m not sure that basically 8-10 hours of nursing him, feeding him and pumping for him a day is anywhere near realistic.
So I’m just going to try to get over this huge guilt I’m feeling for not being willing/able to devote all of my time to breastfeeding him and I’m just going to do what I can.  Sometimes in the morning he’ll nurse for 10 mins on each side (and then drink a 2-4 oz bottle…), which is pretty good.  If I can keep that up, and then also do 3-4 pumping sessions a day, so he’s getting some expressed milk in the bottles instead of all formula, I’ll be okay with it.  Not happy, but okay with it.  I’m not sure I really have a choice at this point.  I’ll continue to attempt to nurse him for as long as he’ll let me and then I’ll continue to pump as long as I have a supply.  I’ve never been able to pump very much though, so we’ll see.
I’m so glad there’s nothing physically wrong with our little Ben.  I just wish that he wasn’t putting up such a fight against nursing.  I had no clue babies even did this sort of thing, but apparently it’s not that uncommon.  Bummer. 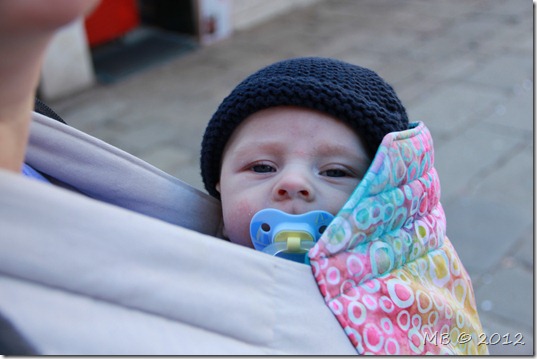 Chin up Momma! You are doing a fantastic job and little (and growing) Ben appreciates all that you do for him. Isn't it funny, or not so, how he can assert himself at such a teeny state? You are giving him all of you and Abbie gets her share too. You are a great Mom Monica! I think it's normal to feel guilty, but I also think you feel that way because you care so much about your little one.

Gosh, breast feeding problems are so, so hard for mama to deal with. I was there with Sierra. It's great that you've found a solution, and I think that you SHOULD continue to nurse him until he gets annoyed and then supplement. There's a good change that something will change and he will go back to BF as long as you keep making that the first option. I assume you've tried various positions, etc? Don't worry, Monica, all will be well. Pumping is a pain, yes, but it's awesome that you're continuing to do it. I agree that pumping every 1-2 hours with a toddler is unrealistic. And ANY breastmilk is better than none. Beyond that, a happy, sane mama is the most important thing, regardless of food source.

I am glad that you found your answer. :D
I had to go through the attempting to bf and then pumping thing with Eliana. It was harder than hell, especially because I have trouble producing breast milk.I felt like I was chained to my pump and it was awful (just being honest). I understand if you can only do it for awhile and DON'T beat yourself up about it. He will still grow up to be happy and healthy regardless of the fact you had to supplement with formula. Hugs.

Em didn't tell you but she also at one point had gone to a lactation consultant. Do they have such a person in Italy?

Monica, have you sought advice from the BFing group in Aviano? I will FB message you Jenn-O's contact information and maybe she can help you out!

Monica, I am so happy to read this! I've been thinking about your little guy a lot.