We’ll see how this goes 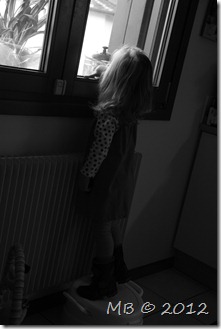 Abbie watching the jets fly by.

It seems like every time Mark goes TDY, I get sick right before he leaves, and this TDY was no exception.  The day before Mark left I started getting a stuffy nose and sore throat.  My ears hurt, I had a ton of sinus pressure and a little pain and I had a fever.  Perfect.  Luckily ibuprofen is helping all my aches and pains, because that’s really all I can take at this point.  The joys of breastfeeding.  If I take any sort of decongestant, most likely it will dry up my milk supply also and I’m not willing to risk that.

I tried to warn Abbie that Mark was going to be gone this time.  She’s been really attached to him lately and every single morning when I get her up she asks where daddy is.  I tell her he’s at work and she says “Well he’ll be home later.”  And then when she gets up from her nap, she also asks when daddy is going to be home.  So I wanted to warn her that he was going to be gone for a couple weeks instead of him just disappearing and we’ve been talking about daddy leaving all week.  Mark also talked to her the night before he left and told her he was going to be gone for a while and she said “But you’ll come back, right?”  After we’d put Abbie to bed that night, she’d call out a couple times and ask Mark if he was still here or if he’d left yet.  He’d say he was still here and she’d reply with “Okay daddy.  I love you.”  It was pretty hard to listen to.  It’s to the point where I don’t get sad for myself that Mark is leaving, but my heart breaks for Abbie that she’ll be missing her daddy.  Thank God Ben will be oblivious to the fact that Mark is gone for a while yet.

I’m not sad that Mark is gone (well a little), but I am scared this time around.  I’m nervous about handling both kids on my own for the first time all day AND all night, especially with my lack of sleep and the fact that I’m sick (which is probably caused by my lack of sleep).  I still haven’t exactly figured out when I’m going to shower since I always do that when Mark gets home from work so he could watch the kids for me.  And I’m hoping I can handle Abbie’s bedtime routine by myself since Mark always helps with that also.  One of us would get Abbie ready for bed while the other handled Ben, since he’s pretty screamy in the evenings.  I’ll figure it out somehow and hopefully I’ll have it all down by the time Mark gets back.

Luckily things have been pretty good so far.  Ben is getting past his “cry all the time” stage, which is really nice, and Abbie has been really good about taking naps for me lately.  Today I told her it was naptime and she walked in to her room and was in bed by the time I got in there.  That is most definitely a first.  Now if she goes to bed at night that easily I’ll be so happy.  And if I can get Ben to go back to sleep without crying for an hour after his early morning feeding, I’ll be even happier.  I’m really hoping I can get him sleeping better in the next couple weeks.  I’m going to try to get him into a routine during the day to help him switch his routine at night.  I’ve been just letting him sleep when he wants to sleep during the day and now I’m going to try an adapted version of Babywise.  I don’t even have that book, but I know what it’s about and I’m going to take try to get him onto a loose schedule during the day so he switches his days and nights.  Wish me luck.  I could really use some more sleep right about now! 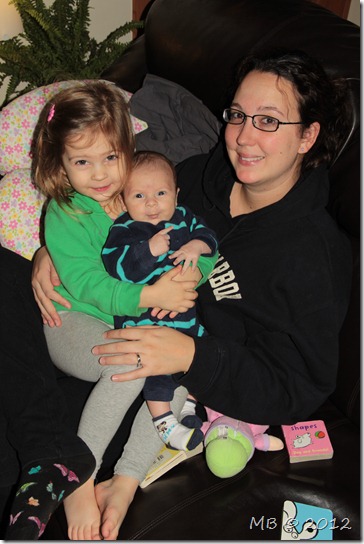 I hope you can get through your husband's TDY easily. I know those first couple days are going to be especially tough. Does Ben like to be swaddled at all? After an hour or more of the fussiness with Callie, I swaddle her to calm her down. It worked for me last night after about 2 hours of fussiness and I was ready for bed. (At 1 am in the morning.)

You have your hands full! If you want—I would be more than happy to do this—next week maybe I can come over for a couple days, maybe for like an hour in the afternoon so you can shower and get a break! Let me know what works for you. I'm busy on Tuesday and Wednesday, but other than that I think I'm free. I hope you start feeling better soon!