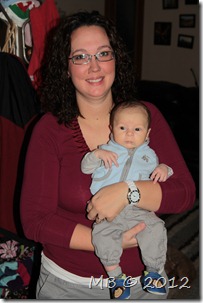 This weekend my friends here in Italy through us a baby shower.  Brittney, Jennifer and Cassy coordinated the whole thing and they really went all out!  It had a Winnie the Pooh theme and they thought of everything!

The favors were jars of honey!  I loved that it was something that people could use!  And Brittney did a great job with all the tags. 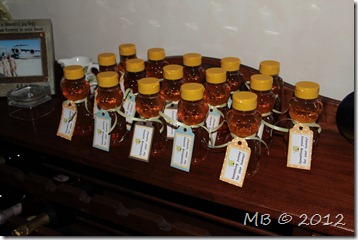 And check out this cake!!!  Can you believe it?  It was almost as big as my wedding cake!  I wish there was a way I could keep all the characters on it, but they’re made of fondant.  Anyone know how to preserve fondant? 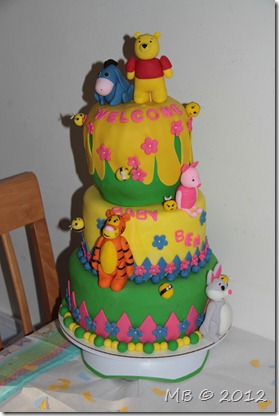 We ate good food and had fun talking.  Ben got passed around quite a bit, as he usually does when I’m around friends.  I love that everyone loves to hold him and help with him.  It makes up for the fact that family isn’t here to admire him.

Ben with Lisette, Tisha, Julia, Cassy and Taryn and Felicia! 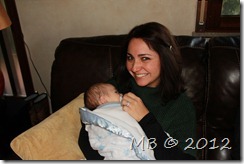 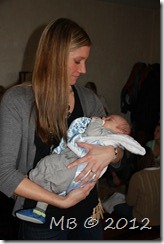 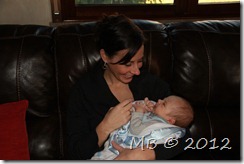 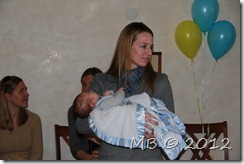 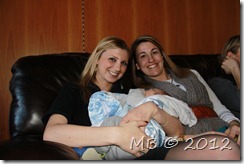 I feel so lucky that all these people came out on a Saturday to celebrate Ben’s arrival, especially when we really don’t to spend that much time with our husbands.  I am so lucky to be surrounded by such great people while we live in Italy. 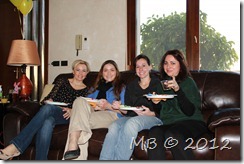 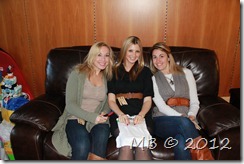 They had a onesie decorating contest and people got quite involved in it!  It was fun to watch everyone be creative.  I got to pick my favorite (which was REALLY hard) and the winner one a prize. 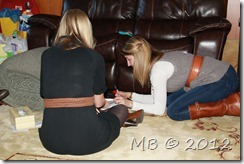 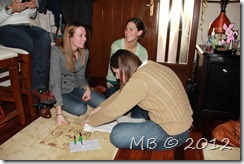 Jessica and her trio of iPhone’s for inspiration. 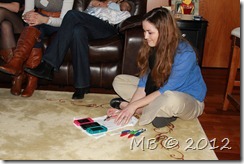 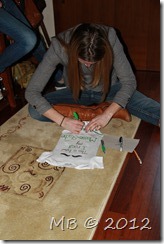 We also played a game where Jennifer brought out a tray full of things and then we had to try to remember everything we saw on the tray.  My memory has been pretty much shot so I didn’t stand a chance at winning that one. 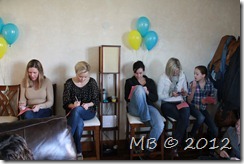 Me with Jennifer, Cassy and Brittney and their onesie, which says “This is how I rock my moose-stache”.  (Mark’s call sign is Moose – hence the moose theme).  That’s also the diaper cake that Tracy made me! 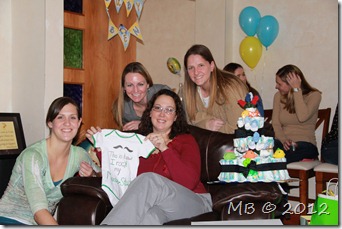 Me with Taryn, Felicia and Kelia and their onesie that they used a Kleenex box for to get the lines straight.  Really cute idea! 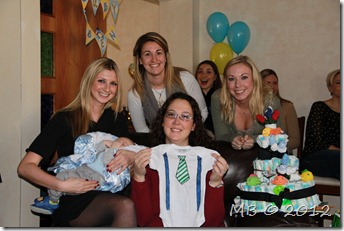 Me with Kristin and Jennifer and the onesies they made.  I thought the iPood one was hilarious!! 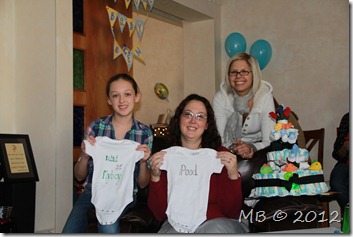 Jessica and me – I chose her onesie as the winner.  It was a moose with a mustache drawn on it.  So cute! 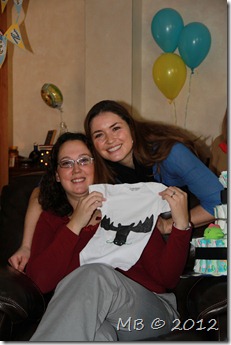 I can’t believe all the work that Brittney, Jennifer and Cassy put into this!  I’m sure Brittney put hours of work into all of the things she made on her Cricut machine.  It really makes me one, because everything she made was adorable!  Jennifer hosted the shower at her house and had the whole place decorated with balloons and other decorations.  Cassy made these really cute Winnie the Pooh sayings in frames, which I will post about later since I am going to hang those in Ben’s room, along with some of the decorations Brittney made.

I’m really, really lucky to have such great friends!  (And now you need to all have babies so I can return the favors!!)  *grins* 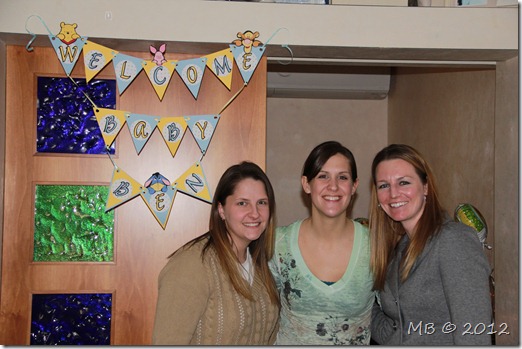 Oh my goodness, that looks like one of the best showers I've ever seen. I wish I could go back in time and attend :( I'm so glad you had a great time! That onsie-making game looks like so much fun!

Glad you had a wonderful time :)

I'm glad you had a great time as well. Cassie gets the credit for the honey jars and labels, she did those on her own :) It was fun planning and seeing it all come together. Glad you liked it :) I thought it was fun too, nice to see so many people I haven't seen in a while. Cassie mentioned that we will have to get together one day to decorate Ben's room :)

You look great! Glad it was a great time for everyone. =)

I love the favors and the cake! I'm a terrible artist and have gone to a baby shower where we decorated onesies and I felt so sorry for the little girl if she had to wear mine ever. LOL

Awww! I am so sad I missed it and am really missing Italy as of late. Tell everyone I said hi!