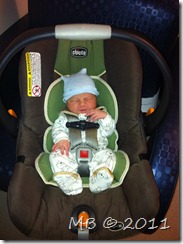 I’m still trying to decide if it was harder going from no kids to one kid, or from one kid to two kids.  The verdict isn’t out on that one yet. 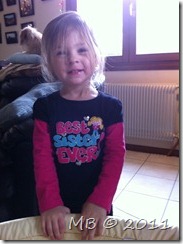 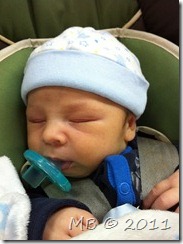 Ben seems to be an easier baby than Abbie was.  Abbie was an exceedingly high-strung, high maintenance baby.  That paired with the facts that I had no clue what I was doing and that Mark was so busy with training he was very little to no help at all made for a pretty rough transition.  I definitely feel like I’m more in control this time around.  I know what I’m doing and I don’t freak out over everything.  I’m not worried about my milk supply or him nursing or peeing or pooping enough.  I feel like I have a pretty good handle on that side of things.  However, I never do well with sleep deprivation.  I LOVE my sleep and you just don’t get much sleep with a newborn and a 2.5 year old around so that’s hard for me.  Ben will sleep one 4-5 hour stretch at night, on a good night, but then he’s up every 30 mins to hour after that, unless I bring him to bed with me, and then he’ll sleep for another couple hours.  I usually last about 1-2 times of getting up with him every hour before I just bring him to bed with me. 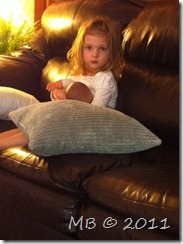 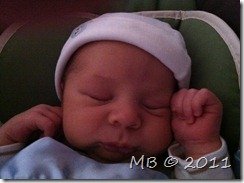 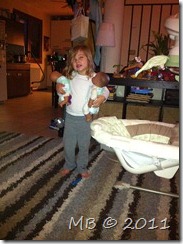 Abbie has had a really rough time adjusting, which is to be expected when she’s used to being our one and only for 2.5 years and all of a sudden there’s this other little thing taking up all of my time.  The weird thing is, she’s perfectly fine with Ben.  She loves him and loves to help with him and give him kisses and hold him.  Occasionally she’ll get a little jealous when he’s nursing all the time, but other than that, she doesn’t show much resentment towards him.  She has, however, turned in to our little Jekyll and Hyde.  Normally she’s very sweet and listens as well as you can expect a 2.5 year old to listen, but then there are moments where I seriously wonder what the hell I got myself into.  Abbie wants to be in control of everything, particularly who does what for her.  And 10 times out of 10, she wants the other parent than the one that’s currently helping her.  She won’t let you change her clothes or diaper if she wants the other parent.  She won’t stay in bed, she won’t let you brush her teeth or hair or give her a bath.  It’s a full on battle, with kicking, screaming, slapping, crying, etc.  To say it’s exhausting would be a vast understatement.  Getting her to go down for a nap or to go to bed at night is a challenge.  At night, she asks Mark and I both to come in at LEAST 4 separate times to tuck her in or give her a kiss or any other excuse she can think of at the time.  If we let her keep calling, it progresses to a full on screaming fit eventually, and she doesn’t stay in her bed anymore so she’ll try to leave her room.  I know this is because she knows Ben is still out with us and she’s jealous and doesn’t want to miss anything, but I don’t know how to “fix” it.  The other day Mark tried to change her diaper to put her down for a nap, and it was World War III.  She was putting up a HUGE fight to the point where it took both of us just to get her diaper back on her.  We ended up leaving her in her room with the door shut (while watching her on the monitor) for a good 15 minutes while she threw her tantrum.  Finally she calmed down enough so we could go in, and she apologized without us prompting her too and then went right to sleep.  …???  All I can say is I’m very thankful that Mark was home for a while to help me through this phase with her.  However, he’s leaving for a few weeks in a couple weeks and I’m going to be doing this by myself for a while, and I’m honestly scared about that.  Hopefully Abbie will be mostly adjusted and Ben will be sleeping a little more than he is now (at night).  My fingers are crossed. 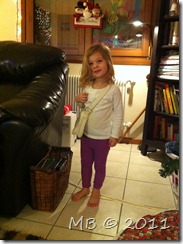 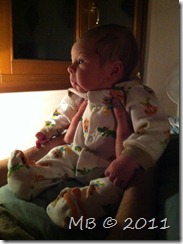 Does anyone have any suggestions as to how to discipline a 2 year old?  How to you respond when your child flat out tells you "no, I’m not going to do that” when you ask her to do something (or not to do something)?  Mark and I have a game plan for the full on tantrums, but just for general disciplining, what do you do?  And especially, what do you do when you’re tied down nursing a little one the majority of the day?  Any suggestions are appreciated! 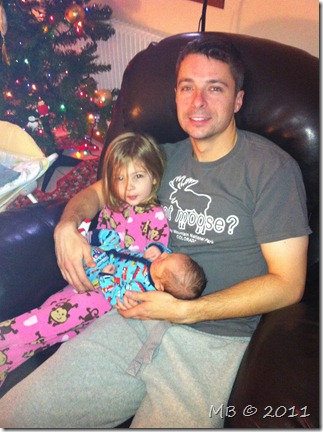 I know this is really a transition with her, we are having a hard one with Emma (not so much when we had Ellie but since the move) She would throw those all out tantrums and not stay in bed. Sadly we revered back to putting her in a crib so that she remembers that is what happens when we put her to bed. If she can get out be sure not to leave any pens or markers out. We woke up one morning and our kitchen was a nice permanent marker black.

Be patient with your self and her she will fall back in to the swing of things, give her 6-8 weeks after Ben was born.

Oh try and use double positive reenforcement, it will help her mentally know she's not always getting in trouble. More positive than negative.

Are you talking about Abbie, or my kid? Seriously, this is exactly the same situation here. Screaming fits, power struggles and Luca trying to maintain control over everything. We even get the, "no, Daddy do it!" or vice versa. I've got nothing for you because I feel like we are losing this battle.

Ellie didn't decide to dislike her sister until 2 months in. She has never been bad with her, but she has made negative comments. She also is a lot more emotional which can be frustrating. As for discipline, we use time out and set the microwave timer. She sits in the same place (bottom of the stairs) and cannot talk or whine during her time out.