During Mark’s 10 days off for paternity leave, he was able to take Abbie to the base library for story time and a visit with Santa.  This was the first time Abbie’s really seen Santa, but she wasn’t afraid at all!  Mark said that she was completely in awe of him and that she LOVED story time.  I was bummed that I wasn’t there to witness it, but I’m so glad Mark was able to take her.  He loves doing that stuff with her and never gets the chance to because of his work hours. 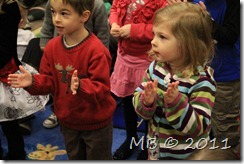 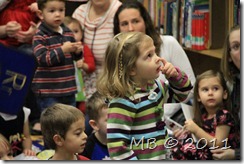 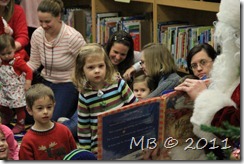 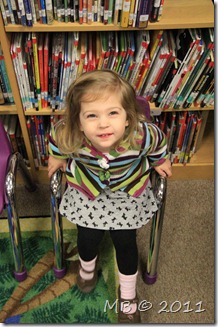 Mark said that she had no hesitation going up to him and was really excited to talk to him.  She asked Santa if he was going to come to her house, although I don’t think she quite gets the theory behind that yet.  (That he brings presents.)  I think she just wanted him to come to her house. 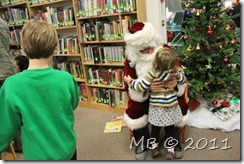 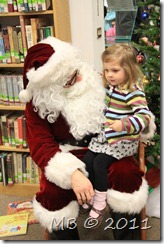 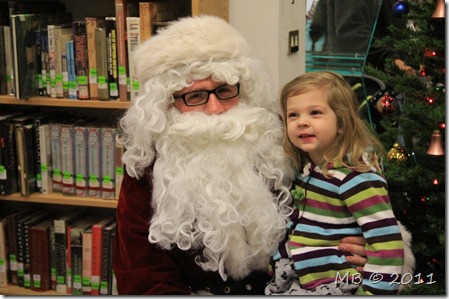 Hopefully next year I won’t feel like I just got run over by a truck and all four of us will be able to go visit Santa together!

PS:  I’ve talked to Abbie babysitter and asked if we could switch days so I could start taking Abbie to story time on a weekly basis.  I know she loves being around the other kids and she loves going to the library, so hopefully we can work that out where I can start taking her there regularly.  Plus they have dogs at the story time that the kids can pet and Abbie loves anything to do with animals also!

Abbie is getting so big, and SO pretty! I like the pic where she is picking her nose, I seem to have quite a few pics of me as a kid doing the same, lol.

I hope you had a wonderful Christmas, and will chat with you soon! Lots of love from Iowa!