Pushing for an induction 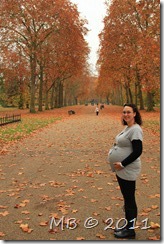 I am much more nervous about giving birth this time around than I was with Abbie’s birth.  The size of this baby alone, is enough to make me nervous, but there are more factors than just his size.

But just for kicks and giggles, let’s talk about his size first.  I am hoping and praying with all my might that the u/s’s are off and he’s not actually 3 weeks ahead of schedule, but I really don’t think they’re that far off, for a few reasons.  Abbie was 9lbs 9.2oz at birth, and boys tend to be bigger than girls at birth.  Big babies run in Mark’s family and since Mark and I are both tall, our odds of having another big baby are pretty high.  I have a ton of stretch marks from my pregnancy with Abbie, except already, at 35 weeks, they’re getting bigger.  Not wider, but they’re getting higher on my belly than they were before.  Hopefully that means that I’m just carrying him higher, but I don’t know.  And this little guy moves a LOT.  Like almost non-stop, to the point where he’s bouncing around in there so much it actually wakes me up at night.  The NST’s they’re making me do are a complete joke.  His heart rate is supposed to go up at least two times in 20 mins while I’m hooked up to the monitors, and I think the least amount of times his HR has gone up during one of our sessions has been four times.  If he’s, by chance, actually being still, all I have to do is poke him and he squirms.  I’m not sure if I feel him so much because he’s so big and just doesn’t have much room to move or he’s even more active than Abbie was.  Either way, it’s scary.

“Shoulder dystocia” keeps being brought up because of his size.  This is a huge fear of mine – that he’s going to get stuck.  I would love to give birth vaginally, but it scares me to think about what could happen if he does get stuck.  I’d like to think my body can handle giving birth to a 10+lb baby, but that’s a BIG baby.

I’m also worried about the possibility of having to give birth in an Italian hospital due to space not being available at the base hospital.  Since they’ve labeled my pregnancy a “complicated pregnancy”, I really don’t want to have to go through a complicated birth in a foreign hospital and having to deal with the way they do things and the language barrier.  If things are going to go wrong during the birth, I want to know exactly what’s going on and not have to rely on a translator to relay info to me.  Plus if I end up needing a c-section, they don’t allow dads to be in the room and they immediately take the baby away from you for a few hours and don’t let either of us see him.  (From what I’ve heard anyway.)  I’ve also decided I do want an epidural in case there are complications.  I’d rather not have to go through a bunch of maneuvers and stuff while I can fully feel everything if he does get stuck.  And if I give birth in an Italian hospital, there’s no guarantee that you’ll get an epi, even if you ask for it.  It basically depends on if someone is around to give one or not, and if they’re not, they won’t call an anesthesiologist in to do one unless they deem it necessary.  I’ve also heard people say that they didn’t let the baby stay in their rooms with them while they were recovering.  They kept the babies in the nursery.  So pretty much having to give birth in the Italian hospital terrifies me… like REALLY terrifies me, and I’m not going to know if I have to go there until I go into labor and call base to see if they have room for me there.

Lastly, if I do go in to labor on my own, I’m worried about what we’re going to do with Abbie last minute.  I’ve asked a few friends if they’d be willing to watch her for us, but one of them works full-time, so that really limits when she’s available and one of them works part-time and lives 45 mins away, so if we’re in a rush, I’m not really sure what we’re going to do.  Another one has said that she’d help, but I really don’t know her schedule or if she’s willing to stay at our house.  I think it’s going to be a matter of us scrambling last minute to get Abbie and all her junk and her car seat to someone else’s house on our way to the hospital, which really isn’t the ideal situation at all, but it’s either that or Mark stays with her and I go by myself.

So basically, I want them to induce me.  If they could induce me between 38 and 39 weeks, that would be ideal.  I would like to experience going in to labor on my own, but there’s so much at stake here.  If they induced me, he wouldn’t be as big as he would if he came on his own, they would induce me on base, so I could give birth there, and we could set up care for Abbie in advance.  It would pretty much solve all of my problems, with the exception of him getting stuck, but again, he’d be smaller than he would if I carried him full term, so that would help.  However, they said that they wouldn’t induce me unless he’s measuring over 10lbs or I have blood pressure issues.  (Which, by the way, at all my NST’s, my blood pressure has been 100% normal…)

Your post stressed me out so I can't imagine how stressed you are. Praying that everything works out and goes smoothly for you! (Love the picture btw).

I'm sorry to hear that they won't really consider an induction! I'm already getting the "so do you want to go ahead and schedule an induction?"

I'm 37 weeks now though. I hope you get the birth plan you are wanting and that you can have your baby at the base hospital!

it sounds scary if you go to the Italy one.

Also I don't know if you are considering it but I think over there they won't do circumscions either? My brother was born in Italy and they didn't give him one.

I just delivered in Pordenone in August and some of the things you have heard are untrue. To start with the epidurals...if you took the 34 week class they offer at Pordenone you are pretty much guaranteed one. I did have to wait a half hour for someone to get there. If you do want one they DO try and accommodate it as soon as possible. I do suggest if you go there to call the MSG (l&d) to get a copy of your records to give to them. The language barrier is NOT that bad, they do speak some broken english. As far as the babies rooming in...they do room in...unless your child is premature then they stay in the nursery. Also there is an "American Room" with two beds, you might be in there with a fellow American. Also, your husband will not be able to stay there, as of August they are standing firm on that.

I was terrified also of delivering there but it is honestly the safest place to deliver if something does go wrong and it is not as bad as everyone makes it out to be, it is truly what you make it. Just remember to speak up for your self. If you have questions you can email me at jusika@me.com

I hope they allow you an induction if that's what you really want. Crossing my fingers!