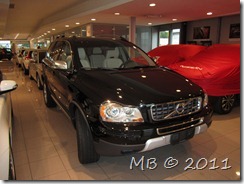 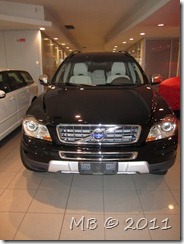 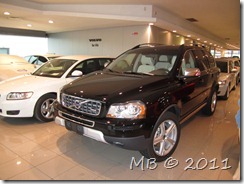 Last month, Mark and I picked up our 2012 Volvo XC90 R-Design.  We ordered it while he was in Afghanistan and I was in the States.  We picked out which options and packages we wanted for it, along with a few accessories, so we were and are pretty excited about it. 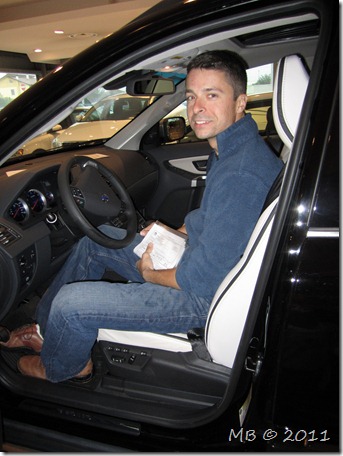 We had always said we’d never get a brand new car because it’s a waste of money.  As soon as you drive it off the lot, it depreciates so much in value and it just didn’t seem worth it to us.  However, Volvo has a pretty good military program in here, so we could buy this vehicle over here for like $8000 less than you could get it in the States because of the discounts they give is.  So we felt like it was a pretty good deal and we wanted to take advantage of it. 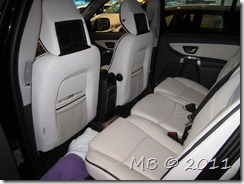 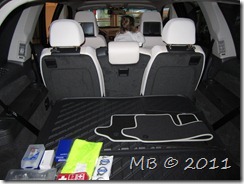 We had a tough time deciding if we wanted a silver exterior and dark grey interior, or if we wanted a black exterior and a light interior.  We ended up going with the black exterior/ light interior, and we’re both pretty happy with it.  It might be harder to keep clean, but we have kick guards on the back of the front seats so the kids won’t be able to scuff them up with their feet.  We also decided to splurge on the rear seat entertainment system, which hopefully will help us out on longer car trips.  The kids can either watch a DVD together, or one can watch a DVD and you can hook the other TV up to a game system.  Should come in handy eventually. 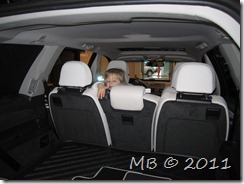 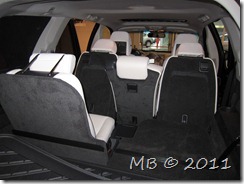 This car is pretty cool.  It has a TON of safety features, which is why we liked it in the first place.  But it also automatically detects my phone via bluetooth as soon as I get into the car, and will automatically start playing music I have on my phone.  This probably isn’t as big of a deal in the States where you have radio stations that are all in English, but most of the stations here are in Italian and some of them play American songs, but some don’t.  I like having my music with me and not have to do anything except get in the car.  My phone stays in my purse, but I can make calls from the car using the bluetooth system, so it’s always hands free.  It’s really, really nice, and I love it.  It also has the active bending headlights, so when we go around corners, the headlights turn in the direction we’re going.  It actually makes a pretty big difference as we found out on the winding mountain roads around here. 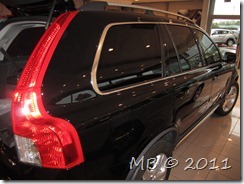 The only complaint we have about the car is that the turning radius absolutely sucks.  The faster you go, the better it turns, but turning at slow speeds is horrible.  Our garage/driveway area is pretty tight and we had to mess around with the Volvo and our VW for a few days before we found a parking configuration that worked where we didn’t have to do a 24 point turn to get one or both of the vehicles out.  The first few days we had the Volvo, I’d be out on the driveway telling Mark how far he could back up and go forward without hitting the other car or the neighbors fence, and it would literally take 5-7 tries before he’d be clear of both and we could pull out of the driveway.  But we have it figured out now, so it’s better. 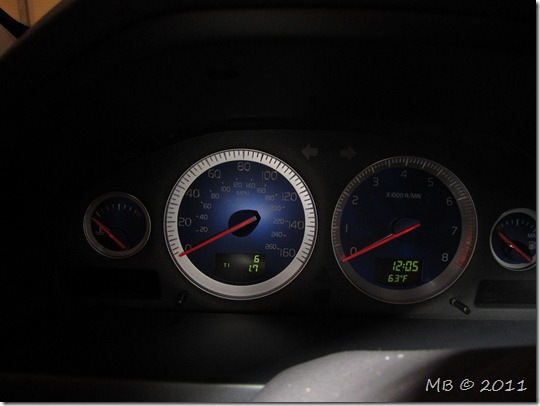 I wish it still had 6 miles on it.  I think it has over 700 miles on it already, but we’ve gotten a lot of use out of it, including two trips to Ikea.  And the double BOB fits great in the back of it, so I’m excited about that.  Hopefully it’ll last us quite a few years!

Looks like a fun new toy for you both -- I agree, safety is so important and you're going to get great use from the entertainment system. Yay that your big new purchase finally arrived!

It looks like an awesome car! And a great deal. I love the bluetooth in my car, it's nice being safe and it's so easy. I'm glad you finally figured out how to park the cars without a 24 point turn hahaha what a nightmare that would be every day!

Ooooh, I am SO jealous!!

Prior to my accident, we had his & hers Volvo S60s (Hubs still has his). I love love loved mine -- her name was Lola! -- and literally cried when we had to trade it in since it couldn't accommodate a power wheelchair. The XC90 was supposed to be my next car but it won't work with the power chair lift either, so we got a Honda Odyssey instead.

As for turning radius, ha! That was our one complaint about both of our Volvos. Hubs laughs that my minivan turns better than his S60.

This makes me so excited to get a new car out here! We rented the Ford equivalent of the one you bought when we drove to Baltimore and it had the bluetooth feature. I fell in love with it. It's so convenient!!

It is GORGEOUS! You will be so happy you splurged on the entertainment package. Yay for new cars!