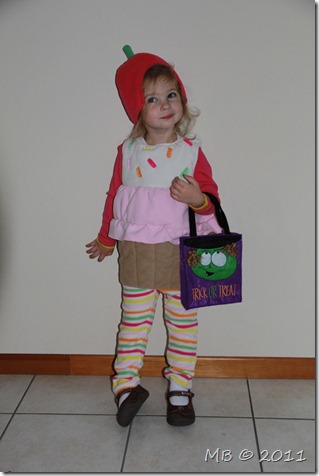 This year we took Abbie trick or treating on base at the Fall Fest.  It was basically a bunch of vendors handing out candy to all the kids and some of them had games set up for the kids to play.  They also had haunted houses, bouncy houses, mazes and a pumpkin patch, but we didn’t make it to any of those things.  We’ll try to do it next year. 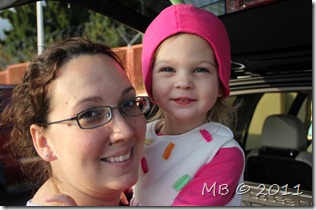 Abbie really enjoyed looking at all the other kids in costumes.  I think she was a little bit overwhelmed because she went from being super excited to really quiet and back to excited a few times.  She didn’t know where to look or what to do next.  I’m glad Mark was around to witness it.  (And so was Mark’s brother, Ryan, pictured below.) 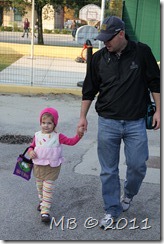 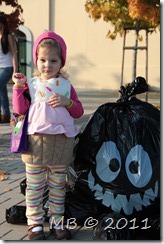 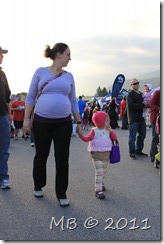 Abbie got the hang of trick or treating pretty quickly.  She was pretty shy, but she’d say “trick or treat” and a few times I reminded her to say thank you.  Sometimes she’d start walking away from the person and then go running back saying, “I forgot to say thank you!” 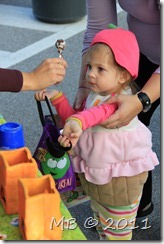 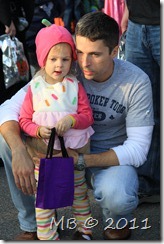 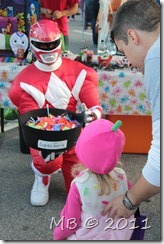 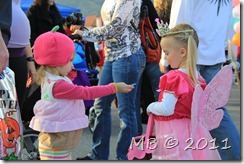 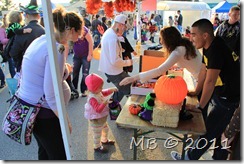 Mark helped her with the bean bag toss.  She had fun trying, but she missed the holes even when she was 6 inches from them.  =) 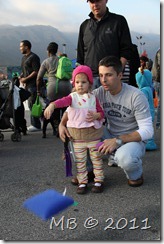 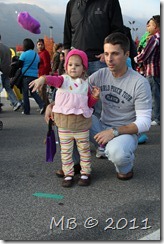 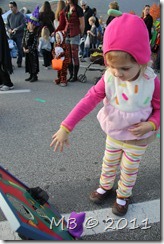 She really liked choosing a duck at this vendor.  The ducks had numbers on the bottom of them and the prize you got was based on the number you pulled. 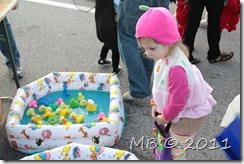 And then we ran into this guy…  Abbie was terrified of him. 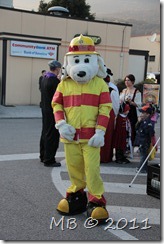 She wanted absolutely nothing to do with him, but she kept a VERY close eye on him.  She had to walk a few feet away from me to get candy from a lady, and she started out a few times towards the lady, but watching the dog.  As soon as the dog would move anything, she’d come running back to me.  She told me she didn’t like him and that she was afraid of him and that he scared her.  And 4 days later, she’s still talking about how she didn’t like the puppy. 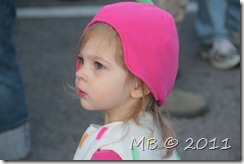 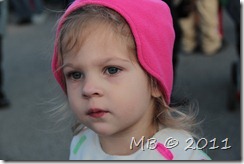 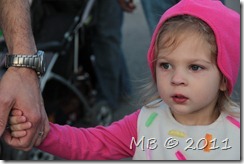 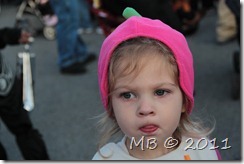 Finally she couldn’t take it anymore and wanted Daddy to pick her up, but even walking away, she still kept a close eye on him.  He rode by on a fire truck while we were getting food and of course, she spotted him right away then too and had to keep a close eye on him to make sure he wasn’t getting any closer to her.  Guess now’s not the time to take her to Disney.  =) 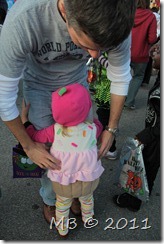 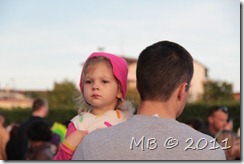 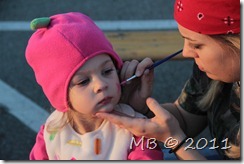 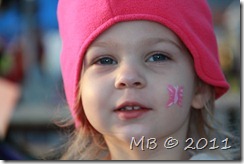 Luckily, Abbie isn’t big into candy so she hasn’t really wanted to eat a bunch of it, and the few she has picked out, she hasn’t even finished.  That’s fine with me.  Mark, Ryan and I dug through it and got the few pieces out that we liked anyway.  The rest of it will be around for a month before she gets around to finishing it.

She is the cutest little cupcake!! So funny about her and the fire dog -- Callum saw him and right away started making his noise for "dog" and then ran up and wanted to pet his nose. How funny a few years' age difference makes...I'm sure by next Halloween he'll be terrified of it too! ;)

I love her cupcake costume! So cute. And, I don't blame her, a giant 2 legged puppy in a fireman costume, very suspicious. lol I also can't get over that she would run back to say she forgot to say thank you! So cute! You are raising such a sweet little girl!

I also left you an award on my page!
http://janeysfavoritethings.blogspot.com/2011/11/awards.html

She is so cute!