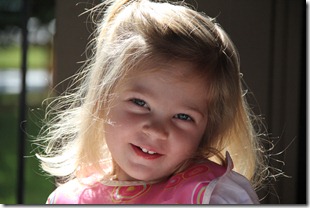 Abbie is at a really fun age right now.  She comes up with some of the craziest things to say, and she literally repeats everything you say.  If someone asks someone else a question, 9 times out of 10, she’ll repeat the question.  And she comes up with some pretty good questions on her own also.  She loves to make people laugh and she has a very inquisitive nature about her, as I suppose most 2 year olds do. 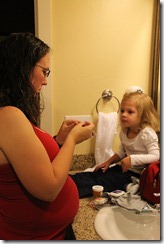 Abbie is definitely my little helper.  She’s loves to be involved in anything I’m doing and getting ready is almost impossible when she is around.  But she is just fascinated when she watches me get ready and does a running commentary of everything I do, with an occasional question thrown in here or there.  She’s recently started holding her markers the right way and she tries very hard to color within lines and usually does a pretty good job of it.  She can count to 14 fairly easily by herself and she's learning her colors.  She does better picking out colors you ask her to point to than naming them by herself. 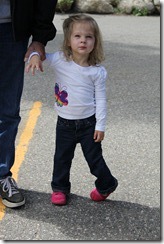 Abbie LOVES bugs.  If she sees a bug, she wants to pick it up, and she’s always bringing me live bugs to show me.  She’s not afraid of them at all.  My parents have little inch long millipedes all over outside their house and Abbie often likes to play with them.  I’ve given up trying to keep her away from them.  She is, however, a little bit afraid of butterflies.  Go figure.  Abbie also likes rocks.  She tries to pick up most rocks she sees, and usually I’ll let her pick one or two to carry around with her because it makes her very happy.  She also loves playing with her baby doll.  She likes to wrap it in blankets and feed it and put it to bed.  She often says “Babies crying” and you can ask her why and she’ll say because she’s sad.  So then she gives her hugs and kisses and rocks her.  It’s pretty cute to watch.  I definitely like having a little girl. 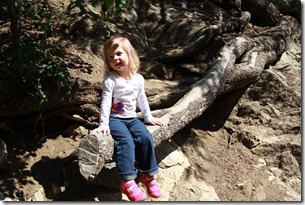 Stats:
Weight: right around 30lbs
Height: 37 inches
Clothes size:  2T’s usually, but she is wearing some 3T pants since she is so tall
Shoe size:  They range from 8 and some of them are 10’s, but usually she’ll fit into 9’s.
Diaper size:  5 during the day, 6 at night (Huggies)
Potty training:  I think I’m going to hold off on this for a while.  She’s going to go through some huge changes in the next few months with moving back to Italy, not being around my parents, Mark coming home, moving to a big girl bed and getting a baby brother.  I think she has enough on her plate at the moment.
Sleep schedule:  She’s been needing less sleep lately.  She goes to bed between 8:30-9pm and she’s almost always up by 8:30am.  But sometimes she lays in bed for a couple hours before she actually falls asleep.  I try to get her to nap between 2-4, but that doesn’t always happen and sometimes she doesn’t sleep the entire time she’s down for her nap.
Teeth:  She’s currently getting 4 of her 2 year molars.
Favorite foods:  She loves grapes, and broccoli.  She’s pretty good about eating most things you put in front of her, or at least trying them anyway.  She’ll spit them out if she doesn’t like them.
Favorite books:  She loves the “If you give a mouse a cookie” and “If you give a moose a muffin” right now.
Favorite activity:  Anything outside, especially if it involves water. 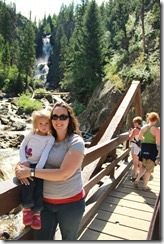 Abbie is just a joy to be around.  She’s a GREAT little traveler and her “2 year old moments” are usually few and far between.  She always wakes up in a good mood and she craves praise for doing things right.  It’s fun to see her get a big grin on her face when she knows she’s done something well.  I haven’t played up her having a brother much yet.  I’ll wait until Mark is home so we can talk to her about it together.  She knows there’s a baby in my tummy and that she’s getting a baby brother, but I don’t think she realizes what that means yet.
I just can’t believe how quickly Abbie seems to be growing up now.  I wish I could just keep her little forever.  She’s such a sweetheart.

Awesome post. Look at the belly! I can't believe it, so weird not being able to see it grow in person. Hope you are having a good time there! I'm starting to see more nickel wives around the bx/subway, they are all trickling back in :)