If you had told me.

If you had told me, 10 years ago, that in 5 years I’d marry the most amazing guy I’ve ever met, you would have gotten my hopes up.

If you had told me that he was going to be a fighter pilot, I would have laughed and said “Yeah right.”  And if/ when I actually believed you, I would have gotten pretty excited, because who doesn’t dream about what it would be like to marry someone in the military.  (Although, at times, it’s not quite the fairy tale I was envisioning, that’s for sure.)

If you had told me that within our first five years of marriage, we’d move 5 times, living in 3 different states and 2 countries, I would have prayed that we’d have a lot of help moving, and I would have been up for the adventure.  (And I still am!)

If you had told me that within our first four years of marriage we’d visit 14 different states and 10 different countries, I would have been ecstatic!  I LOVE to travel!

If you had told me that our first year of marriage would be a huge adjustment and learning experience, but that it’d just keep getting better and better after that, I probably wouldn’t have believed you because who really thinks that the “honeymoon” stage might be hard before it actually happens.  But the good thing is that it has kept getting better and better since then.

If you had told me, 10 years ago, that I would have an amazing 2 year old and be pregnant with #2 in 10 years, I would have said that wasn’t in my original plan.  I wanted to wait until I was 30 to have kids, but that all changed when I married Mark.  And if you’d told me that my husband would be the most involved, attentive, loving, perfect father to our child(ren), it still wouldn’t have “prepared” me for what I saw when our daughter was born.  I knew Mark would be an amazing father from the time I married him, but nothing could have shown me how amazing he truly is with Abbie until I saw him in action with her.  Every time I see him with her I fall in love with him a little more.

If you had told me that we’d be living in Italy by our 4th anniversary, I would have been thrilled, but again, probably wouldn’t have believed you.  I’d always dreamed of living overseas at some point, but I didn’t think it would really happen.

If you had told me that on our 5th anniversary we’d be separated by 7000 miles, with him being in a war zone and me living with my parents, I would have been pretty bummed.  Who wants to spend their anniversary apart?  And while I am still bummed, I am also exceedingly proud of my husband.  Words can’t describe what you feel when the most important person in your life, the one you share every part of yourself with, goes off to war.  There’s a lot of fear that that might be the last time you ever see him in person, but after you’re able to get that fear under control and push it aside, the main thing that’s left is pride.  A lot of pride.

If you had told me, 10 years ago, that in 3 years I’d meet this guy that I liked a lot and had tons of fun with, and that in 5 years I’d actually marry him, and that in 10 years I still wouldn’t believe the life that we have to together, the experiences we’ve shared and all the fun we’ve had, I would have hoped and prayed that you were right.  And you would have been.

Mark, you mean more to me than I can put into words.  Because of you, we have a life that I never could have even imagined.  You are absolutely everything I had hoped for plus much, much more and I love you more and more every day, even if you are on the other side of the world.  I can’t wait for you to get back so we can celebrate our anniversary (maybe in London??) a few months late.  I love you! 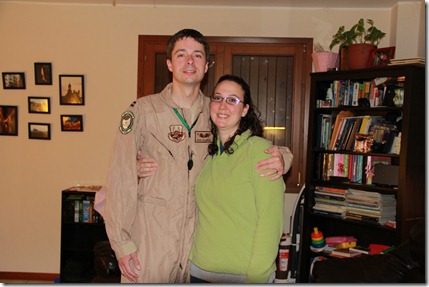 What a sweet post! It brought tears to my eyes. Beautifully written, and HAPPY ANNIVERSARY!

Happy Anniversary!! I know you guys will have fun celebrating when you are both back at home! <3 hugs!

That is beautiful!! Happy anniversary!!

Congrats and here's to spending the next one TOGETHER :)