Abbie and I had doctors appointments this week.  I had my 12 week OB appointment, which included my first ultrasound with this baby, and she had her 2 year well baby check up. 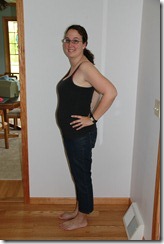 I was a nervous wreck for a week or two leading up to my appointment.  I’d had at least 2 ultrasounds by 12 weeks with Abbie’s pregnancy since that’s the way my OB in Oklahoma did things.  I didn’t really like waiting until 12 weeks to see if everything was okay with the PP (nickname for baby #2).  I felt really pregnant until about 10 weeks.  I was already showing a bunch, I had a bunch of “stretching” feelings, and my stomach was rock hard.  Around 11 weeks, I’d stopped feeling those little pregnancy twinges, I could completely suck my stomach in and I just didn’t feel pregnant.  So I was beyond nervous that this u/s was going to bring bad news.  Thank God, it didn’t. 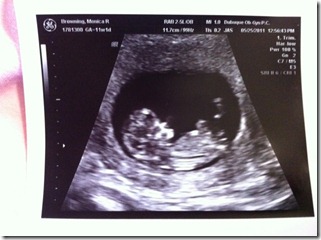 As soon as she turned the camera on, the PP started bucking around in there, kicking its legs and flailing it’s arms, so I was immediately relieved.  She printed out bunches of pictures for us, and even printed out duplicates so I could send Mark copies of them.  She gave me 3 of one of them, so I gave Abbie a copy of one, and she’s been hauling it around pointing to the baby saying “baby in mommy’s belly”.  Today she lifted up my shirt because she wanted to see the baby in my belly.  Haha!  She’s pretty cute.  She’s also saying “baby in Abbie’s belly”.  Let’s hope not! 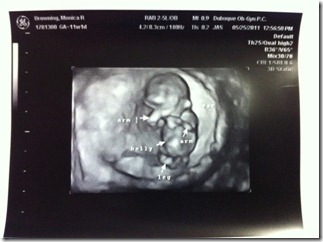 Anyway, everything looked fine.  It’s heart rate was 171bpm, which she said was good.  My next appointment is in 4 weeks, and my next ultrasound is at 20 weeks.
Today Abbie had her 2 year appointment.  She’s 29.6lbs (80%), just over 36” long (over 90%) and her head circumference was 45cm (75%).  So she’s rather large for her age, but she always has been.  They asked if she was still using a bottle and I told them she was and they didn’t even say anything about it, which surprised me.  I’m not concerned about her using a bottle, because I know it’s her comfort item, but I thought they might be.  She uses a normal cup just fine, but she still likes her bottles of milk at times.  One of the questions I had to answer was if she was saying at least 50 words.  I had to laugh a little because my little motor mouth says at least 500 words.  Her favorite sentence right now is “I want just a little bit more.”
Now that our appointments are over, I know I’m a little more relaxed.  I definitely slept better last night than I have in a long time, but that might have been attributed to the fact that it was actually cool, so I wasn’t roasting to death.  =) 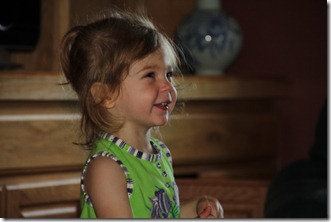 I'm glad everything is okay! I'd have likely freaked out, too. (I don't remember at what point I had my first ultrasound, but I did hear the heartbeat pretty early on.) My nephew, when I was pregnant with my older son, would often lift my shirt to try and see the baby cousin and give it kisses! LOL (He was 2 at the time.) It sounds like Abbie is very excited about the impending arrival of a younger sibling! She's going to be a great big sister!

Yay! That is so funny about the 50 word thing. Lindin's 18mo check up is on the 6th and one of the questions is if she can say 50 words! She definitely cannot! Could Abbie say 50 words at 18 months?