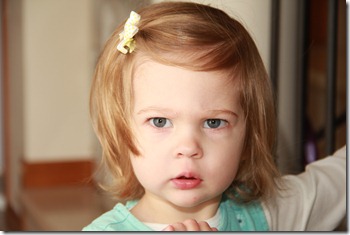 We’ve been seeing this face from her a lot lately…  To say Abbie has been a handful since we’ve been back from Barcelona would be a huge understatement.  I hope to GOD that she just doesn’t feel good, which is causing her to act out.  If this is the beginning of the terrible two’s, I’m going to cry because I’m not sure I can take much more of her like this. 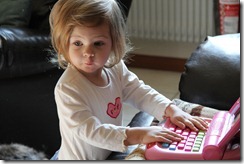 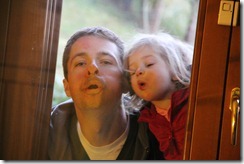 I took Abbie to the doctor on Friday.  Her temp was up to 104.4 on Thursday night, so I called the nurse advice line and the nurse (in the States) patched me through to the doctor on call (in Italy).  I find it kinda funny that you have to call someone in the States to get ahold of someone in Italy, but whatever.  The doctor wasn’t too concerned about her temp.  He said if it gets upwards of 106, that’s when you start to worry about brain damage, but 104-105 range is okay.  He was really nonchalant about all of it, and I wasn’t really all that worried about it in the first place since Abbie was still acting fine.  I mean I could obviously tell she wasn’t 100%, but she was still active and not even close the lethargic.  I chatted with Brittney online and she was pretty worried about Abbie, so I called first thing Friday morning to get her an appointment.  Brittney went with us to Abbie’s appointment and Abbie did SO well for the doctor.  She didn’t freak out once when they put that finger thingy on to take her pulse, and she let them take her temp without any problems.  And she let the doctor look in both of her ears and even opened her mouth for him.  I was shocked.  Usually she flips out and screams and cries when they just try to listen to her heart, let alone anything else.  He said she had a very slight ear infection in one ear and to hold off on giving her amoxicillin if I could, but with as crabby as she was (and is) I knew she was in pain so I started her on it yesterday morning.  Hopefully she starts feeling better soon. 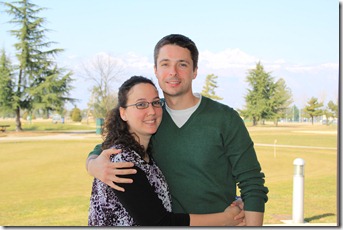 I haven’t been feeling the best either.  I’m definitely getting better, but I have a lot of sinus pain and my ears are still bugging me quite a bit.  They just pop for no reason at all, or any time I blow my nose, which is frequently.  It’s annoying and I’m just praying that I’m completely better by the time I have to fly back to the States.

(Our crazy woozer doing her normal runs around the yard.) 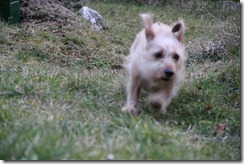 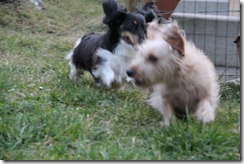 I get more excited about going back to the States daily.  I miss the U.S.  I’m ready for a break from Italy and to get back to what I know and what I’m used to.  The past few weeks have been tough here.  I feel so disconnected from Mark, like we’re living 2 separate lives under the same roof.  I guess he’s usually not home anyway so it’s not really even under the same roof.  Usually we have a great connection, but lately it’s been lacking.  I was warned that this would happen, that he’d be here, but his head really wouldn’t be.  I don’t feel as though we’re having marital problems or anything that serious, it’s just sometimes I feel more connected to him than others.  I think we’re both just thinking about the future and what it holds for us on our separate paths during his deployment.  I’m just ready to get on with this so we can get it over with.

Anyway, hope you all have a great weekend.  On Monday I’ll be doing my second giveaway, so be sure to check back! 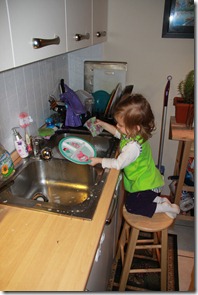 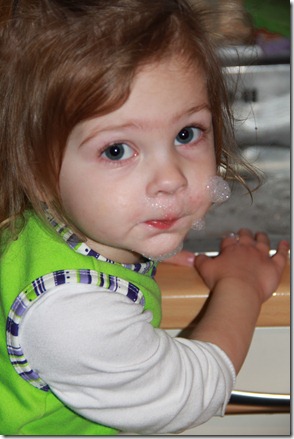 I hope both you and Abbie feel alot better soon! Sinus stuff sucks, it just makes u miserable! And i know i've said it before but i can't wait til u are back in the states as well!

I know every kid is different but if it makes you feel better to know, Ellie has her "terrible two moments" sometimes. Luckily it is not a constant issue. :)
Hope you all feel better soon! :)