Sorry for the pause in my blogging.  Abbie and I were getting ready for Mark to get home, and enjoying our time together since he’s been home. 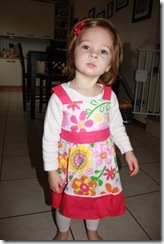 Abbie and I got all dressed up to go to the squadron to welcome Mark home.  This time we actually got to take a bus out to the jet to greet him when he got out of it.  It was a first for us and we were pretty darn excited about it.  (I didn’t take any pictures out there because cameras aren’t allowed on the flight line and I was too excited to take pictures anyway.)

We got there after Mark was already out of the jet and getting his stuff together.  I was a little worried that Abbie would be hesitant towards Mark, but she wasn’t at ALL.  She started pointing at him as soon as she saw him and immediately held up her arms for him to pick her up.  And she’s pretty much been glued to his side since then.

We rode the bus back to the squadron with Mark and then he had to go in a back room to get out of all of his gear that he flies in.  Abbie completely lost it when he went in that room.  (There were other guys getting changed too so we couldn’t go back there with him.)  She had huge alligator tears coming out and was crying “daddy” over and over and pointing at the door and trying to get in it.  Ugh.  Thank GOD she hasn’t done that yet when he’s left or I’d be right there crying with her!  But she made it very clear that she missed him a bunch and wasn’t about to let him get away from her again.  It was really cute and after he came out she was all smiles again. 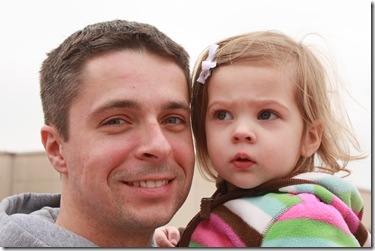 The next day we took Abbie to a park on base and let her run around some.  She had fun playing with her daddy and I had fun taking pictures of them.  I’ve been hearing a lot of “Come on daddy” and “play daddy?” from her since he’s been home.  He, of course, can’t believe how much she’s changed.  He said she just doesn’t seem like a baby at all anymore.  She’s taller, she talks a TON more, she understand pretty much everything you say, she’s running and jumping now, etc.  Abbie and I had washed the car before we went to pick up Mark and as soon as we got in the car Abbie said “Help mommy wash car”.  He was pretty surprised. 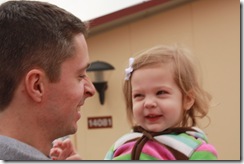 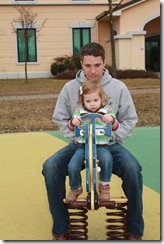 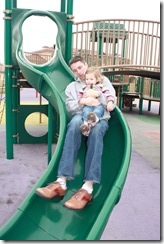 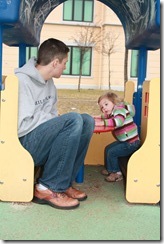 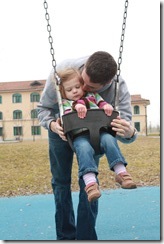 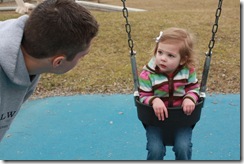 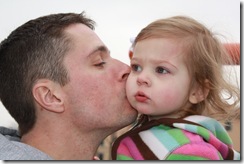 The homecomings definitely make these longer TDY’s almost worth it.  Abbie and I were perfectly fine while Mark was gone.  We had our routine down and we went on with life, but it’s just different.  There’s just the constant void that no one but Mark can fill in either of our lives.  I find myself sighing huge sighs of relief now that he’s home, and I think I’m more tired now than he’s here than when he was gone, just because I feel like I can finally let my guard down.  It’s so nice to be part of a team instead of holding down the fort by myself. 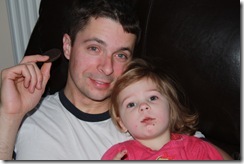 Love it :) She is growing up so fast, turning into a such a little girl. So glad you are all reunited!

I. So. Relate. To the kids' separation anxiety after the husband comes home, to the exhaustion and relaxing once it's allowable, to the void of the man of the house being gone, to the "keeping with the routine" routine...I've been there. More than once. And with being married to the military, I know I'll be doing it again! lol I'm glad that he's back safely with you two and that you are all enjoying the little moments together!