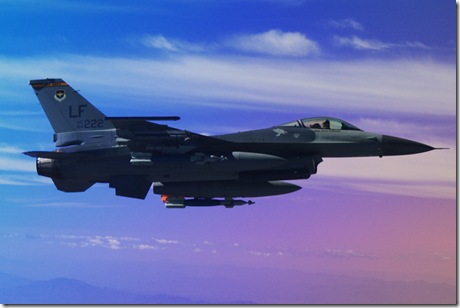 If you’re at all exposed to the pilot community, you’ve probably heard the joke Q. What’s the difference between God and a fighter pilot?  A.  God doesn’t think he’s a fighter pilot.  Admittedly, I chuckled a little when I first heard it.  But I think this joke represents the general stereotype that is given to pilots, particularly fighter pilots.

One of my best friends here is not part of our squadron.  A few weeks ago, she put something on her FB status about how her husband left at 5:30am and still wasn’t home around 8:30pm and I commented on it about how it sounds like a pilot’s schedule.  One of the guys from her husband’s squadron responded to my comment and said something like “Yeah right.  If he was a pilot he’d be home by 6pm every night and deploy for 45 days at a time.”  I had about a million smart ass responses come to mind as soon as I read that, but instead I just said “You and I must know very different pilots.” 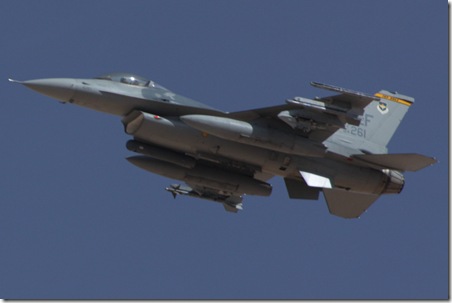 I’ve talked to my friends husband before about the reputation fighter pilots have here, and really, it’s not good.  I asked him if his guys (he runs a squadron on base here at Aviano) would want a ride in an F-16 given the chance and he said that they’d probably turn it down, just to spite the pilots.  Honestly, I was shocked by that, and by that comment one of his guys made on that FB status. 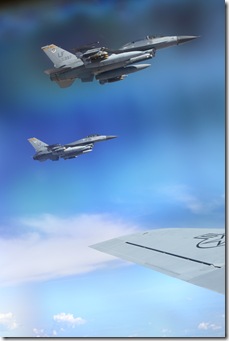 Mark said a while ago he was talking to one of the maintainers and the kid was like “So, do you guys work on Friday’s usually?  Or do you just come in, fly and then go home?”  Mark said he laughed a little bit and tried to explain to the guy a little of what he does, besides fly.

It seems as though most people think that fighter pilots are a bunch of macho jerks, that think they’re better than everyone else.  And granted, I have come across a few of those in the 2 years I’ve been part of the F-16 community.  But it’s too bad that a VERY select few guys give then entire group such a bad rap.  A while ago I read on a blog written by a fighter pilot’s wife, about how her husband was part of an elite group of people, yadda yadda…  I just cringe when I read stuff like that because that kind of stuff gives us all a bad rap and it did come off sounding like she thought her husband was better than everyone else. 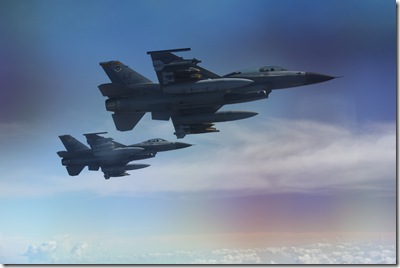 So in an attempt to clear up the apparent misconceptions, here are my 2 cents.  MOST pilots are really nice guys (and girls).  I can honestly say that this group of people we have the privilege of being part of the squadron with here, is the best we’ve encountered.  The majority of the guys here have families and kids, and the squadron as a whole is very family-oriented, which isn’t always the case.  (More on that later.)

Pilots obviously fly jets, but most of them also have full-time jobs in the squadron that they also have to keep up on.  They spend hours preparing for one flight, then they brief it, fly it, and de-brief it, and depending on what type of flight they flew, all of that alone can take 8+ hours, and then they have to do their other job before or after they fly.  A typical day for a fighter pilot lasts anywhere from 10-14 hours at work, 5 days a week.  Often guys go in on the weekend to catch up on things they didn’t have time to do during the week or to get a head start on studying for the next week.  A 60-hour work week is probably on the low end of average for them.  There have been many days where Mark is at work long before Abbie gets up and he gets home long after she goes to bed.  And as much as I would LOVE them to deploy for 45 days at a time, that isn’t the case.  It is much, MUCH longer than that. 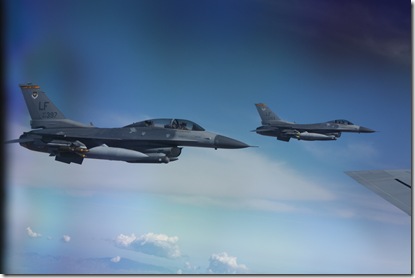 *I took all of these pictures on the spouse tanker ride in Nov 2009.*

So TRUE! I know when they get to fly about 1-3 times a week it's cool and all, but I personally would NEVER be a fighter pilot! Too much studying, work, stress, and physical strain on your body. If Tyler goes into work for an 8-9 hour day I am seriuosly SHOCKED when he gets home and frequently comment, "It must be my birthday!" I swear, people always say how much an officer makes salary-wise but since our pilot hubbies put in 60+ hour work weeks, if you broke down their pay to an hourly wage it's pretty meager for their education, training, and just how much effort/care they put into their work. But...in the end they do love their job so I'm happy they're happy! Thanks, Monica, for writing a blog with truth about such a common misperception.

Sorry it's still bothering you. It would bother me too. I seriously think a lot of it stems from jealously, though they would NEVER admit that. I know Dan wanted to be a pilot in the USAF when we were in high school, I'm sure he's a little jealous too, again, don't think he would admit it. He loves what he does though, so it all worked out. Out of all the people I have met here linked to the FP community have been super, super nice. A lot more welcoming than people/spouses from Dan's shop! That says a lot! I think that out of everything out there opportunity wise, there is always someone there to give it a bad reputation. You, along with many others, know your husband is a wonderful guy, don't let other peoples comments get you down. FP do seem to have it the worst out of everyone in the USAF, but like I said, I think a lot of it stems from jealousy. They do a very awesome thing for a living. They SHOULD be jealous ;)

My fiance (Air Force) isn't a pilot but my best friend from high school is a pilot in the Navy and her schedule is so insane we're not even sure if she's going to be able to come to my wedding. Lots of people have made snarky comments about how she should just fly herself there. I know she works her ass off w/ the kind of days you're talking about because we hardly get to talk except for text anymore. Pilots really are awesome people w/ an awesome job but it does come with some serious sacrifices!

I must admit, I'm not a huge fan of pilots but I think that comes from growing up in Enid. You get to deal with the real cocky guys and that tends to give all pilots a bad rap. Then I met you and Mark and he pleasantly surprised me. It was nice to meet a NICE pilot who wasn't like "Oh look! I'm a pilot". Andrew even commented on how different Mark was from the other pilots we've encountered. I know, from reading your blog, that being a pilot isn't all that everyone thinks that it is. So, I just want to say thank you for changing mine and Andrew's minds on pilots...because we know there's at least one good one out there! ;) Take care!

I'm gonna say it. You guys are one of the FEW people in the fighter community that are kind, family oriented and really nice to people OUTSIDE of that community. By outside the community, I mean how they act and treat the heavy guys. It's not everyone, but you'd be shocked I think...

But I totally understand where you come from about pilots doing a LOT more than fly. J is a scheduler right now...so even on the rare occassion that is at home, he works 8-10 hour days. Yucky!!

This is very interesting to read since I have no idea how the whole thing works. I have no idea how many fighter pilots there are or where they go after that position or what not. But I can't say I am surprised to read these comments about Monica and Mark being gracious and kind. :)I am glad you guys help give a good name to that job!

To be honest...I have never, to my knowledge, actually met a pilot. I have no opinion formed about any pilot, either! The funny thing is, when I tell civilians that my husband is in the Air Force, nearly every single person says, "Does he fly planes?" LOL

That would be a sour comment to read by anyone who's spouses career field is under attack.

Every career field has their pro's and con's. I think can safely assume that your friends s/o is possibly something on the actual flight line assuming by the sour undertone to their response comment. It's sad to say but there is a sour/negative light on the pilots here for many reason's, I would say ask a maintainer why but it would be like biting in to a lime, very sour.

Shake it off and know your truth which is...it's not really that way.

I loved reading this, only because I like hearing about other positions within the AF. At the base where we are now, they do test rides for f-15s and I LOVE watching them fly around. My husband works on the flight line, so I get to see them pretty often, and I can't wait to see more of them at Aviano.

I've never heard a stereotype about pilots, but I'm glad you posted this so I can know that it's not all true (when I inevitably do hear people talking).

and can I just say that I LOVE the photos on this post? How freaking cool that you got to go on a ride in one. After seeing the way those take off, I think I would literally pee my pants. Very cool!