I am WAY behind on my blogging!  I only have 8 posts so far this month, and that is by FAR the least amount of blogging I’ve done any month this year!  We’ve just been so busy that I feel like I’m just trying to keep my head above water between all these trips this month!  But I’ll have plenty of time in January and February to catch up with my blogging.

Right now I’m cleaning like crazy trying to get ready for Mark’s family to show up in 2 days.  (Okay, not RIGHT now, but I was before I sat down to write this and I’m going to get back at it afterwards.)  I have TONS of stuff I want to bake and I have a day and a half to get it all done.  We’ll see if I accomplish it.  Luckily Mark’s brother is a chef so anything I don’t get done, I’m sure he’ll be willing to help me and since he’s a pro, that would be nice.  =)

As of yesterday I’ve discovered it’s not a good idea to leave Abbie alone for any period of time…  I used to be able to be able to let her play in the living room and run down and put a load of laundry in or go upstairs and make our bed or whatever.  However, yesterday I ran downstairs for MAYBE 5 minutes and came up and she’s sitting at our kitchen table on one of our pub height chairs with my iPhone in her hands…  There was a candle and a small laptop right in front of her also.  Yikes!  We have ceramic tile floors so if she falls off of one of those chairs (or drops something from them), it’s not going to be good.  A little while later I was doing the dishes (in the same room as she was) and I turn around and she’s sitting on top of the dog’s crate with her stuffed puppy and sippy cup.  Oh boy…  A few minutes later I turned around and she’s standing on a tiny table we have next to our couch.  What the heck!!!  Apparently she’s turning into part monkey all of a sudden because she’s never climbed on anything before. 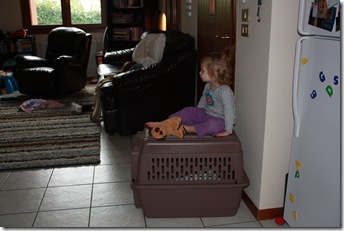 Here are the jet photos that were taken back at the beginning of November.  (Sorry they’re so late.)  It would have been great if Mark had been able to be there, but such is the military life I suppose.  I’m happy with the way they turned out, even if he wasn’t with us.  We joked with one of his co-workers who escorted us out to the jet that he could be Mark’s stand-in and then we could just Photoshop Mark’s face on his.  =)  But here are Abbie and me with the mighty F-16.

(She wanted to push every button she saw, and there were a ton of them…) 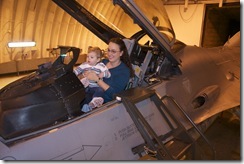 (One of my favorites.) 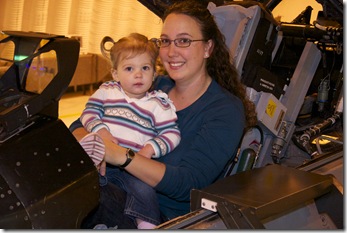 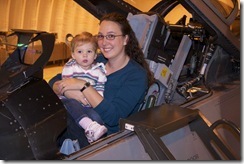 (Almost got her to smile!) 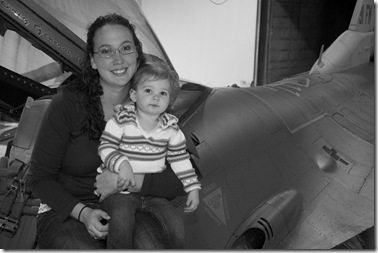 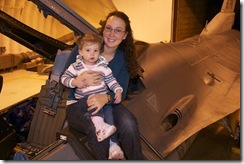 (I asked Luc to do this picture with the jet in the background, and they would have been really cute if Abbie hadn’t been SUPER squirmy.  Instead we kind of look like a circus act, but oh well.) 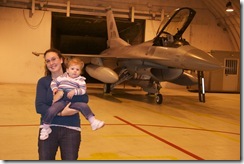 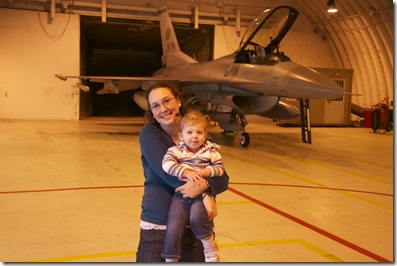 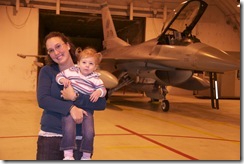 Thanks so much to Luc G. for taking these for us!  Hopefully next time Mark will be around to join us!

I LOVE the black and white one of you two!