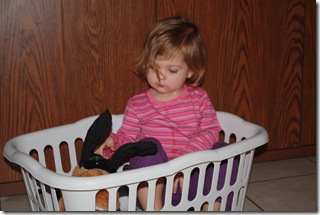 I don’t even know how many words Abbie knows now.  If I had to guess it’d probably be 200-300 at least.  She’s to the point where she pretty much repeats anything you say, up to 3-4 words at a time.  It makes it a lot easier to care for her because she pretty much asks for anything she wants.  Last week, I was smacking the fly swatter on the ground, mainly trying to get the dogs out of my way while Abbie was eating in her high chair.  Obviously she was watching me with rapt attention.  She ate for 10-15 mins longer and I got her down and went and sat on the couch with her.  She was VERY adamant about something, but I had NO clue what she wanted.  She kept saying “more” and “blue” and was pointing towards our kitchen cabinets and was trying to get me to stand up and push me towards them.  She finally pulled/pushed me over towards the cabinet and was pointing up saying “blue” and I still had absolutely no clue what she wanted so I picked her up and asked her to show me, and she finally got me around to where she could grab the fly swatter.  Ha!  Of course I didn’t let her have it though because she would have beat the crap out of the dogs with it.  =) 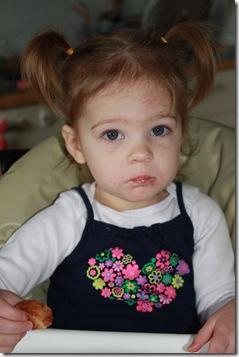 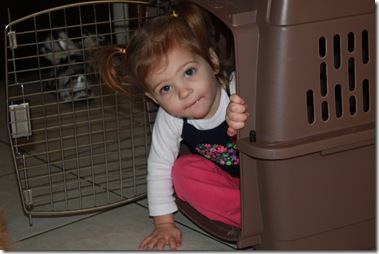 As I stated in my previous post, she’s a little climber now, which is a new thing.  It’ll take some getting used to, that’s for sure.  And she always wants to “keen”.  (Clean.)  The other day she had a sippy of milk and some of it spilled on my shirt while she was sitting on my lap and she pointed at it and said “dirty”.  Then she went and grabbed a wipe and came back and wiped my shirt off for me while saying “keen it”.  It’s funny to hear her pronounce things.  Christmas trees are still “papagees” and Merry Christmas sounds more like “Merry kissmiss”.  Sometimes she adds an extra syllable or two. 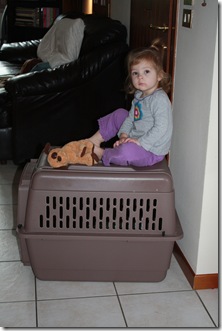 I’ve always wondered what she’d be like at this stage.  When she can talk, but is still learning and still figuring things out.  She is so much fun and I love it when she looks at us with that questioning look on her face.  I love the way she really studies you when you explain things to her and how serious she is when she’s trying to figure things out.  This is most definitely one of her easier stages, despite her having a very strong will at times.  I don’t think that’s going to go away any time soon, so we’re learning to work with her.  She loves to give big hugs and kisses now and she goes racing to Mark when he gets home from work.  She laughs very easily and is always busy doing something.  She really is a sweet, caring little girl, she just has a little spit-fire side to her too, which I think is kinda fun.  Sometimes.  She definitely has a lot of personality for such a little person. 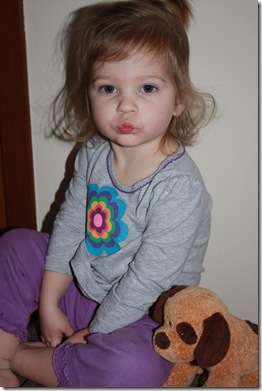 The part that amazes me is when she knows you are coming to my apt to pick me up and knows to say "Bea's" the minutes we are driving past the toad she lives on...10 minutes away! It's amazing. Smart little girl :) I hope when I have kids, they will be as smart as her!