This weekend, we went up to Kirchdorf, Austria for our squadron ski trip/ Christmas party.  I was nervous because there was a lot of snow predicted in the forecast and our car doesn’t have winter tires, but luckily we only hit a little bit of snow on the way up, and nothing that required our snow chains.  (Although it was a bit scary because we went in one end of a tunnel through a mountain and the roads were fine and we came out the other end and there was an inch or 2 of snow on the ground!) 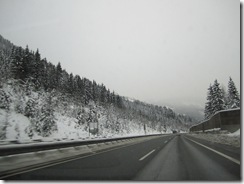 The drive up was beautiful and definitely put us in the Christmas spirit.  I always see pictures of these trees in books and on cards, but I’d never seen them up close and personal, let alone an entire mountain range full of them!  It was absolutely beautiful and these pictures don’t do it any justice. 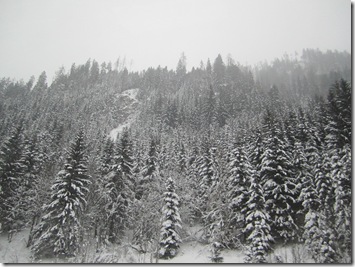 Because our squadron has SO many kids, our commander’s wife made sure to get an extra family-friendly place, and wow!  This place was AMAZING.  They had a crib all set up in the room for us when we got there, along with a changing pad and a baby bath tub.  They had a HUGE kids club area, with one 2 story room that was like those huge McDonald’s play houses.  The entire thing was filled with a 3-4 story jungle gym.  And they had a baby play room with balls and little tents and play kitchens and things to ride on.  And then had a kid’s dining room and you could just drop your kids off and they’d feed them and let you know when they were done.  And they’d also arranged for babysitters at night during our parties.  I would LOVE to go back and spend more time here.  It was absolutely fantastic. 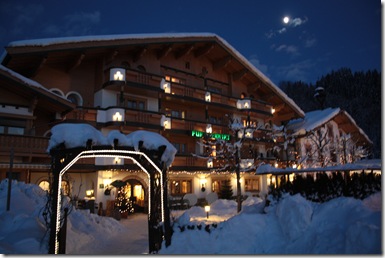 This old guy was the hotel mascot.  He was always laying somewhere in the entry way or by the fire.  He really made me miss having a big dog around.  I just love them to death.  I was very tempted to take him home with me but I figured someone would miss him too much.  (Oh, and this hotel was pet-friendly also.) 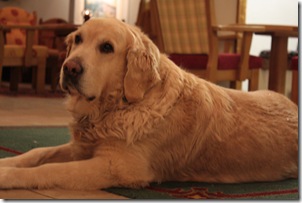 Here’s our room.  I was nervous about Abbie sleeping the same room as us because in Switzerland a few months ago, that didn’t work out too well, but she did great!  Our neighbors kept me awake WAY more than Abbie did.  She slept like a champ, although she was up at 7:45am both days, which is an hour or 2 early for her.  But that’s okay since we needed to get up and get going anyway. 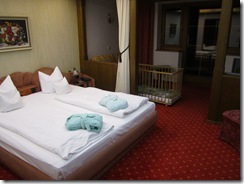 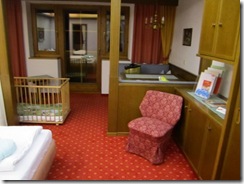 The first night everyone got together for dinner and we wore our “germanwear”.  It was fun to be able to wear it again, although that dirndl is TIGHT and I don’t like clothes that tight.  But it didn’t stop me from having fun. 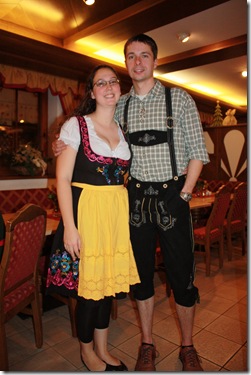 Saturday Mark and I went skiing.  Well kinda.  I skied and Mark kinda skied.  We went to Fieberbrunn and the views were breathtaking, even from the lower slopes where we spent all our time.  Here’s the bunny hill. 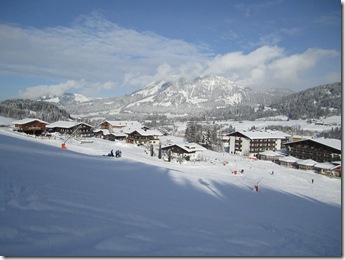 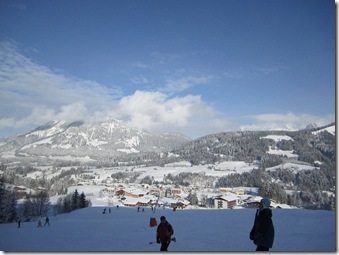 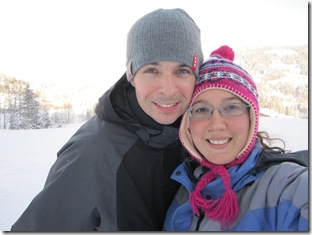 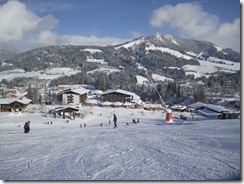 Here’s Mark actually skiing!  It was only his 2nd time and he did really well considering he hasn’t had much practice.  He got really frustrated on his first trip down the bunny hill since he fell about 40 times, but he didn’t fall once his 2nd time down!  He said he taught the locals a few “colorful phrases”, which could be true.  We went down the bunny hill about 4-5 times and then I wanted to try the “big” bunny hill.  That didn’t go so well for Mark so unfortunately that was our last trip down any hill.  I could have skied all day, but I didn’t want to leave Mark, so I quit too.  Maybe next year I’ll get to go down the hill more than 5 times. 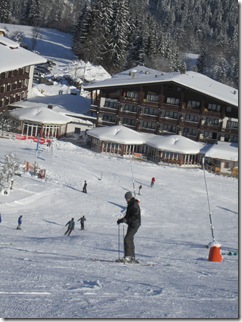 These are taking from the top of the “big” bunny hill we did.  And actually you could go up 2 more ski lifts to get to the top of the mountain, but there was no way in hell I was going to talk Mark into that, so this is as high as we went. 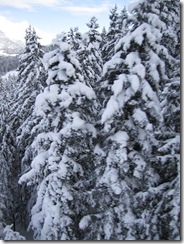 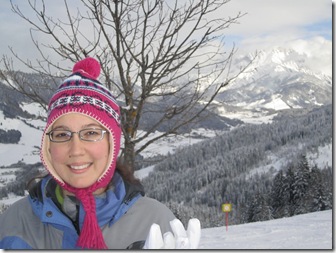 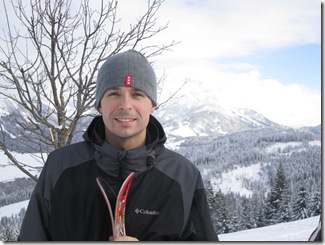 After our 3 hours of skiing, we came home and got Abbie from the daycare, where she was having a blast.  It took us a while to get her down for a nap, but she finally settled down and slept for over an hour.  Then we got her up, bundled her up and took her out to play in the snow.  We also signed up for a sleigh ride. 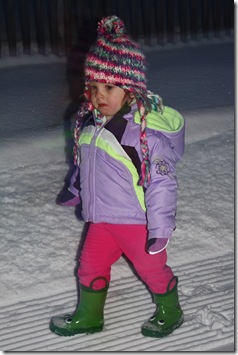 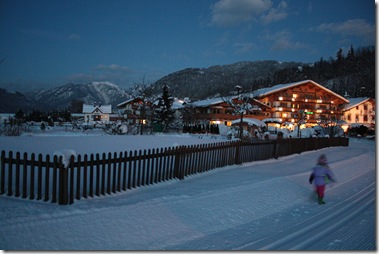 Here are the steaming horses before our sleigh ride.  Abbie was most interested in them and kept saying “horth!” the entire time we were on the sleigh ride.  It was FREEZING cold, but they had the seats lined in fur and gave us big fur blankets to cover up with, so despite it being very cold, we had a lot of fun. 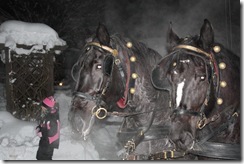 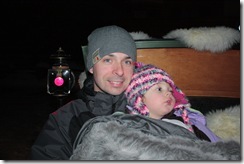 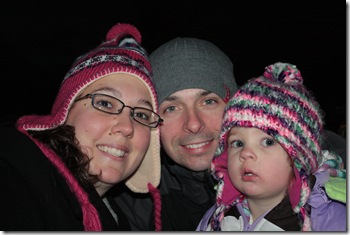 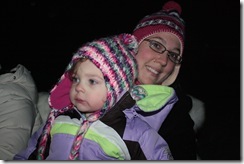 After we got back from the hour long sleigh ride, we got Abbie settled in with the babysitter (same one she had the night before) and headed down to our squadron Christmas party.  The hotel had a buffet style restaurant in it, and all our breakfasts and dinners were included in the cost of the room.  They had really good food and lots of options. 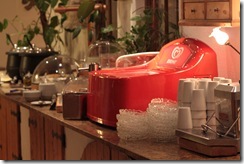 (This dress was at least 2 sizes too big for me, but the one I wanted to wear was like 4 sizes too big so I had to make due with this one.  But that’s why the top is so floppy…  Oops.) 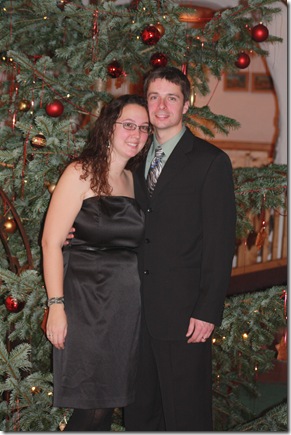 The squadron Christmas party was great.  They did a round of combat gift exchange which was highly entertaining to watch, and it was a lot of fun to hang out with everyone from our squadron.  We’re really lucky to be over here with such a great group of people.  (I took a TON of pictures and I’ll put them all on FB soon.)

Sunday we left the hotel around 10am to head to the Christmas markets in Salzburg.  (I’ll do a separate post about those.)  Here are some pictures from our drive to Salzburg.  Austria is BEAUTIFUL in the winter and we feel really lucky to be able to go to all these neat places. 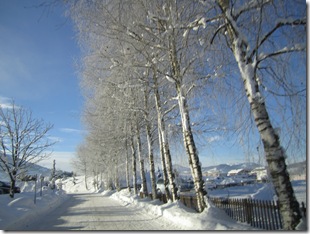 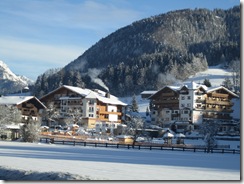 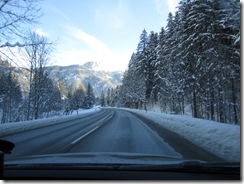 When we headed up, it was the same thing. We went through a tunnel and I even said, "I have a feeling when we come out of this tunnel we there will be snow on the ground." And Q said, "I don't think so because we are going down in elevation." It was a longer tunnel and we came out and sure enough, lots of snow. It had just started that day though and was coming down pretty good, the roads weren't the best. We got off to get gas and the exit roads were so bad. The highway wasn't the best either, had lots of slush all over it. Not too many people had been driving on it, so it wasn't very clear, finally we got to where snow plows had been.