After Abbie and Mark’s nap on Friday we headed to downtown Amsterdam again.  I wanted to see what the red light district was like at night, so we headed that direction again.  I just cannot get over how beautiful this city is. 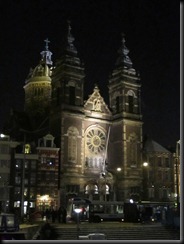 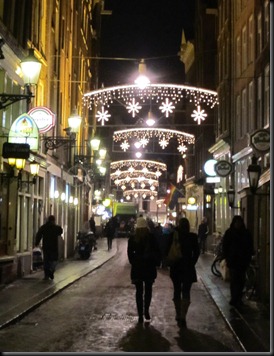 So the Red Light District….  I’ve never seen anything like it in my life, obviously.  I thought it was called the Red Light District because prostitutes supposedly hang out by stoplights, but it actually does have red lights in all the windows.  The girls stand in these windows lit up with red lights and some of them have black lights in them too and the girls wear white so it looks like it glows in the dark.  I thought there’d be a few girls around, but there are a LOT of them.  The one street we walked on probably had 20 places with 2-3 girls standing in windows each, and there are at least a couple streets.  They stand or sit in these windows scantily clad, usually talking on their cell phones or dancing or something.  It’s shocking to say the least.  Not so much the girls in general, but just that that many people are willing to sell themselves like that and that that many people use these girls to keep them all in business.  I obviously can’t fathom having that little self respect that you sell yourself, but apparently lots of people do it.  It was shocking and eye opening for sure.  And it was funny to watch the guys walk around looking at the girls.  Most people were just walking around in groups not really specifically paying attention to the girls, but there were a few guys who were definitely shopping, but oddly, most of them were on the opposite side of the canal of the girls they were looking at.  We saw one girl and guy bargaining as we walked by.  She was behind the glass door, asking him what he’d pay and he was outside saying something about $50…  Oh, and you could sometimes see little tiny rooms with beds in them behind the girls little window cubicles.  Thank God Abbie isn’t any older, or we never could have walked through there.  I don’t even think she noticed the girls since she was much more interested in the ducks and swans swimming in the canals.  Oh yeah, there are TONS of sex and porn shops, and we saw one place that was just selling marijuana.  It was a glass fronted building with lots of pictures of plants with descriptions taped to the windows and inside was just a counter and a guy on a computer.  And there were a few “shows”, some of them advertising things I couldn’t even fathom… 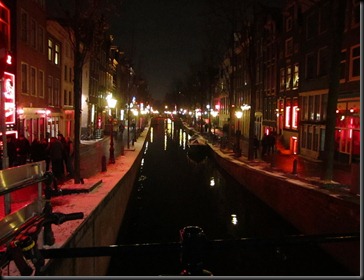 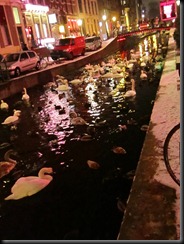 So the Red Light District is pretty confined to just one area, and besides that one part of Amsterdam, I absolutely LOVE this city.  I would move here in a heartbeat if given the chance.  The people are very friendly here.  You can walk by people and they’ll actually smile and say hi to you.  That doesn’t happen in Italy.  The shopping is AMAZING and reasonably priced, unlike Italy and there are TONS of different types of food here, again, unlike Italy, which pretty much only offered pizza and pasta.  We’ve had chinese food twice since we’ve been here.

Most Dutch people don’t wear these clogs anymore, unless they’re working in their gardens, but they were worn by factory workers back in the day.  Now they’re just mainly used as souvenirs. 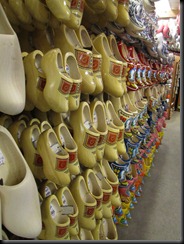 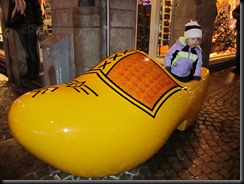 (Abbie and I ate the Chinese restaurant.  It was really good!!) 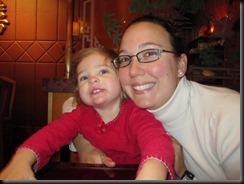 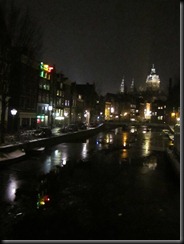 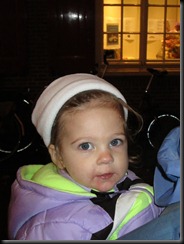 Saturday morning we headed out around 10am again, despite the fact that it was snowing and windy.  We wanted to find a bagel shop, since again, those aren’t to be found in our part of Italy anywhere. 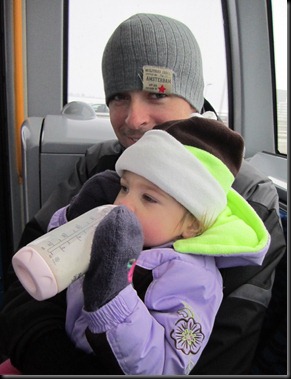 It was snowing to beat the band when we got down by the bagel shop, but we weren’t deterred!  You can kind of see the flea market behind us in this picture.  We bought Abbie this really cute handmade sweater jacket for 20E and Mark wanted to get her a tank top too, for 8E.  They had lots of jackets of all types, mainly ones that had a fleece lining and a knitted wool outer part.  They seemed really warm, but they were 40E so we didn’t get any. 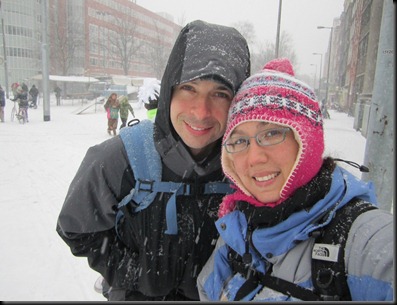 We wandered through the streets and neighborhoods of the southern part of central Amsterdam and even though it was cold and the snow was getting deep and our feet were freezing, we loved it!  It was just beautiful! 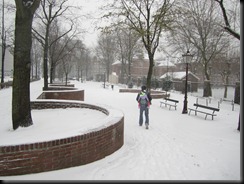 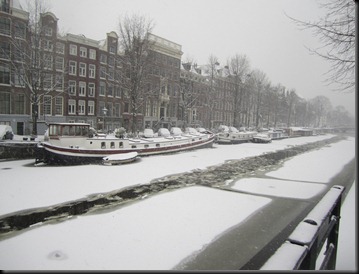 This is the most famous swing bridge in Amsterdam.  The legend is that two sisters lived on either side of this canal and they were tired of walking so far to visit each other so they built the bridge.  Obviously since then it’s been redone, and it was beautiful. 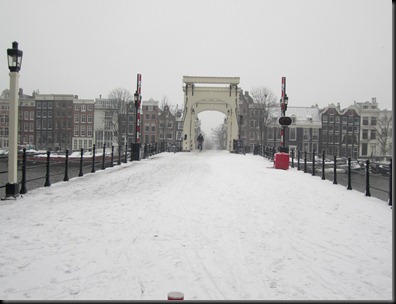 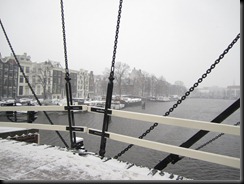 The public transportation system here is great.  The tram system is SUPER easy to figure out and we never wait more than 8 mins for a train.  But the bikes just amaze me.  There are bike lanes ALL over this city and some people have these wheelbarrow looking bikes.  There’s basically a wheelbarrow built on to the front of the bike and some people put kids in there or groceries or pets or whatever else. 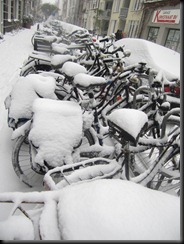 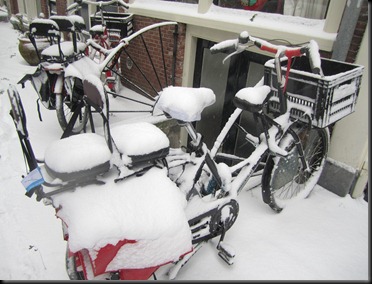 This is the mansion area in Amsterdam.  These row houses were much wider than most of the others.  Some guy saw us taking our picture and he offered to take our picture for us.  Again, that would NEVER happen in Italy.  And we returned the favor and took a picture of the 4 of them. 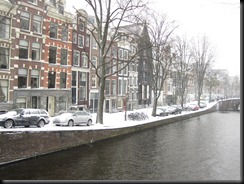 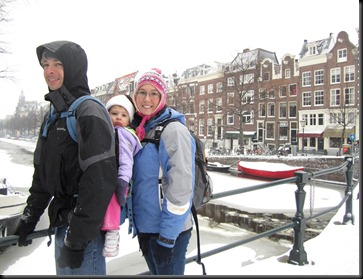 We wandered through one of the many shopping areas of the city.  I really want to find a pair of brown boots, since I already ordered my black ones.  I’d like them to be medium height and preferably lace up with good traction, that I could wear under my normal jeans.  We found some at a store that were only 99E, which isn’t bad for a decent pair of boots.  I’m hoping we can look some more tonight.  Mark really wants to get pancakes at one of the many places that offer them here (since we can’t get those anywhere in Italy). 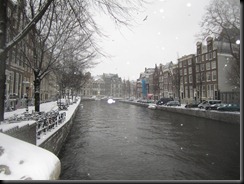 Next we went to the famous flower market.  It was AMAZING!  They primarily sell tulips, but they also sell HUGE bulbs to many different flowers too.  I wanted to buy some very badly, but they said you had to plant them this year, and I won’t be around this year to take care of them, so I’m hoping we can come back later to get some.  Besides, I’d love to come back in the summer and see all the tulips in full bloom!  This picture below wasn’t even half of this store, and there were at least 10 of these stores along the canal.  This is the largest floating flower market in the world. 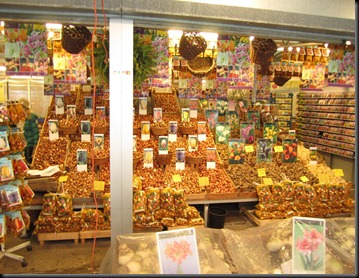 (These are the backs of the flower market stores on the left side of the canal.) 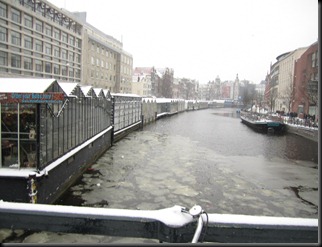 Now I’m going to fix us some food so we can head out again!  I can’t get enough of Amsterdam!!  I love it!