My friend Brittany has been in town since Thursday.  It's her first time in Italy (and Europe) so it's been fun showing her around.

Yesterday we went to Nove to the ceramics festival.  I had ordered Christmas presents for a few people last time I was in Nove (about 1.5 hours away) and was told to come back Sept 4th, which was yesterday.  But sure enough, the place wasn't open, so now I have to drive all the way back there again to pick up that stuff.  Damn Italians.

Today we went to Venice.  It was both Mark and my 3rd time there and Brittany's 1st.  They had the regatta going on, which we thought would be neat to see, but it was hard to see anything really.  It took place on the Grand Canal, but there are only a few places where you can actually see the Grand Canal, so of course, those places were packed.  I got a few pictures though, so I was happy.  It was basically a parade on the water. 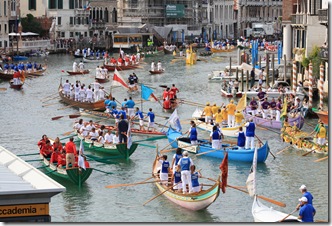 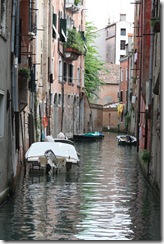 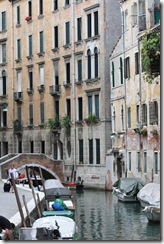 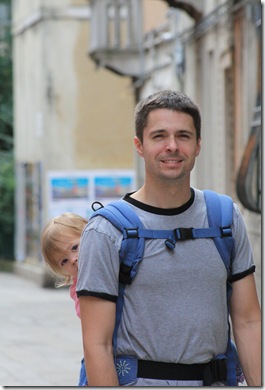 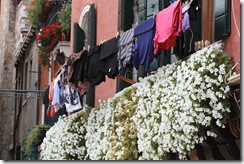 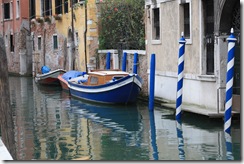 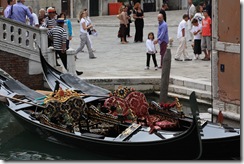 (We ran into this little girl on one of the very narrow streets in Venice.  I’m sure this little girl is probably close to 2 years old, but since Abbie is super tall, they were the same height.  It was hilarious watching them stand there and stare at each other.  And the little girl touched Abbie’s shirt so Abbie was looking down at her shirt for a while.  And Abbie was waving and saying “ciao caio” to the girl, but the girl was just staring at her and Abbie didn’t know how to take that.  TOO funny!) 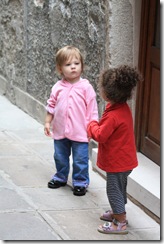 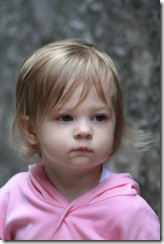 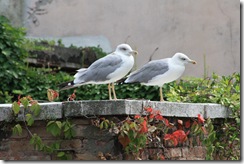 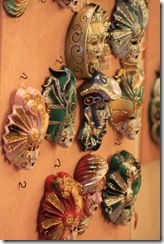 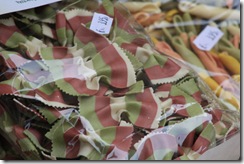 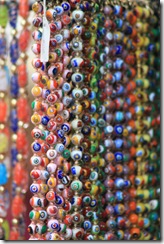 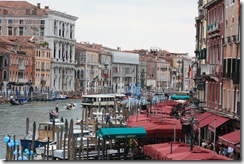 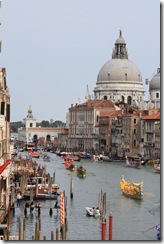 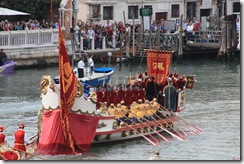 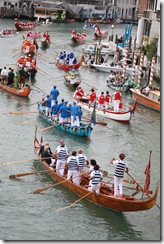 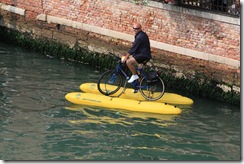 We were in San Marco Square and we let Abbie run around a bit to burn off some energy.  She was having a good time chasing the pigeons, and dancing to the music, and saying "Ciao, ciao!" to everyone.  We passed this large group of people (probably 25 – 30 people) sitting on steps near the church.  Abbie picked out this Turkish man, who was sitting with his family, to go flirt with.  She walked up and started saying "Ciao ciao" to him and waving and smiling and as soon as he responded with a smile and started talking to her, it was all over.  She stood in front of him for probably 3-4 mins (Mark was right by her) and stared at him and Mark talked to him and his family for a bit.  We finally got her to say bye bye to him and she waved and blew a few kisses and you heard at least half of those 25 people on those steps go "Awww!".  It was hilarious.  So we got her about 20 ft away from that family (as most of that group on the steps watched) and all of a sudden she turns around and RUNS back to him with her arms open.  Everyone was laughing at her and he scooped her up in a hug and she stayed like that in his arms with her head on his shoulder for like a full minute!  I couldn't believe it.  This girl NEVER slows down, let alone in a strangers arms, and here she was, about ready to take a nap.  Again, everyone nearby was saying "Aww" and laughing at her.  The Turkish guy said "Do you want to come back to Turkey with me?"  His family (wife, 2 kids and some other guy) were all looking at her and laughing.  He said that she sensed that he likes kids or something like that.  So finally we pried her out of his arms and I was carrying her away and she said "bye bye" and blew him a big kiss with the "MUAH" sound effect and everything and again, most of those 25 people on the steps went "Awww".  It was pretty funny.  It's ironic that Mark and I are both fairly quiet people who tend to like to blend in with the woodwork, but our little pips is the exact opposite.  She doesn't at all mind being the center of attention and loves grinning at people and blowing them kisses. 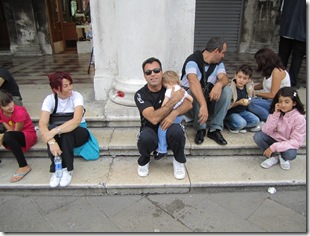 Yesterday Mark was out of the porch with her and our neighbor was walking by.  Abbie said "Ciao, ciao!" to him as he walked by and waved to him.  He returned her greeting as he kept walking by.  Apparently she did it a few more times and pretty soon he was 20 ft away and Abbie yelled "CIAO CIAO!" to him again and he turned around and yelled ciao ciao back to her.  HAHA! 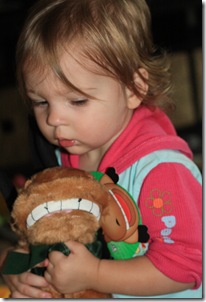 Oh, and while I'm on Abbie stories, the other day Mark was changing her and she pooped.  He opened her diaper and said "Holy cow!" and Abbie said "Moo! Moo!".  Mark cracked up!  Abbie's learning a bunch of animals sounds and one of her newer one's is a cow's moo moo and a bee's buzz buzz.  So she uses them any chance she gets. 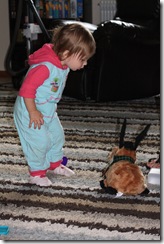 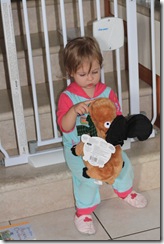 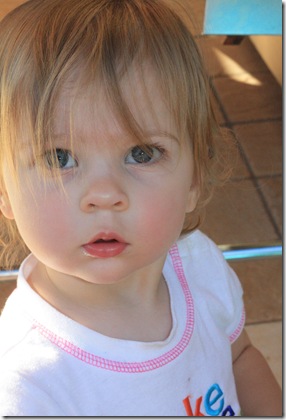