Trip to the Italian grocery store

Mark and I were all geared up to run errands yesterday and drove all the way to Pordenone to go to Centre Casa (House center – which I guess is like an Italian Wal-Mart kinda, without the food and clothing sections).  We got there and realized that May 1st is the Italian Labor Day, and that place, along with every other place we wanted to go to, was closed.  Nice.  So we tried again today and realized the sign said “closed Sundays and Monday morning”, not “closed Sunday and Monday morning” like we thought.  I need to learn Italian very quickly.  Not being able to read or understand anything around you is quite aggravating at times.  But we noticed that the Italian grocery store was open, so we checked that out instead.  It.  Was.  Amazing.

It was probably a very high end grocery store by our and Italian standards.  It seems as though places here are pretty dumpy, or they’re pretty nice.  This place was beautiful inside.  The produce section was pretty neat – they had a lot of dried beans and things like that in these big bins that you could scoop out.  The bakery was amazing, and of course the cheese section was very impressive.  The meat section actually had “normal” meats, which was surprising to me.  At the base commissary, all of the meats are seasoned or marinated in some way, and you cannot buy chicken until it is boneless and skinless, which I thought was very odd.  But the Italian store actually had non-marinated meats and chicken with the skins on.  I was glad to see that.

This is their biscotti aisle.  Notice it is an ENTIRE aisle of just biscotti cookies. 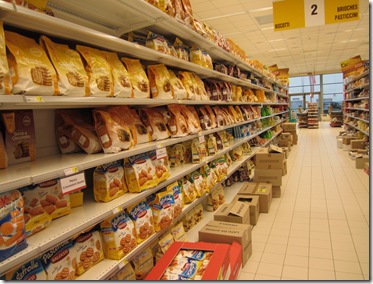 On the other side of the aisle was all different kinds of cookies, although they were mostly wafer type cookies.  I didn’t see any Oreos or chocolate chips.  Thank God I can still get those on base! 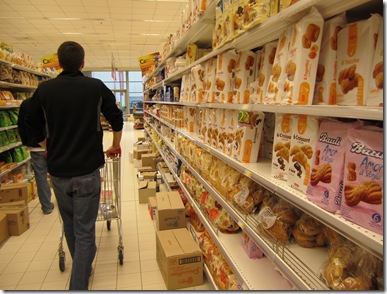 They had an entire aisle just of pasta.  There were so many different kinds of pasta, many of which I’d never seen before.  I was very impressed!  And it was cheap!  Most of them were like .70Euro.  (So around $1.) 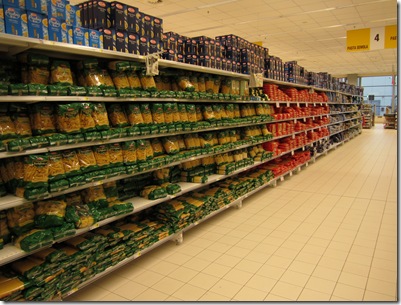 And this section with the pre-packaged noodles with the sauces on them already was at least 10 times bigger than any you’d find in the States. 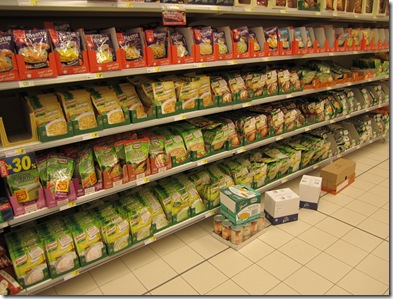 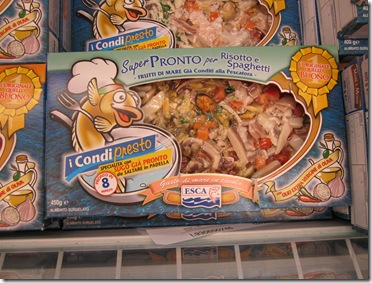 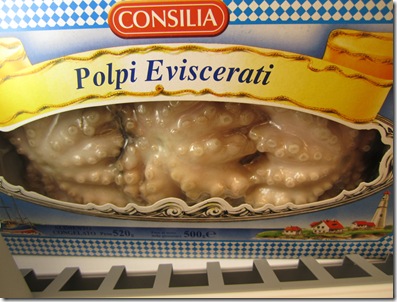 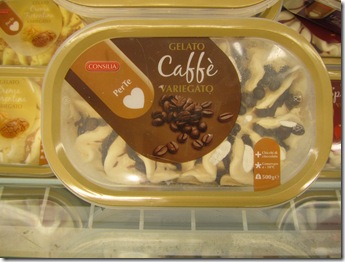 We bought one with 4 different flavors in it, and it’s pretty darn good.  (And I’m quite the ice cream connoisseur.)

We decided to try our hand at making an authentic Italian pizza.  We made one with tomato sauce and one with just olive oil, and then put salami (they don’t really use pepperoni here, it’s usually salami or prosciutto), garlic, onions, fresh mozzarella and basil from my new basil plant on it.  They were pretty good, although I should have cooked them longer. 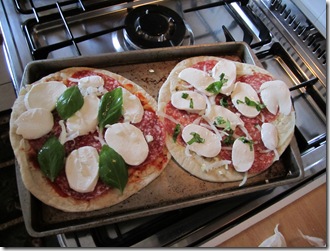 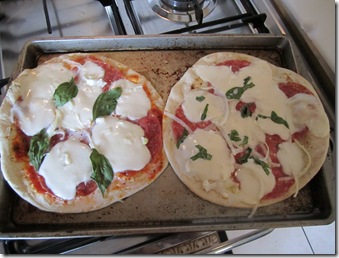 Oh, and the big bottles of olive oil were only 3.70Euro!!  I couldn’t believe it.  Those bottles are like $8+ in the States!

I think it's funny and ironic that we both just blogged about grocery stores! Yours looks awesome!!!