Mark has been gone for the past 2 days.  He’s in Vegas with his class going to what they call “The Petting Zoo” and learning about a whole bunch of classified stuff.  Overall, my time alone with Abbie has been better than I anticipated, which gives me hope for our time in Germany.  Today we ran a bunch of errands and then had lunch together. (Well I ate and she watched with her mouth wide open until I gave her a little sliver of my chicken nugget.)

We had an “assignment coffee” last night, where I got together with the squadron wives who’d been to Germany and asked them a bunch of questions.  They said that he’ll be gone a LOT.  As in, 6 month deployments and a month or two more of TDY’s every year...  I’ve heard NUMEROUS times that I need to get out and travel by myself while he’s there, because if I wait for him to be around I’ll never get to see half of what I want to see while we live over there.  It’s intimidating thinking about traveling with Abbie by myself though, but at the same time, I really do what to see a lot of things while we’re over there.  I want to go to Holland and see the tulips.  I want to go to Prague.  I want to drive through France and see the beaches of Normandy.  I want to go to Dachau (concentration camp) and go to the Christmas Markets in Germany.  I want to see all the castles I can.  I want to go to Switzerland and buy a watch and go to Vienna and see where the Sound of Music was filmed.  I want to go to Greece and I REALLY want to go explore London (which will only be 6 hours from us!!!)  And if I make it to Ireland and Scotland, I’ll be one happy camper.  Granted, I would LOVE to go visit all of these places with Mark if possible,  but I’m afraid that if I wait for him, I’ll miss my chance.  One of my mentors here said that she visited 24 countries when they lived in Germany.  She really wanted to see Rome, but her hubby requested that she not do that without him because he wanted to see Rome also.  They never got the chance to go.  Luckily Mark lived in Germany and he spent a month traveling around with friends so he’s been to quite a few places already.  I have some catching up to do.  But I figure Abbie and I will go scope these places out and if we really like them and Mark hasn’t been there, we’ll just go back.  They said the squadron wives go on trips at least once a month as a group and people are generally very close and supportive there.

In a weird way, it’s almost easier when I’m doing things by myself.  It’s like I know there’s no chance that Mark can help me with anything, so I just suck it up and deal with it all, and it doesn’t seem that bad.  Maybe Abbie’s given me an unusually easy past 2 days, or maybe she’s just getting easier in general.  We had fun today, just me and my daughter.  (That reminds me a Mercer Meyer books.) 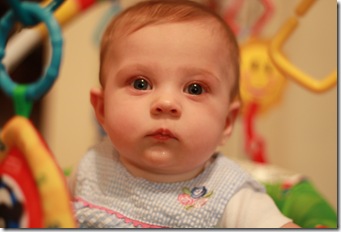 (I really need to get Mark to take more pictures of Abbie and me.  I have TONS of him and her, but not very many of her and me.  Kinda makes me sad.)