Despite this being my 188th blog post, I am WAY behind in keeping up with this blog.  Time just seems to be flying by lately, and I have a feeling it’s going to stay like this until after we get to Germany because we have something going on, someone visiting or we’re out of town every week from now until the end of January.  I don’t even want to begin thinking about moving overseas yet.  Ugh.

I had the flu or something for the past few days, which was not my idea of fun at all.  Thank God Mark’s brother was in town and could watch Abbie for me while I spent all day in bed.  I don’t know what I would have done if he hadn’t been here.  I’ve been trying to avoid her as much as possible, as hard as that is, so she doesn’t get sick.  I feel much better now so hopefully it’s all behind us.

Speaking of Abbie, the little turd threw her first temper tantrum yesterday.  I was giving her a bath and she was reaching for the wash cloth.  After I’d rinsed it off, I gave it to her to play with and she started sucking on it.  Nice.  And then she slapped it down into the soapy bath water (EVERYONE gets wet during Abbie’s baths now).  So I took it away from her to rinse it over before she started sucking on it again, and she threw a FIT!  Started screaming and smacking the water and got super mad, until I gave it back to her, and then she was fine again.  Oh boy…  We have a VERY high strung baby.  Her new favorite thing is to blow raspberries ALL the time now.  You look at her and she sticks out her tongue and spits everywhere.  It’s her happy noise.  And if you stick your tongue out at her, she’ll do the same to you, but she sends spit flying everywhere.  It’s pretty cute… except when you’re trying to feed her.  Do they make adult sized bibs? 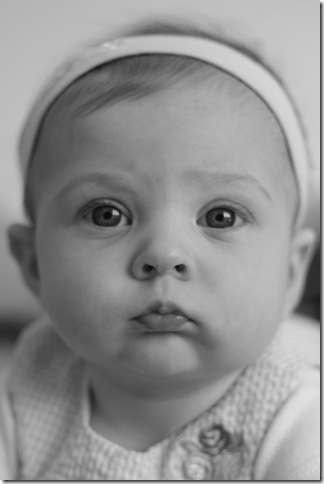 We still need to sell both our Jetta and Explorer.  I posted ads on Craigslist and got one response for the Explorer – someone asking if I wanted to trade it for an RV.  Uh, no.  Hopefully they’ll sell in the next few months.  I don’t know what we’ll do if they don’t sell before we move.  I don’t even want to think about that now.

Other than that, not much is going on.  Mark graduates next Friday so his parents and grandparents are coming on Wednesday to stay with us.  We’ll have a full house.  Should be interesting.  Abbie’s 6 month appt is on Monday so I’ll be sure to post her stats after that.

Hope you all had a happy Thanksgiving!

I'm so happy I get to be one of those "someones visiting" between now and the end of January. I'm so excited to see you all!