I got the opportunity yesterday to watch Mark do mid-air refueling from a KC-135 (tanker). I feel really lucky to have had this chance since not many people get to do what I (and 6 other wives) did. Here are a few of the pictures.

We met at the squadron at Luke at 5:20am (ugh) so we could drive to Phoenix Sky Harbor Airport, which is where the guard base was that was the home of the tankers. 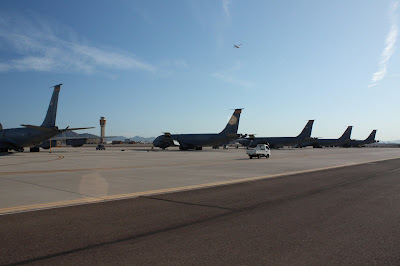 We had to sit through 2 short briefings on evacuation procedures for the plane and also what was and wasn't allowed. The guys in charge where really laid back though and light-hearted about the whole thing. The rules were serious, but they were trusting that we wouldn't break them. 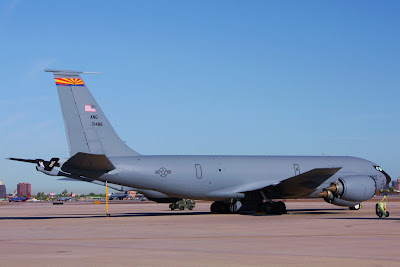 We were escorted by "Brick" from Mark's squadron (one of his IP's) - he's the one on the left, and the guy on the right was Don. He's the "boomer", or the guy who operates the boom (see following pictures). Don's been in the guard as a boomer for 25 years and was retiring in 19 days. 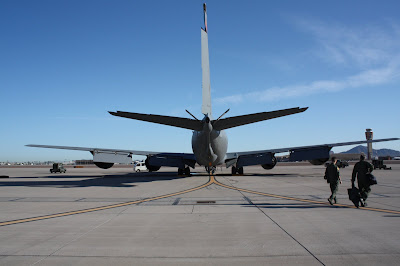 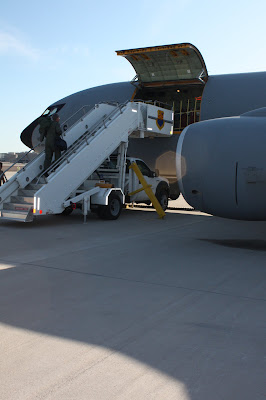 The top half of the plane was for people and/or cargo. They can fold up all the seat to make room for more cargo if need be. The bottom half was all fuel. 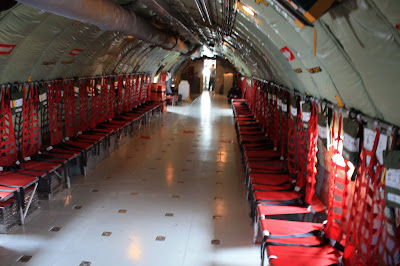 Here's the cockpit of the KC-135. Quite a bit bigger than the F-16 cockpit and both the people sitting there are the pilots. 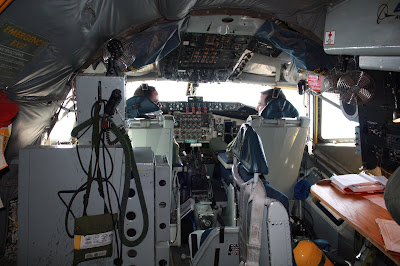 I believe this is Mark's friend and classmate, Joe Bob. The pictures through the side windows are kinda funny colored bc of the polarizing filter I had on the lens. 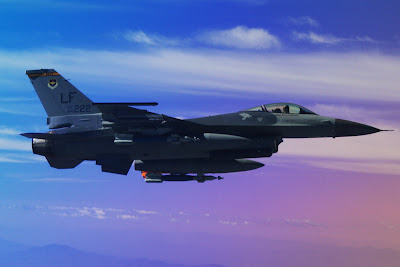 I believe this is Mark's classmate/ friend, Mike and his IP waiting for their turn to refuel. They'd fly in formation with the tanker and then one would stay on the left wing, and the other would go to the back to refuel. And then when the first one was done refueling he would go to the right wing and wait for the second one to refuel. 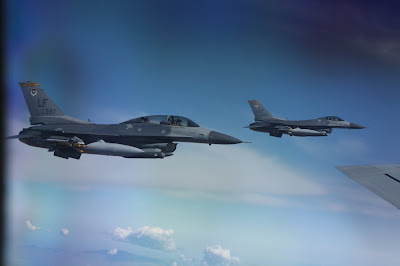 I think this is Mike flying on the wing, waiting for his IP to finish refueling. 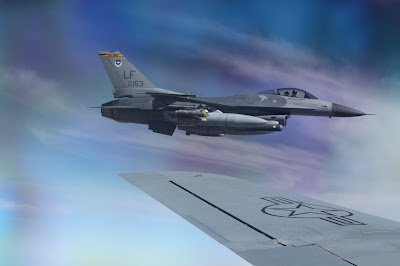 Mike again. They were flying with live bombs and you can see them on the bottom of Mike's jet. 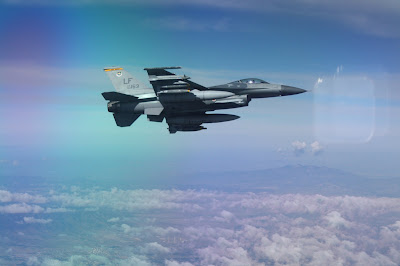 This is Mark's IP flying to the right wing after he got done refueling. I couldn't get these pictures of Mark because he didn't fly down as much as his IP did when he was done refueling. 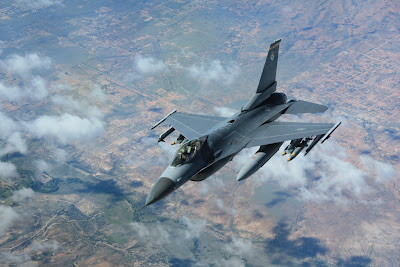 Mark coming up to the tanker. To get these pictures, you have to lay on your stomach in this little area at the very back of the tanker. This is the boom. 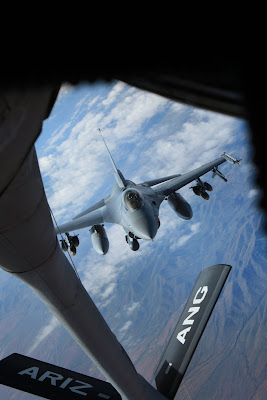 Mark coming up on the boom. His IP had some trouble getting attached to the boom, so he told Mark to hold back until the tanker was flying straight. They flying a running track shape in the sky and it's easier to connect in the straight aways vs in the curves, especially when you're weighted down with bombs. He would have had to use AB (after burner) to keep in position with the tanker. 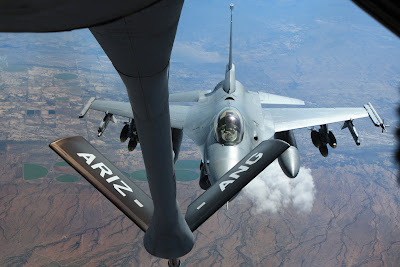 That's my husband in the cockpit of that jet! Crazy! It was so neat to see him in his element. I got to say hi to him over the radio, but I didn't hear that he said hi back. The headphones were really quiet (or I'm just deaf). 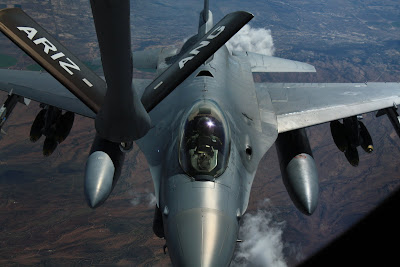 So this is how they refuel mid-air. The boomer can control the boom, and make it move around and extend. So the jets just try to get close to the boom and then hold their position and then the boomer moves the boom the last foot or two and starts and stops the flow of gas to the jet. 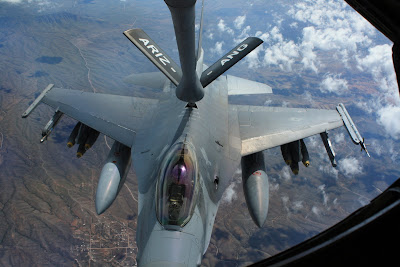 All refueled and ready to go drop some live bombs! I like this picture. 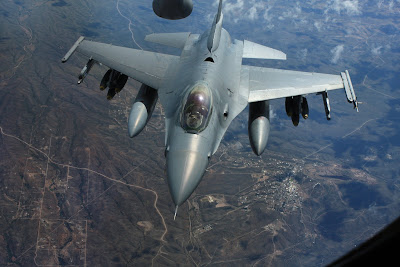 Flying off into the wild blue yonder. I didn't get pics of Mark on the wing of the tanker because I was already down in the boom area when he was on the wing. 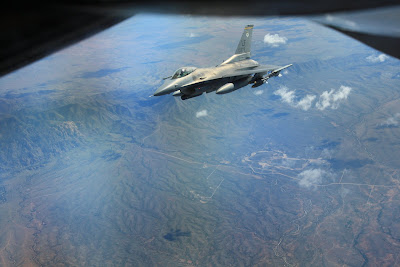 Me in the boom area. I got to stay there for the landing, which was really neat. Makes you dizzy when you get really close to the ground because it's going by so fast, but I loved it. Don, who was down there with me and one other wife, said that less than 100 people in AZ have gotten to lay in the boom area during a landing. It was kinda like the batman ride at Great America. 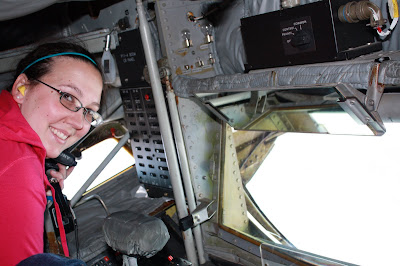 Me by one of the 4 engines. The tanker was huge! (I need to get a hood for my camera to prevent those circles on the pictures. They drive me nuts!) 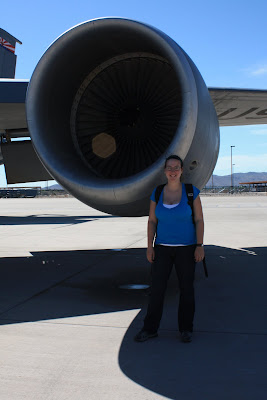 It was tons of fun to see Mark and his friends in their jets like that. It's hard to believe that this is what he does every day at work. It was beautiful in the air also, and neat to see all the AZ terrain. I might get to see them drop live bombs at the range sometime in November and then I'll get to go on the spouse taxi (where they take us on a ride down the runway really fast, but we don't get to take off unfortunately, unless I "accidentally" bump the stick) the day before he graduates. So exciting!
When we first saw the jets coming up on the tanker, my friend Julia (who was also watching her husband refuel) said "That's such a sexy job!" Haha! I agree.

this is by far the coolest thing i have ever seen! you are so lucky! what a great day and what incredibly photos!

How cool!! Great pictures too :)

Those are the coolest pictures Monica, and the new ones of Abbie are beautiful also. What a little punkin :) (speaking of pumpkins, what is she going to be for halloween?) MISS YOU!