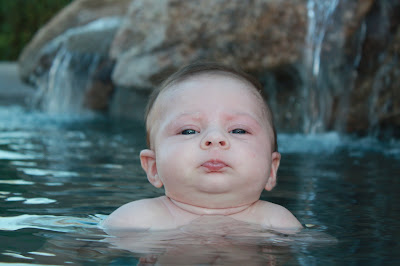 I've been thinking for a while now (since Abbie was born actually) about all these ideas and thoughts I had in my head, prior to giving birth. I thought I had motherhood all figured out before I was a mother, and I was quick to judge my friends who were already moms, thinking to myself things like "I will NEVER do that when I'm a mom". Ha. To all my friends that are parents, I'd just like to apologize for thinking you were nuts have the time - even though you probably had no clue I thought that. =)
I had LOTS of preconceived notions about giving birth. I had a few friends that did it completely naturally without any meds and hey, if they all could do it, so could I. Right? Wrong. You gals are wonderwomen! After 9 hours of being in active labor I jumped all over that epidural like a fat kid on cake. I'm not even sure I want to try to do it naturally next time because that epidural was heaven and I actually enjoyed labor after I'd gotten it. Also along the lines of giving birth - before hand, I didn't at all want to spend all my time in the bed, which is why I didn't want the epi. I wanted to get up and move around. When I was in labor, I didn't want to get OUT of the bed. I just wanted to lay there even though they wanted me to walk around to try to get me to dilate more. Nope. I wanted to stay in bed. I thought I wanted a mirror "down there" so I could watch what was going on. They had a mirror that we could use, but I ended up not wanting to see what was happening because I was afraid it would freak me out.
I didn't at all want Abbie to have a pacifier either. I thought it would be the beginning of a bad habit, but she got one before she was even out of the hospital. That was mainly because of the nurses though, and her having to be under the bili-lights. They said it was comforting for them to suck, so we agreed to give her one. Now I go into her room 14 times a night to stick that stupid thing back in her mouth, and half the time she spits it back out before I'm even out of the room! I wanted to hold off of giving her a bottle, but the nurses thought we should supplement her some while she was in the hospital. Now I'm glad we did because she's had no nipple confusion at all and she'll nurse just fine or drink formula or breast milk out of a bottle with no problems.
I'd seen lots of people riding in the back seat with their babies and I thought there was no way in hell I was ever going to be one of those people. After all, she'd be just fine back there by herself, right? Ha. A few trips with her screaming bloody murder and my arm falling asleep from reaching behind me, I learned that sitting in the back was much easier. (Although I still don't do this a whole lot, and certainly not for entire long car rides. I get her situated and then I move up front.)
One of the big ones was co-sleeping. I would have bet you $3000 before I had here that she would not sleep in our bed with us at night. I was DEAD set against co-sleeping with her because I thought that was the beginning of a really bad habit and I didn't at all understand why people did it..... until I was going on a month with little sleep and getting up with her 3 times a night for an hour each time. I'm still not a big fan of co-sleeping for us personally, but I do understand why people do it now.
Along with the co-sleeping, I had NO clue that some babies just don't sleep well and others do. I thought that all babies slept a lot without coaxing from parents, that you could just lay them down and walk away for a few hours. In my dreams. My baby is particularly tenacious and she definitely lets you know that she's not happy being by herself sometimes. Eventually she'll learn to be by herself, and I always thought we'd "teach" her by letting her cry herself to sleep. That's a LOT harder said than done. When it's your own flesh and blood in the other room getting increasingly more fussy and you know it's going to turn into a full on scream pretty soon, it's next to impossible to just ignore it. And even if you do try to ignore it, you're more miserable than the baby is, so it's not even worth it.
In my 3 short months of motherhood, I've learned that babies don't fit into one mold, and what works for some babies, won't necessarily work for MY baby. And I've learned not to judge others parenting techniques. =) 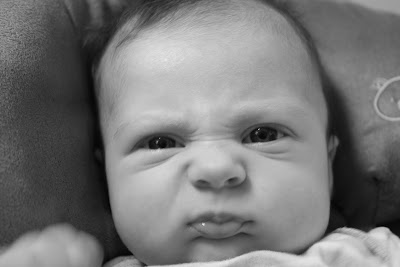 Amen to that, sister! In all honesty, I too have to admit to myself thinking "you just wait..." and "easy to say when you don't have a kid" when people tell me their plans for having kids (and I of course don't mean that directly at you) but I think it goes both ways!! It is funny though, how all our plans go right out the window and these little angels/demons run our lives!!

Ha ha ha i LOVE that last picture... you can just imagine what she was thinking ;) -Rachel

I hear you on the co-sleeping. For whatever reason, I am embarrassed to admit (since everyone gives me a hard time about it) that we started her co-sleeping a few months back when she stopped sleeping through the night. She sleeps better in bed with us and seems to crave the snuggles. Both of us did not want co-sleeping but here we are, and we hear about how bad it is from our moms. It something we still need to work out....

I love you, Monica.

Also, I am NOT embarrassed to admit it: we co-sleep! Yay! It works better for everyone in our house. I like sleep, and I get more if I don't have to get up and settle the baby back down a bazillion times a night. She sleeps better with us, and when she sleeps, we all sleep!

P.S. Liz, research shows that co-sleeping is NOT bad. Do what works, that's my moto.