Mark and I had a nice and relaxing weekend at home. Saturday we went to an RV show and had fun dreaming about the future and looking at all the really expensive RV's. I think the most expensive one we saw was $280k.... Someday. =)

Saturday night we got locked out of our house... Fun times. We were in the back yard looking at a spider and I had just let the dogs back in the house and shut the sliding glass door and the stupid thing locked. Kinda pissed us off since that stupid door doesn't ever lock when you actually want it to and you have to slam it at least 5 times before you can actually push the little lever down to lock it. Apparently when you shut it from the outside though, that's a different story. Luckily Mark has his cell phone on him and after finding the perfect spot in the middle of the street, he was able to call Nate and Gail, who had keys to our house because they watch our dogs for us.. Thank God. So they came and saved us and then we all went out for ice cream. Oh, and we had Abbie outside with us when we got locked out - thank GOD. Otherwise I probably would have broken a window to get to her.

Abbie got another one of her 2 month shots today. She was supposed to have the other 2 of them, but they were out of one of them so she only got one. I HATE when they give her shots. She jumps and her eyes get big and she sucks in her breath for like 10 seconds and then she SCREAMS. And then about 30 seconds later she's fine. But I still feel terrible. I had her weighed while we were there and she's up to 12lb 4oz! So she's still right in the 50th percentile as far as weight goes, which is good.

I've been supplementing her a little more lately with formula. I really think my supply is kinda letting up some. Last night before she went to bed, I nursed her on both sides for about 5 mins each, and then Mark fed her a 6 oz bottle and she drank all of the bottle. He'd try several times to take the bottle away from her before she finished it and she'd get upset every time. She woke up a little before 3am this morning and I tried everything to get her to go back to sleep without nursing her, but it didn't work. So I nursed her on one side and then tried to put her down again since she fell asleep, and as soon as I put her down, she woke up and cried. So then I nursed her some more on the other side twice, both times she fell asleep but woke up when I put her back in her crib. So after 2 hours of that, I finally got her a 4 oz bottle. I tried taking it away after she drank 2 oz's and she cried, so I gave her the other 2 oz's and she finally fell asleep and slept until 9am. So I just really don't think she's getting enough from me. I've noticed I'm not leaking as much as I used to also, and they don't ever feel very full anymore. I'm still nursing her during the day, but I can nurse her on both sides and she still seems to be hungry. I'll nurse her as long as I can, but it seems like more and more I'm having to supplement her because she's always hungry. I can either let her nurse for 1-2hrs almost continually, or I can give her a bottle and she's happy. I still try to nurse her on both sides before I give her a bottle though. I guess 3 months of nursing is better than nothing... ?

We love her froggy-legged pose. She sleeps like this a lot. 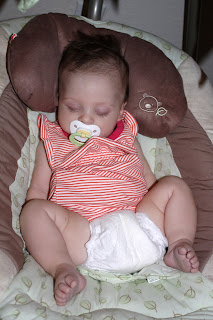 An evening at the park by our house. 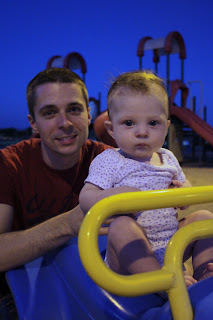 Getting better at holding her head up during tummy time. 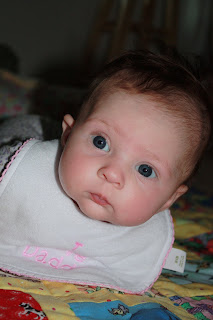 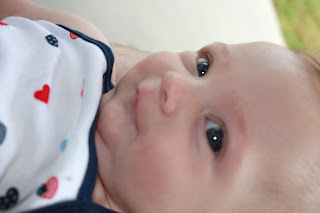 Her new sunglasses - a necessity when living in AZ. 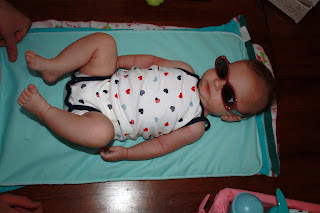 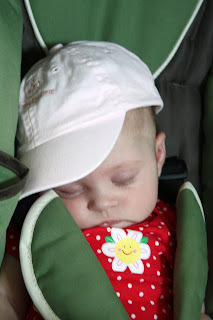 Don't know if you know this already, but your supply is related to how much she nurses. Your body balances itself out. So, if you nurse more, your supply will go back up. If you're giving her a bottle, you need to pump to compensate for the loss of stimulation from baby sucking. Though, a baby is the most efficient pump ever created. If you feel like she's not getting enough, nurse more. Within a few days, you'll produce more, and she'll get more in less time, so she won't have to nurse as long to be satisfied.

Rob and I used to think that getting an rv was out of the picture. However, we discovered this place up in Richmond, Va that sells rv's, 5th wheeler's, etc.. most of them have been taken back by the bank because the owners could no longer pay for it. We paid 15,000 for ours, for a USAA loan to cover it along with a pretty good deal from them. I'll have to send you pictures (we actually have a trailer), but I like it! Something to consider, but I'm sure that someone out west has a similar sort of business set up!

I love the froggy pose!