If you ever get the chance to visit San Diego, do it. The city is just amazing. Coming from Phoenix, the 40 degree (yes, literally 40 degree) temp difference was enough to make me pack my bags and move there. SD is a beautiful city, and I love all the hills and the coast. Plus it was great to see so many people out and about. You don't see that here in Phoenix this time of year.

The drive there was interesting. I'd never seen rocks like we saw on the way there, or been in the desert really. It got up to 119 on our way to CA, which was crazy, and it was 74 when we got to Coronado Island. We went through a few border patrols and at one point we were probably 500 feet from the Mexico border. That was the closest I've ever been to Mexico.

We wanted to eat seafood on Friday night, so we went to downtown Coronado Island. After driving around a while, we saw a place we wanted to try. But after seeing the menu posted outside, we didn't want to pay $30 per entree, so we decided to go somewhere else. We drove to the harbor in downtown San Diego and checked out a few restaurants, but one was really expensive, one we'd eaten at the last time we were in SD and the others were all fast food. So we opted for the one we'd already eaten at, which was annoying bc we wanted to try something new, but it was 8:30pm and we were hungry and tired of carrying Abbie and her car seat around. At one point Mark went to the bathroom while I was holding Abbie, and it wasn't until Mark got back that I realized I'd had an entire conversation with my less than 2 month old for the past 5 mins. People probably thought I was nuts. Oh well.

After we ate, we went back to our hotel, which was right on the beach, and went for a walk. We figured out how to use another mode of our camera - night portrait. Here's one of the shots Mark took. Next time we'll use the tripod, but we didn't have it with us this time. 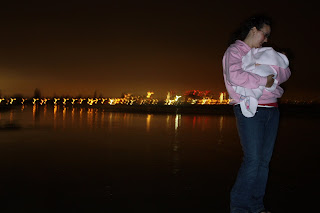 Saturday we decided to go to the San Diego Zoo. Last time we were here we went to the Wild Animal Park. Mark got in free due to the military discount and I got a 10% discount so overall we saved $40! We had a great time messing around with our camera also. Here are a few of my favorite shots. 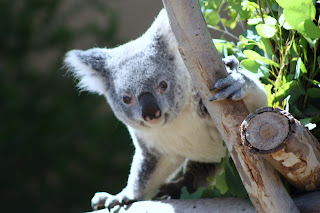 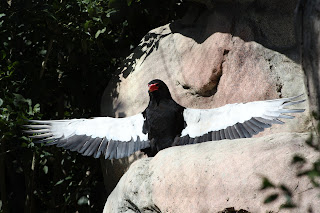 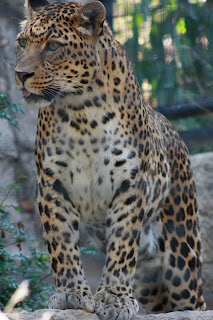 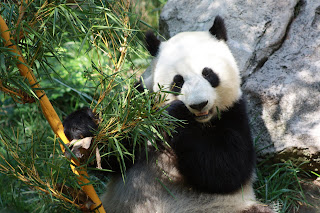 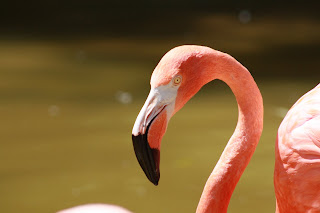 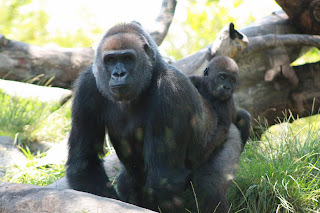 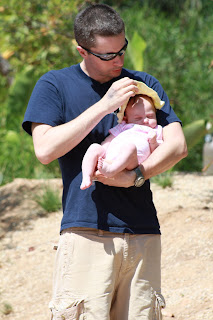 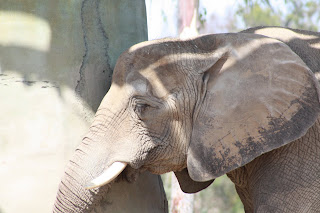 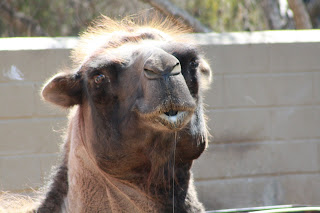 Though after seeing all those animals in the zoo, our most favorite thing to look at is still this. 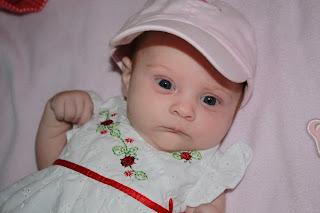 (Doesn't get much cuter than that.)
It is great fun walking around with a baby. It seems in general, most people just LOVE babies. She's an instant conversation starter. It's fun to watch people look at her and then look at us and smile. We had quite a few people come up and start a conversation - usually grandparents who want to check her out and then tell you all about their grandkids and how old they are and where they live and when they'll get to see them next, etc. Mark and I enjoy the attention she brings and we love showing off our cute pip-squeak. I mean, seriously. How cute can one kid be?? 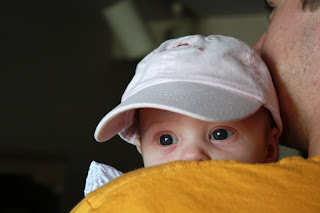 We went to the squadron bbq on the beach Saturday night and then afterwards we took some more pictures on the beach. Some of these look like they're fake backgrounds, but I assure you. They're not. 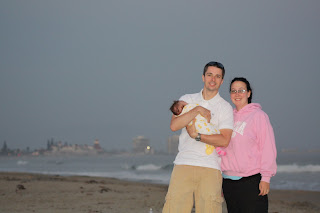 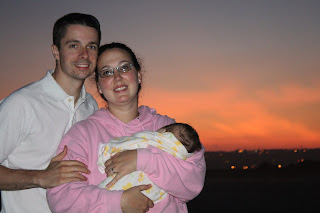 After our beach photo shoot, we went downtown Coronado and ate at a 50's diner and then drove around the island some more.
Sunday we got up and ate breakfast downtown Coronado and then we were going to take more pictures on the beach during the daytime. However, the beach was PACKED and parking was scarce, so we decided to drive around the island a little more before we headed home. Along our drive we found a park on the other side of the island so we did another photo shoot. Here's one of those pics. 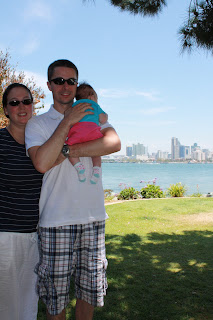 We loved our time in SD and we were sad to leave there (and the cooler weather). We did discover two things on our trip though. One - Abbie really is a good little traveler. It was over a 5 hour drive to CA and she did really, really well. If she'd get fussy, we'd pull over and change her and then feed her a bottle while we were driving and she was good to go. She got a little fussy on the way back, so Mark got in the back with her and she was ALL smiles for him. She was "talking" and grinning away. It was really cute. Two - we decided we want to get an RV when we retire and just travel all over the place. There seem to be RV camps EVERYWHERE and it just seems perfect to be able to have a portable home. Hopefully by that time we'll be able to afford it because we really would love that. In the meantime, we might try to get a pop-up camper so we can go camping with our kids.

How cute! Glad you guys had a good trip! We have a good zoo in Omaha too! Lol!