A weekend of showers

We had 2 showers this weekend, one thrown by my co-workers on Friday, and one thrown by our friends here, on Sunday. I can't believe all the stuff we got!

Here are Mark and I, at 28weeks4days pregnant, at one of our showers. 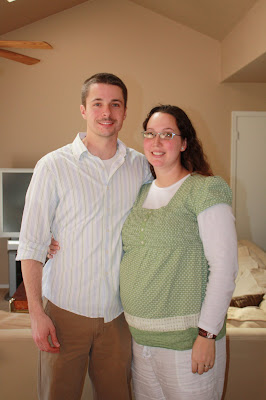 The shower on Sunday was with our military friends here. They were so sweet to have a shower for us, especially since I haven't known some of them very long - only for a month or two! 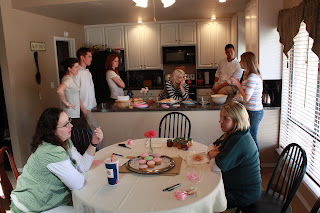 We played "Name that baby food flavor", which was lots of fun. I even got over half of them right! All of the girls in this picture are spouses of guys that are currently in IFF training, and Elijah, in the back, is in Mark's class. The shower was thrown at his (and Krystal's - sitting down in the striped shirt) house. 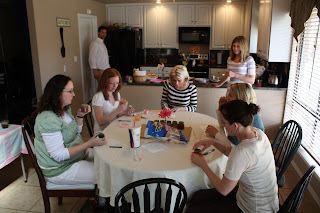 We also played "guess the size of my waist" (what waist?) using a peice of ribbon cut to the length you thought it was. Lynn, the girl standing next to me with her hand by her face, apparently thought my waist was over 5 feet around. HAHA!! It pretty much feels like it is to me so I couldn't blame her for thinking that too. Her piece of ribbon when around both me and Lisa, who is 38 weeks pregnant also! 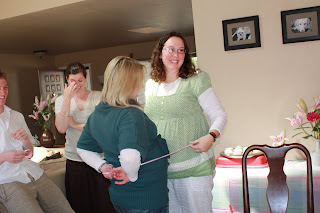 We got so many gifts for Abbie! I couldn't believe how are friends really went "all out" and got us TONS of stuff. Below we're opening one gift, from Lisa, who got us so much stuff! We were really touched by how generous our friends are. 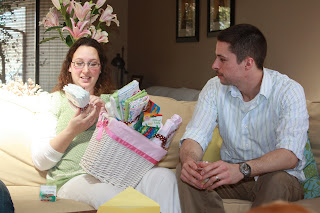 Here are our gifts from our Sunday shower. 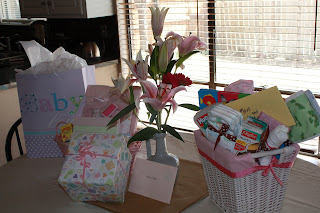 We both had a really great time, and we were excited that there were a few guys there too! Our friend, Krystal, said that real men attend baby showers, and I agree. I'm glad Mark was able to participate in this one, especially if he ends up not being able to go to the one in IL.
Here is what I got from my co-workers. In the bag is an adorable newborn outfit with tiny little shoes and wet wipes. And the other thing is a baby bathtub full of towels (one with her name on it) and bath toys and wash clothes and a stuffed animal. I loved them! 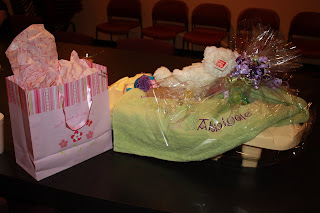 Here are I am with my friend, Elyse, who I've worked with for over a year and a half. She's 7 weeks ahead of me in her pregnancy, and the shower at work was thrown for both of us. 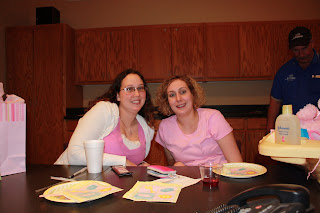 Elyse had to try out one of the hooded towels she got for her baby (who is Lillian Grace). As you can tell, Elyse is lots of fun to work with. I'll miss her a lot. 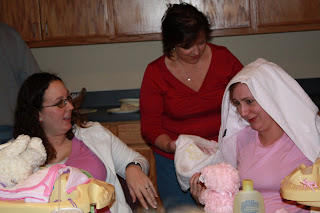 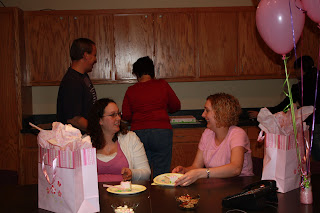 Here we are with the cake they got for us. It was really good! (And yes, even though we look the same size, she's 7 weeks ahead of me.... Ugh.) 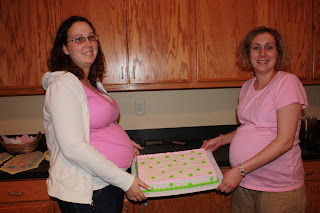 I truly feel blessed by everything that's been given to us for our baby so far. It's so nice to know that other people care about you and are excited for her arrival also. Getting all these gifts has really put me in an organizing mood though, so it's driving me nuts that I just have to pack them into the closet with all the rest of her stuff, until we move. I'm going to go into organizing overload once we're at our new place because I'll not only have all of her stuff to get ready, but an entire house to organize also. Luckily my mom will be there to help me and I know Mark will be a big help also. We're not going to get any of her big items (like furniture) until we move because we're thinking they'll have a better selection in Phoenix and it's a few less things to worry about in the move.
Yesterday after our shower, it was BEAUTIFUL outside - almost 70 with just a slight breeze (instead of the typical OK 20 mph wind) - so we took the weinas for a walk. We walked a little further than normal and maybe a little faster too and on our way back, I think I might have had a few Braxton Hicks contractions. They didn't really hurt, but my belly got really tight, and there was a weird pulling sensation, and my whole belly was hard. It felt pretty weird, but kinda neat too. I guess I shouldn't walk quite that far or fast next time. I was thinking walking would help my pelvic pain though, but it didn't at all and last night it was TERRIBLE. Sometimes it hurts so much when I try to get up from laying down that it takes my breath away. And any way I roll, hurts. I've tried getting up different ways to avoid the pain, but they all hurt. And this morning it took me 3 tries to get out of bed because when I would roll on to my side it felt like I was pinching a nerve in my hip and my leg would cramp up really bad. Ouch! I told Mark he's going to have to build some sort of bar thing for me so I can pull myself up, although that would probably still hurt. My other huge challenge right now is trying to put on underwear or pants. The movements of bending over and then bending my legs just don't work too well for me right now and it hurts also. So I try to sit on the bed, but I still have to bend over and bend my legs. Oh well. She'll be worth it and I only have 3 more months left anyway! I'm so excited!

I spy your mustatchio'd husband! LOL.

You look great! Funny, I forgot about braxton hicks! I didn't have them often but it was weird when I did!

Hey hun- I hoped there is still some stuff Abbie needs for your next showers~!!! I don't THINK anyone will duplicate most of my gifts but who knows :) U look adorable. ALMOST makes me want one... ALMOST. Another year and a half or so... then maybe! When i was shoppinng for your gifts i asked Jared (jokingly) about when to have one and he just said no way. LOL.

I'm so glad you got so many great gifts...you never know what you're going to need until you don't have it :)

I know our little one is on his way, but if you need anything just ask!

Showers are SO fun! You still have your 'big' one coming up still, right? I LOVED organizing their closets (well, still do ;)

You won an award on my blog!