Well the packers are here. Neither Mark nor I slept very well last night. We didn't fall asleep until after midnight and Mark was up by 5:15am. I got up with him at 5:30am, but I also got up at least 4 times between 12am and 5:30am to pee, put a sock in the door to keep it from rattling, and shut the window bc the blinds were blowing and it kept waking me up. And I woke up with a headache. Every time I'd wake up I'd have a hard time falling back asleep bc I kept thinking of everything I had to do before the packers got here, and I was worried about how Ollie would be with them. He's a handful at times and during our first move with him, he bit one of the movers and made the guy bleed. Lately he's been EXTRA protective of me too, so I knew it was going to be rough. Luckily, he hasn't been too bad. Both the dogs are sitting on the couch with me right now and they're finally not barking or whining.

There are 3 guys here packing up our stuff. All of them keep saying how much stuff we have..... We do have a lot of junk, but we've also gotten rid of a lot of it too! I think when we get to Phoenix I'm going to go through all my clothes and get rid of a bunch of them. I have clothes that are too small though, and I still have hopes of getting back into them, which is why I haven't gotten rid of them yet. And now I have bunches of clothes since I don't fit into my normal clothes anymore.

Here is a picture of the stuff we're moving ourselves. I'm still not 100% sure it's all going to fit in our SUV and Jetta... 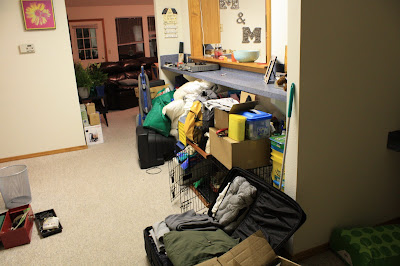 Ollie's been pretty worried. He knows something's going on, but he hasn't figured out what yet, so he's been extra needy lately. (2 days until that damn mustache is gone!!!) As soon as we get the suitcases out, Ollie positions himself on top of them. 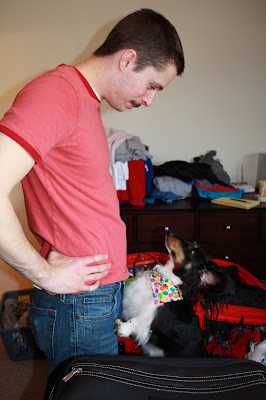 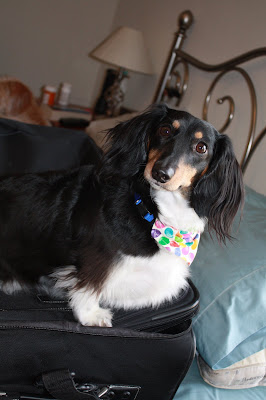 This week I'll be 32 weeks pregnant. I've been feeling pretty good lately, considering all the stuff I've been trying to get done. I have my last appointment here on Wednesday and my mom will be with me for that one since it's right after I pick her up from the airport. My hip/pelvic pain hasn't been too bad at all, and I think she might have finally flipped, although I'm not sure. I've been feeling her up high a lot more lately, but not at all in my ribs, like everyone else always talks about. I feel her on top on the sides and on top in front, and she really wumps me sometimes. Mark's been able to feel her a lot too lately, which is neat. 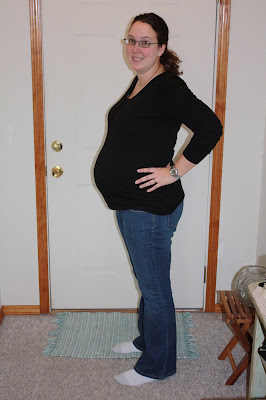 My stretch marks are pretty much getting out of control.... They're terrible. And I've been putting lotion on like crazy, and they're still getting worse. Pretty soon they're going to be from my belly button all the way around my side. You can see the new ones coming in further away from my belly button. Luckily I can only see them if I look in the mirror, but it's shocking every time I do bc so many more have popped up. I hope to God they at least turn white and shrink a bunch after she's here. I know they won't ever completely go away, but as long as they don't look this bad forever, I'll be happy. 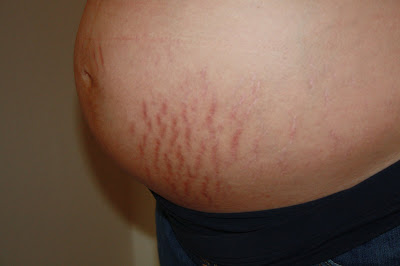 I'm still getting used to the fact that other people (strangers) can tell I'm pregnant now. For some reason I have it in my head that I just look extra fat, so when people make comments about me being pregnant, it sometimes catches me off guard. Mark and I were renting a movie the other day and the check out girl was like "How are you, besides very pregnant?". Haha! I think I look like I'm more than 7 mos pregnant too... I'm not sure I want to have 2 more months of gaining weight... I'm already up about 20-25lbs.... Yikes.

Ahh the joy of stretch marks! I got some around my side, so mine didn't just appear on my belly, I got some creeping around to my back when pregnant.

And can I Say that your husband is pretty damn skinny in that ollie pic? LOL. Your dog is a such a cutie! Have your boobs gotten bigger? I swear that was one of Jeff's favorite things about my pregnancy- and I already had plent to begin with! LOL

You're picture by the door looks great! Hope you got you're cleaning done this afternoon. And, truely, if there is anything else that I can do for you guys please let me know!

Yay, you are finally leaving Enid... so happy for you :)

Have a great time at your party and have a great trip to AZ. We love you and miss you! I will definitely try to make a trip to AZ while you are there. Just let me know when you have a break in company!