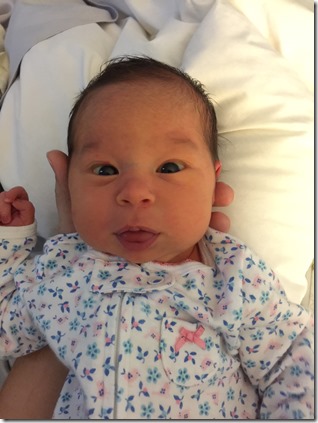 Three of our 4 babies have had some pretty decent issues with jaundice and their bilirubin levels, so Josie having issues wasn’t a huge surprise, but how things played out kind of threw us for a loop.  It was definitely not an ideal situation at all, but hopefully the worst is behind us now.  I hope…

So we were released from the hospital on 12/10.  They did a blood test for bilirubin and 2 tests using this little hand held thermometer looking thing they pressed on her forehead.  The blood test came back at 6.1 and the other 2 tests came back at 6.1 and 6.4.  This put her in the “intermediate risk” danger zone so they wanted us to come back down the next day to have another lab draw done at the hospital.  On 12/11, that lab draw came back on 9.1, which put her lower risk on the chart they gave us.  We had her first appointment on Weds 12/14 and her provider sent her to the lab at the hospital up here for another bili check.  Those results, which we didn’t even get until the next day (Thurs), were 19.3, so they ordered a biliblanket for us to use for her at home.   They had called us around 10am with those results and I waited around until 1:30pm for the biliblanket to show up and it never did.  Everything in me was saying she needed to get under lights asap and to not wait for the biliblanket to show up. 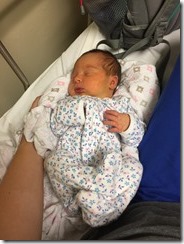 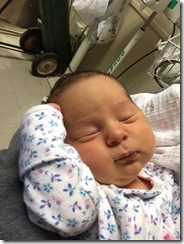 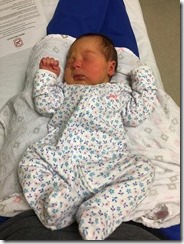 I had called prior to taking her to the tiny hospital here in town to make sure they had the lights here and that they treated babies here, and they assured me they did.  So I took her to the hospital here around 2pm.  I was hoping they could just get her under the lights asap since her last lab was 19.3 which was high enough to need lights, but they made me wait for HOURS before they put her under lights there.  They said they needed to do another lab draw and wait for those results, which takes over an hour to get back, before they could do any treatment.  I think around 5pm we finally got her results for 12/15 and it was all the way up to 22.5.  I flipped out.  I asked MULTIPLE times for them to get her under lights to at least help bring her levels down, but they wouldn’t.  While we waited behind curtains in a small room with 4 “curtain rooms” in it, I listened to some dad scream at his young daughter when she wouldn’t take medicine and when she finally did she puked it all up and he started screaming at her more.  I also heard another person get diagnosed with cancer and listened to his friend, or whoever was with him, try to give him a pep talk.  I walked by their little cubicle when I went to the bathroom and both of them were sitting there crying.  It was horrible, and I was stressed enough already.  Just not a good experience. 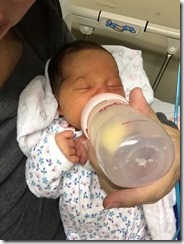 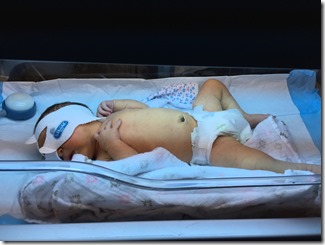 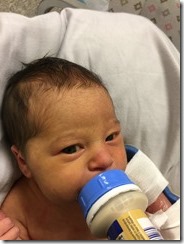 Around 6pm there was talk about taking Josie to Madera.  I had no clue where or what Madera was, but come to find out it’s a children’s hospital north of Fresno, about 2.5 hours from our house.  I lost it completely at that point because I had thought they were wanting her to go to Bakersfield, which is MUCH closer.  I called my friend Dana to see if she could go be with our kids at our house so Mark could come be with me at the hospital and say goodbye before we went somewhere else.  Thankfully Dana was willing to stay with our kids so Mark could come and that was a huge relief to have him there with me a little bit.  Josie still wasn’t under lights at this point, which was infuriating.

FINALLY, around 9pm, they put us in a different room away from everyone else, started an IV on her and put her under the lights until they figured out which hospital they were going to take her to.  Apparently the hospital in Bakersfield had said her levels were too high for them to accept her, but then I also heard it was because they didn’t have room for her there, so I’m not sure which story was true.  Either way, we ended up going by ambulance up to Madera.  Mark had gone back home to the big kids by this point, but I completely lost it again seeing them load my tiny 7lb 6 day old up on a stretcher and wheel her out to the ambulance. 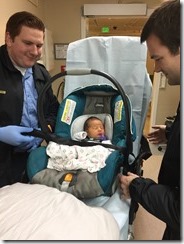 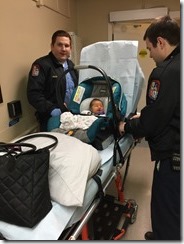 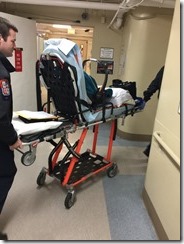 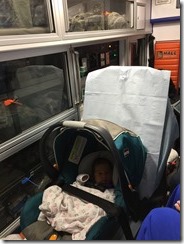 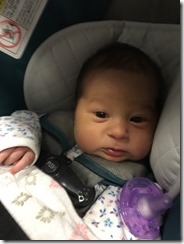 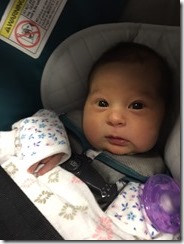 I think we finally left the hospital around 10pm, only to find out the highway down the mountain was closed.  It was raining and wet and we had to take curvy back roads part way to avoid the accident on the highway.  Josie did great on the ride and only fussed a little bit.  I fed her part of a bottle and put her back in her car seat and she slept most of the way.  I was able to lay on a bench next to her and slept a little bit, but it wasn’t very comfortable. 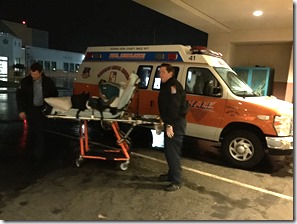 We got up to Valley Children’s Hospital a little after 1am.  This is one of the biggest children’s hospitals in CA, and they were amazing.  All of the staff was super friendly and explained everything very clearly and were completely open and honest.  She had 2 nurses in triage and one of them even offered to buy me a meal since I hadn’t really had lunch or dinner the day before and I had a headache.  She sent one of the techs down to the cafeteria to buy me food.  And the tech that did that was a combat medic in the Army previously.  He said he had some issues after he returned from deployments and his kids are what helped him get through them so he decided he wanted to help kids.  I thought it was a sweet story. 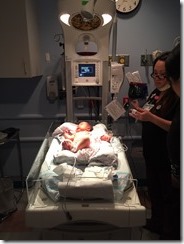 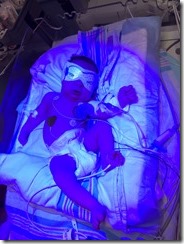 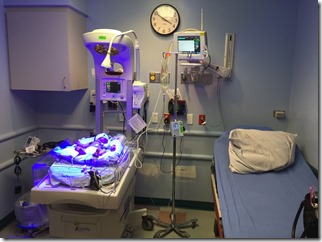 They did a full work up on her.  They collected blood and urine and ran cultures for everything and checked all of her levels for everything.  Her 2am bili level on the 16th was 20.5, so it had come down 2 full points just from a little time under the lights and IV fluids that she got at our hospital.  One of the triage peds wanted to start her on rounds of antibiotics just to cover all our bases in case she happened to catch something from my strep B.  Since the cultures take over 24 hrs to get the results, he was just being extra cautious, which was fine with me.  (All the cultures came back negative and all her labs came back normal, except for her bilirubin.) 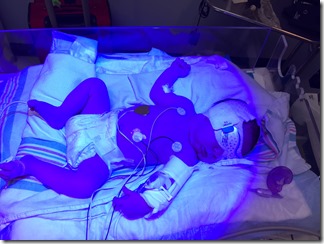 Around 6am we got transferred to a room in rehabilitation and she got into the isolet and started on the triple light therapy.  She loved being in the isolet because it was warm and she could stretch out and she slept really well in there most of the day.  I would wake her up to feed her and change her, but she was pretty content in there, which means I got a little bit of sleep.  That was nice since I had only gotten about 4-5 hours of sleep in almost 30+hours.  At some point they took 2 more bili counts and it was down to 16.7 and then 13.6, which was great.  The pediatrician came in and we talked for a while.  He said if I really wanted, he would release her that night, but I said I would rather take her off of everything and see if she can maintain her own level or if it’d start going up again.  He was fine with that and also thought it would be a good idea to wait just to make sure the cultures came back negative, since it hadn’t been 24 hrs yet. 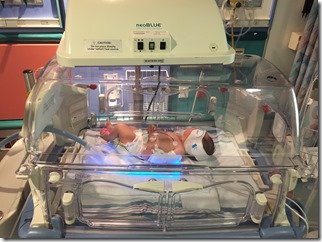 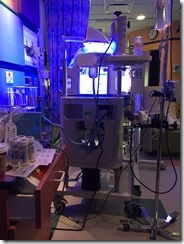 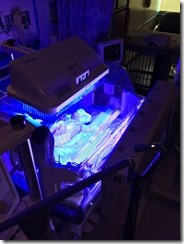 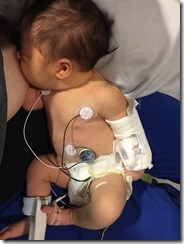 I asked him about the brain damage that can be caused by high bili levels and he said that there isn’t really a set level that causes kernicterus.  He said typically it’s in the high 20’s or higher for extended periods of time before that happens.  (I’m not too worried about her having brain damage from a level of 22.5, since it wasn’t that high for very long.)  He also said he’s seen kids have levels in the 30’s and even in the 50’s in extreme cases.  YIKES! 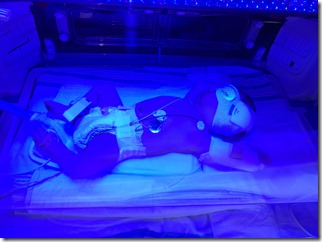 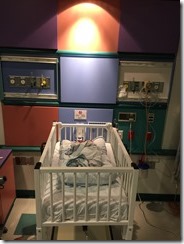 Saturday they did another bili count and it was 13.3 around 7am, so they felt comfortable discharging us.  Since Mark had to load up the other 3 and drive almost 3 hours to get us, it took a little planning.  But I was so relieved that it had come down to a safer zone and she was doing well.  She was up to 7lb10.5oz also because of the IV fluids they had given her.  Mark got to the hospital around 11am and we fed Josie and the big kids snacked and we packed everything up and got on the road home. 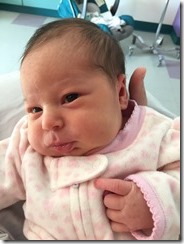 We stopped in Fresno and ate at the Yard House and we had to make 2 more stops for feedings and bathroom breaks so we didn’t get home until after 5:30pm, but it was really good to be home.

I had met with a lactation consultant at the children’s hospital.  She had suggested I follow up with one up here, which I plan to do.  I wasn’t getting great let down, probably due to the fact that I was stressed and not drinking enough water, but I’m not sure I ever really produce enough for my kids to exclusively breastfeed them.  Abbie was the only one that was a great nurser, and the other 3 have all had issues.  I am pumping now to try to keep my supply up while she grows and gains weight and gets stronger to nurse better.  It’s a pain and I’m not 100% sure how I’ll keep up with it when I have 4 kids at home by myself when Mark goes back to work, but I’ll try to figure that out. 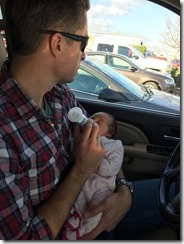 I wish I had been more proactive about her jaundice before her first appointment.  I had a feeling that she was going to need lights and I shouldn’t have waited 3 days to have her tested again.  But I am glad I trusted my gut and took her to the ER for help.  Her doctor wanted to have her use the biliblanket at home (which never showed up, by the way) and then have her rechecked on Saturday, so who knows how high it would have been by Saturday if she hadn’t gotten IV fluids and light treatment.  It’s so easy to forget how stressful the newborn stage is.  You worry about everything.  Are they eating enough?  Are they pooping and peeing enough?  Is she sleeping too much?  Is she getting more yellow?  Is she lethargic?  Should I wake her up at night to eat?  Is she gaining weight?  Is she getting a cold?  (Which right now I am pretty sure she is and she’s not even 2 weeks old…  But Abbie had one and Jamison has one.  We’ve been washing hands and using sanitizer a ton, but I think she still got it somehow….)  She also does these weird little tremors when she’s awake and not swaddled or eating.  Kind of like shivers.  Everything I’ve read says it’s just her nervous system maturing, but it’s another thing to keep an eye on.  She doesn’t do it when she’s sleeping or eating or swaddled and if you hold her limbs close to her she doesn’t do it either.  Just constantly something to worry about.

She has one more draw on Friday, the 23rd.  I hope to God it’s lower yet and we can be done with the jaundice and have one less thing to worry about.  Fingers crossed!

Jamison had a VERY similar story.  We definitely felt like history was repeating itself somewhat with all of this ordeal…