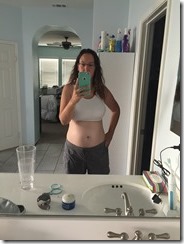 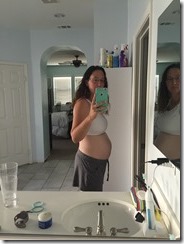 This pregnancy is literally flying by.  I’m trying to enjoy it and take it as it comes as it is most likely my last.  But baby girl is due in 77 days now and that’s CRAZY! 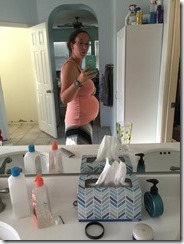 Overall, I feel pretty darn good.  Just in the past day or two I’ve been getting some braxton hicks if I’m too active.  They don’t hurt, they’re just uncomfortable and they make it hard to breathe.  This past week though, I’ve had a headache in the front of my head almost every day.  It’s not a migraine, but it’s this annoying pain that comes and goes throughout the day.  It hurts above and behind my eyes which makes me wonder if it’s sinus related.  Actually I was quite worried about a brain tumor last night…  But I went to bed early last night and slept well and I haven’t had a headache so far today which is nice.  I might need to get my eyes checked though because it could be from eye strain as well.  I always jump to the worst conclusion though, but after 5 days of straight headaches I was getting worried. 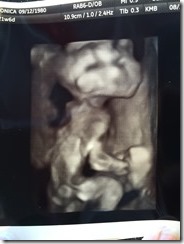 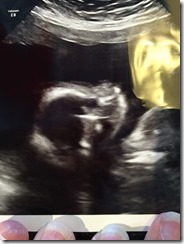 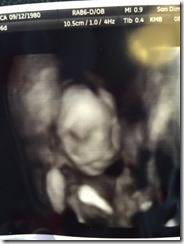 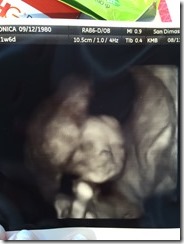 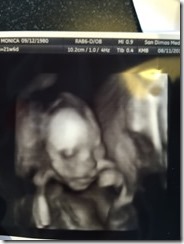 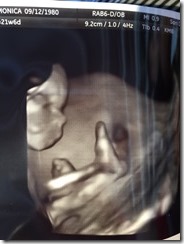 I’m up about 13lbs right now.  I only wanted to gain 15lbs this pregnancy but being that I have 10-11 weeks to go, I don’t think that’s going to happen.  Bummer.  I guess if I can keep it under 25 that’ll be good and usually later in pregnancy I start losing weight anyway.  This past week I’ve gotten a few “foot cramps” in the crease where my right foot meets my leg.  They hurt a LOT and they usually happen at night and I have to get up and walk them off, which sometimes takes quite a while.  Sometimes my pelvis does this weird clicking thing (that it’s done in past pregnancies) when I try to roll over in bed or get up, but it’s not terrible.   Just a little uncomfortable. 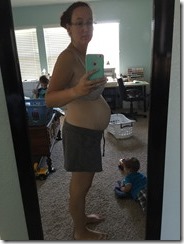 I started checking my blood pressure at home this week more frequently, mainly because of my headaches.  I wanted to make sure I wasn’t getting pre-eclampsia.  They have been high at times.  The systolic number has gotten up to 148 and the diastolic number has gotten up to 89.  140/90 is considered hypertensive which could put me at risk for pre-e.  Normally I’m in the high 120’s/70’s and I can usually get back there if I relax, but on the first takes I’m usually in the 130’s/80’s.  Not too much cause for concern but I’ll keep an eye on it.  My OB didn’t say anything about it yesterday, but that’s not super surprising.  I switched from Dr. Klis to Dr. Patel, who has more GD experience, but I’m not sure I like him much either.  He did the standard belly measurement and I asked him what it was and he said 32 weeks.  I was like What?!?  And he said Why?  Aren’t you 32 weeks?  I was like umm… I’m 29 weeks.  So he “remeasured” and said I was 29 weeks but I’m pretty sure he was just pulling that out of his butthole.  I could have been measuring 25 weeks and he wouldn’t have told me any differently.  It’s annoying and it makes me not trust him.  I also asked the nurse if there was protein in my pee and she, without looking at anything, said “Oh… Um… I don’t think so.”  Great.  Thanks for looking in to that.  I’m kind of sad that this is my last pregnancy and I don’t really like my OB.  Most likely either one of them won’t deliver her anyway so I guess it doesn’t really matter, but it’s disheartening. 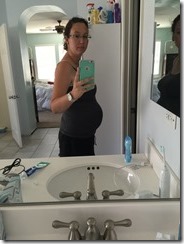 The biggest news is that at 26 weeks I passed my GTT with flying colors.  I was SHOCKED.  Totally and completely shocked as I was sure I’d have GD this time around too.  I was supposed to eat normally 2 hours before the test, but I had to go in the morning so I had eggs one hour before the test because I knew if I drank that stuff on an empty stomach it would make me sick.  And I knew if I ate carbs it would raise my results even more.  So I had 2 eggs and water and that’s it.  I tested with 2 of my meters right before and right after they did the blood draw and my meters said 117 and 129.  The blood draw, which my OB says is the most accurate by far, said 93.  …  That is a HUGE difference and I’m not 100% sure I believe the results.  But the cut off was 135 so either way, my meters or theirs, I passed.  The odds of having GD twice (possibly 3 times) and NOT having it the 4th time is slim to none.  But I’ve been following this GD diet for over a year now and drastically changed my eating habits last August so apparently it’s working.  My OB has told me numerous times to quit testing, but testing occasionally is what keeps me on track.  My numbers have still been pretty good for the most part anyway, so that’s good.  I’ll just keep an eye on them until she’s here, just for my own peace of mind.  And sometimes your numbers start going up at the end of pregnancy anyway, so if they do I want to know.  It makes me a little nervous that I won’t get the extra monitoring I got with Ben and Jamison and even Abbie towards the end of pregnancy, but also a little relieved since the hospital/OB is 50 mins away and I have 3 kids to deal with now too.  I’m not sure how I’d pull that one off taking them to NST’s and BPP’s with me all the time.  But it does make me a little nervous to not have that extra monitoring. 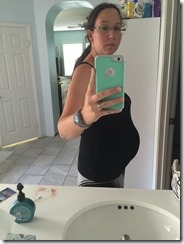 Mark and I took a weekend trip to Vegas and we got to see my good friend Steph and her hubby while we were there.  Steph is due early Oct with her first and it was so fun to see her and talk all things baby, and everything else.  I have a bunch of friends having babies from now until April and all but one of them is having a girl!  Crazy! 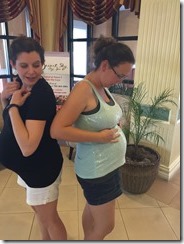 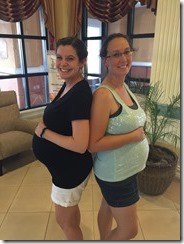 I have been realizing lately that Jamison is going to have some issues when baby girl arrives.  He is still very much the baby of the family and I’m not sure he’s going to handle having a little sibling the best.  I think he will adjust, but it’s going to be rough for him I think, like it was for Abbie when Ben arrived.  J’s arrival was so easy since the big kids were a little bit older, but J is going to be too young to understand why I have a baby on me all the time.  And he’s pretty much used to being on me all the time right now which doesn’t help.  Mark and I call it his reset.  He just needs to come snuggle for 15-30 seconds and then he’s off doing something else again.  But he is a snuggler and he’s not going to like me dividing my attention at all.  Fingers crossed that it’s not as bad as I’m anticipating it to be.  I am sad that he won’t be the baby anymore too.  He’s still SO much a baby to me, it’s hard to believe there’s going to be someone even smaller than he is around again.  I am super excited about her arrival, but I’m sad for Jamison not being the baby anymore. 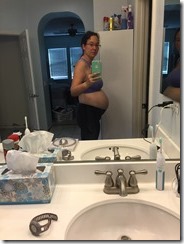 I’ve had a few dreams lately about having her in the car on the way to the hospital.  I am nervous about that drive since I almost didn’t make it with Jamison and the hospital is 3x’s further away now.  I need to get my “deliver baby in car” bag ready and in the car, among other things so if that does happen, we’re at least prepared.  I’m sure worse things could happen but it does make me a little nervous.  I guess I know now that if/when my water breaks I need to at least stay near the hospital, although it was really nice to deliver only 20 mins after I got there last time and do most of the labor at home.  If I could do that again, I would be happy.  And if we didn’t have a NICU stay this time, that would be nice too. 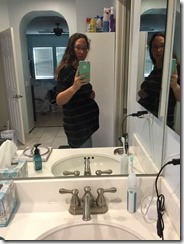 And I think most people that read this blog already know, but we are planning on naming her Josefina Jayne and call her Josie.  So we’ll have J and Josie, which I think sounds cute together.  Jayne is my dad’s mom’s middle name.  We were debating between Jayne and Elizabeth (my mom’s mom’s middle name) but Josefina Elizabeth is a really long name.  And with Jayne we could call her JJ if we wanted.  J and JJ.  We’ll see.  I’m sure I’ll have 15 more nicknames for her before she’s 3 months old, just like I have with the other 3.